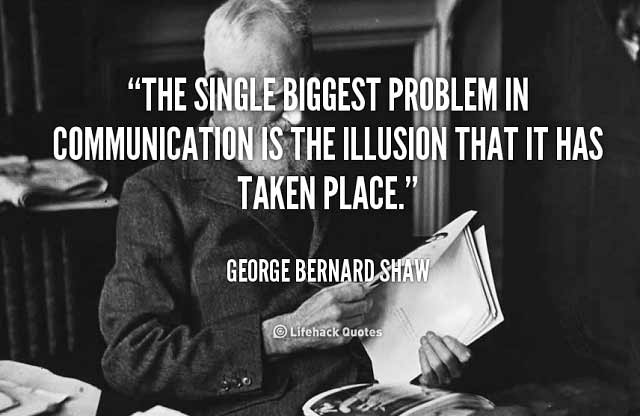 Regardless of your field of study, communication skills are one of the most important determinants of career success. Without them, your best ideas and intentions remain unknown or, perhaps worse, mistaken.

Many of us are blessed with good oral skills but flounder when it comes to putting those words on paper. Even if for the simple fact that employers look first at your written resume and second at your speaking ability, teachers should treat writing pedagogy with the highest form of respect.

Writing well is all about keeping your reader in mind. Readers want sentences to open with subjects that are short, clear, simple, concrete, and familiar. Right after that short subject, they want to see a verb that expresses an important action. And at the end, they want new information presented with a punch.

While it’s easier to see sprawl or inelegance in the writing of others than in your own – if only because you know what you want your sentences to mean before you read them – it is not as difficult as you may think to remain in control of the way you communicate.

Below are 15 tricks you can use in the classroom to help students get their messages across.

“In literature the ambition of the novice is to acquire the literary language; the struggle of the adept is to get rid of it.” – George Bernard Shaw

The Federalists’ argument in regard to the destabilization of government by popular democracy was based on their belief in the tendency of factions to further their self-interest at the expense of the common good.

This sentence is unclear because most of the actions are nouns, not verbs: argument, destabilization, belief, tendency.

The Federalists argued that popular democracy destabilized government, because they believed that factions tended to further their self-interest at the expense of the common good.

This sentence is clear because all the actions are verbs: argued, destabilized, believed, tended.

Our lack of data prevented evaluation of UN actions in targeting funds to areas most in need of assistance.

The same problem can be found here, and solved here:

Because we lacked data, we could not evaluate whether the UN had targeted funds to areas that most needed assistance.

Select a passage that reflects poor writing skills and have your students highlight or circle the main subject and verb in each sentence. Chances are, the subject will often be “it” and the main verb will be “is” or some other form of “to be.” Here is an example:

“Reading a children’s book with pages is very different yet similar to reading a children’s book on a web page that includes animation and sound. Both are interactive but require different skills to be able to read either one. It is only now in the year 2000 that reading a story from the Internet is a common occurrence where five years ago it was a very foreign, strange idea.

Because computer technology is so recent, it is hard to not constantly compare it to the previous technology which we are so used to: the printed book. It is hard to accept the difference between feeling the pages, touching the paper, and reading the story from front to back. But now it is possible to have animation illustrating the text, sound highlighting the actions, and different options for the sequence of the text.

Even though the children of the millennium are accustomed to technology at an early age, the approach to the computer is still different than that of a book.”

4. Use Only the Words You Need

Cohesion: Pairs of sentences fitting together the way two Lego pieces do

Coherence: Seeing what all the sentences in a piece of writing add up to, the way a hundred Lego pieces create a building, bridge, or boat

Which sentence below would you say is the more active of the two, as they stand, alone?

In the first sentence, “create” is an active verb; in the second sentence, it is passive.

But which of the two sentences fits best within this paragraph?

Some astonishing questions about the nature of the universe have been raised by scientists studying black holes in space. [_____]. So much matter compressed into so little volume changes the fabric of space around it in puzzling ways.

Even though sentence (a.) is a better sentence on its own than sentence (b.) because it is more active, sentence (b.) actually fits more cohesively within the paragraph because it begins with the words we were just introduced to at the end of the previous sentence. If we plugged in sentence (a.), the first concepts we hit are collapsed stars and marbles, information that seems to come out of nowhere.

Some writers try to fake coherence by littering their prose with conjunctions like thus, therefore, moreover, consequently, and however regardless of whether they signal real, logical connections:

“Because the press is the major medium of interaction between the president and the people, how it portrays him influences his popularity. Therefore, it should report on the president objectively. Both reporters and the president are human, however, subject to error and favoritism.”

Good communicators depend more on the clear flow of their ideas.

“Beginning and end shake hands with each other.” – German proverb

8. Shift peripheral ideas to the left.

9. Shift new information to the right.

Keep the following points in mind as well:

10. Use the stress of a sentence that introduces a passage to announce the key concepts that the rest of the passage will develop.

11. Use the end of a sentence to introduce long, complex, or otherwise difficult-to-process material, particularly unfamiliar technical terms and new information.

12. Use the stress position at the very end to emphasize words that you want your readers to hear emphasized in their mind’s ear.

“The structure of every sentence is a lesson in logic.” – John Stuart Mill

Generally, we don’t have patience for sentences that open with long introductory phrases and clauses, because as we read them, we have to hold in mind that the subject and verb of the main clauses are still to come, and that frustrates easy understanding.

You may be accustomed to telling your students not to write long sentences, but in truth you cannot communicate every complex idea in short ones, so you have to know how to write a sentence that is both long and clear. This is where shape comes in.

13. Get to the Subject Quickly.

14. Get to the Verb and the Object Quickly.

15. Use Modifiers to Extend Sentences.

Resumptive: When we discovered the earth was no the center of the universe, it changed our understanding of who we are, an understanding changed again by Darwin, again by Freud, and again by Einstein. (You resume the word “understanding,” allowing you to add further information).

You can place a free modifier at the beginning of a sentence, too; hence, the term “free”:

Driven by an insatiable curiosity and haunted by a vision of artistic perfection, Leonardo DaVinci was a man of powerful intellect.