Students As Creators: How To Drive Your Students To Be More Than Just Consumers 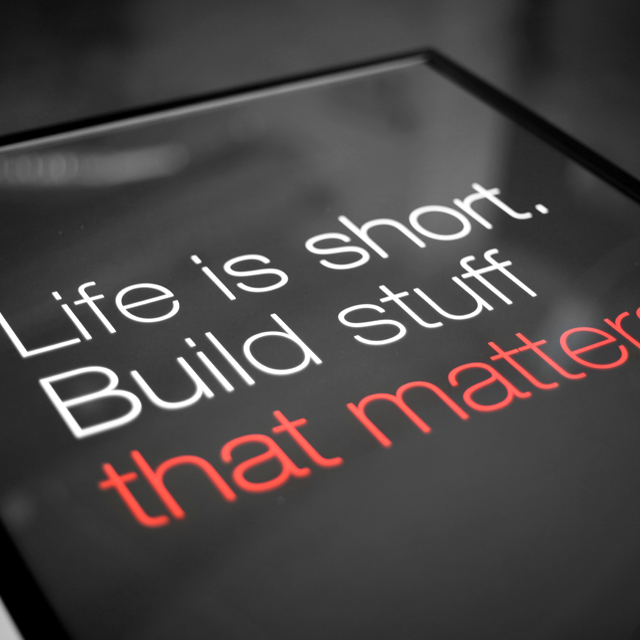 One trend we are going to see in education that hasn’t received much discussion yet is the shift from students as consumers to students as creators. This is part of, but not the same thing as, the Maker Movement. In fact, it may usefully be described as what needs to happen before the Maker Movement can reach its full potential.

Traditionally, students are trained to consume large amounts of information over the course of the first twenty-some years of their lives, culminating in what we call an education. Engagement and interaction are necessary and universal parts of the process, but creation traditionally is not. Creation–the act of producing something new with what you’ve learned–resides on the back burner, invited into the spotlight when it is needed and of peripheral importance when it’s not.

Shouldn’t students be creating at least as much as they are consuming?

Granted, we’ve learned to cultivate creative impulses in our students, to bring out the best of their inner talent, and even to test for creative thought over factual content. But shouldn’t creativity be more fundamental, more tangible than this? Shouldn’t it be the rule, and not the exception? And shouldn’t our students be creating at least as much as they are consuming?

These questions, among others, need to be addressed before we remove the scaffolding of the Maker Movement and aim for widespread adoption. Only when pedagogy acknowledges creation–not just being creative, but actually making something–as the very basis of deep learning will we be able to say we’ve made this shift.

Why Is It Important to Create?

In the modern world, the skills and qualities that we associate with creativity and ingenuity are required to help us work more effectively together. Being able to come up with new ideas and solve everyday problems is also important for people on a personal level. It plays a critically important role in learning and personal development, as well as building self-esteem.

Being able to come up with new ideas and solve everyday problems is also important for people on a personal level. It plays a critically important role in learning and personal development, as well as building self-esteem.

Creativity can also make you smarter. Jennifer Wiley’s lab at the University of Illinois at Chicago found that a certain dose of alcohol (a “creativity-booster”) helped participants solve tricky word problems. Mareike Wieth and Rose Zacks demonstrated that undergrads were better at solving insight-based problems when they tested during their least optimal time. This means that night owls did better in the morning while morning larks did better in the afternoon.

Counter-intuitive findings like these scattered psychology journals and made for catchy headlines in the press. The neuroscience of creativity has been flourishing for nearly a decade. In 2008 the journal PNAS published a paper by researchers from the University of Michigan demonstrating that participants who played a difficult working memory game known as the n-BACK task scored higher on tests of a fundamental cognitive ability known as fluid intelligence: the capacity to solve new problems, to make insights and see connections independent of previous knowledge.

In other words, the task made people smarter. Oshin Vartanian, Adjunct Assistant Professor at the University of Toronto-Scarborough, explained that a lot of researchers are excited about this finding.

“The 2008 paper has had a profound effect on how creativity researchers think about creativity. Now scientists are working on replicating the results and figuring out if intelligence gained from the n-BACK task transfers to other domains.” The hope is that “cognitive training” will help children and adults boost creative output. “The application of this research is probably the most exciting idea in the cognitive science and neuroscience of creativity,” says Vartanian.

For CEOs, creativity is now the most important leadership quality for success in business, outweighing even integrity and global thinking, according to a new study by IBM. The study is the largest known sample of one-on-one CEO interviews, with over 1,500 corporate heads and public sector leaders across 60 nations and 33 industries polled on what drives them in managing their companies in today’s world.

About 60% of CEOs polled cited creativity as the most important leadership quality, compared with 52% for integrity and 35% for global thinking. Creative leaders are also more prepared to break with the status quo of industry, enterprise and revenue models, and they are 81% more likely to rate innovation as a “crucial capability.”

What’s more, there appears to be no doubt that creativity is of great economic importance. Sir Ken Robinson estimates that, during 1988 the financial contribution generated by creative industries in the UK amounted to £6 billion. By 1998 this figure had grown to £60 billion–a ten-fold increase. Employment in these industries grew 34% over the same period against a background of almost no growth in the economy as a whole.

Creativity, therefore, is widely regarded as a vital component of economic growth.

But Robinson recognises that it is not simply about employing more people in the creative industries. The qualities associated with creativity and ingenuity are needed at all levels in both the private and public sectors. The increased pressure of competition has heightened the need for employers to be customer focused and working to achieve continuous improvement. This requires people at all levels use initiative when making decisions and to think differently. And it all starts with the quality of your education.

The charge that educational institutions fail to promote creativity is by no means new. A host of well-known educational thinkers and practitioners such as Froebel, Montessori, Steiner, Dewey, Piaget and Bruner have strongly espoused the importance of creativity in education over the past 100 years and several have set up their own organisations that operate on the fringes of mainstream education

What is new is the rapidly growing evidence that points to creativity as an economic and societal solution to many of today’s problems.

“Understanding, identifying, and nurturing the creative potential is relevant in education if we want students able to solve academic and personal problems and challenges, to find innovative solutions and alternatives, and to have better tools and resources for success in a fast-changing world,” says Dr. Rosa Aurora Chavez-Eakle, Founder and Director of Washington International Center for Creativity. “Creative thinking not only enhances our ability to adapt to our environment and circumstances but also allows us to transform those environment and circumstances.”

It’s adaptability that creativity equips us with, and in today’s fast-changing world, it’s a priceless quality to have.

“If our goal is to teach and nurture future scientists, artists, engineers, entrepreneurs we need to understand and nurture the creative potential because creativity has provided the foundation for art, science, philosophy, and technology,” says Chavez-Eakle. “If we want to teach children to become productive human beings, and more satisfied with what they do with their lives, we need to support them in the process of discovering and enjoying their creative potential.”

We all have to consume information in order to gain knowledge, but that’s only half of the equation. Creating is the other half, and in many cases the better half. So how do we get students in the habit of doing something with the knowledge they’ve acquired? Below are a few recommendations.

1. Begin and end every class period with a creation.

It doesn’t much matter what it is–a candy molecule or a quick sketch of the geological record–as long as it gets the creative juices flowing and leaves the student curious and inspired when the bell rings. You’ll have to keep it timed, of course, and relevant to your lesson, but I guarantee the payoff will be worth it.

Or, at least, don’t let your students expect you to. Talking the whole time–even if you stop to ask questions or divide students into discussion groups–will only allow students to passively consume, and subsequently forget, what you are teaching them. Creation must be a part of every class period.

3. Require students to create products for other students.

Psychological research does not support long content-based exams administered mid-way through the term and again at the end of the term. But it does support weekly quizzes, which reinforce what we’ve learned more firmly in our memory than if we cram before major exams. Mid-terms and finals are completely necessary, but you should be assessing how well (and creatively) your students might use what they’ve learned in the real world–not how well they remember content.

5. Require an ongoing project that lets students record their own learning.

It might sound funny, but the best way for students to retain new information is to remain conscious that they learned it. However they want to record their progress–visually, literally, aurally–is up to them. Ask them to keep track of it independently, and have them submit it throughout the term not to be assessed but to make sure they are doing it.

6. Do not use physical textbooks; use only interactive learning material.

Why require passive readings when you could require active ones? Keep your eyes peeled for online versions of textbooks (which you can write yourself, by the way) with interactive features like embedded videos and space for note-taking.

7. Apply a cross-disciplinary approach whenever possible.

Nothing enhances creativity like discovering connections between two seemingly unrelated subjects. Apply science to art, art to science, poetry to math, and psychology to performance theater as often as you can.

8. Require creation in every assignment.

This is an important one. Most college homework these days consists of reading or writing. You’ll be astonished at the transformation that can take place in student learning and motivation when they are required to DO something with what they have consumed.

9. Let students create their own syllabus.

It’s common for instructors to pass out notecards at the beginning of the term, asking students what they’d like to learn or get out of the class. Take this a step further and ask them (perhaps as an early assignment) to create their own detailed syllabus, either from scratch or as an edited version of the one you’ve already cooked up.

10. If you don’t create something, talk about creating something

Class discussions are often centred around theory, but you can easily shift the topic to touch on practice. This may be easier said than done, especially in English or philosophy courses, for example, but the simple act of trying it out will almost certainly lead to interesting and meaningful discussions.

This is a big trend sweeping educational institutions across the globe. More institutions are building physical paces where students can learn and create together, integrating content-and-product-based activities as part of their instruction. Don’t be late to hop on this wagon–students are flocking towards these spaces with enthusiasm and talent.

Highlight the strange, unique, exotic aspects of your subject. Touch on uncharted territory. Meditate on the mysterious. Students will stop consuming–and start thinking–if they sense an unfamiliar concept.

It’s easier NOT to shake things up, of course, but it’s also easier to stop at McDonald’s than to make a meal from scratch. That little bit of extra effort will go a long way when it comes to keeping your students interested.

Every creative act is a risk. We should remind students as often as we can of the countless rewards that come from leaving the well-beaten path.

Learning mistakes come in many forms–wrong answers, misheard instructions, poorly understood concepts–but should always be recognised as natural, even beneficial. Students today are just as terrified of failure as they ever were, and it’s our job to let them know they won’t succeed without it.