10 Ways to Retain More of What You Learn 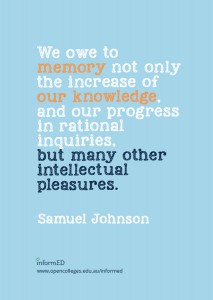 Although reading something once or twice and then remembering it for life would be ideal, the reality is that much of what we learn goes in one ear and out the other. In fact, research shows that within just one hour, if nothing is done with new information, most people will have forgotten about 50% of what they learned. After 24 hours, this will be 70%, and if a week passes without that information being used, up to 90% of it could be lost.

If we want our learning to stick, we need to be doing more than just reading a textbook or passively listening to our teachers. Of course, most learning will inevitably involve some reading and listening, but by using a variety of techniques to cement new information in our minds, we’ll be far more likely to retain it in the long-term. With this in mind, here are ten strategies to help you get the most out of the time you spend studying.

When you engage more of your senses in the learning process you’ll be better able to recall what you learn, and research shows that visuals in particular can help us to retrieve information more easily. In one study, researchers found that students who used visual associations to remember groups of words had significantly better recall compared to those who had simply repeated the words over and over.

Visuals have also been shown to transmit messages faster and improve overall comprehension, so whenever possible, try to use visual learning aids such as instructional videos, documentaries, infographics, photos, maps and charts to enhance your learning.

In order to retain what you’ve learned, you need to understand the topic inside out, which is why demonstrations can be very effective. Unlike simply reading or listening to an explanation, demonstrations show you how something works and help you visualise the concept.

So if you’re developing a specific technical skill, whether it’s photography, web design, or cooking, find a teacher or even a friend or relative who is knowledgeable on the subject and can give you a demonstration. If this isn’t possible, you could also look for instructional videos that demonstrate what you’re trying to learn.

Discussing what you’ve learned, whether immediately or a few days down the line, is important because it forces you to actively process the material. Research also shows that group discussions can improve student engagement, which in turn benefits long-term retention.

So whenever possible, try to participate in group discussions where you’ll have the opportunity to go over the material you’ve learned, gain new perspectives and discuss any potential misunderstandings. If you’re not studying in a traditional setting and can’t discuss your learning with classmates face-to-face, group discussions can still take place through online forums or web conferencing services.

4. Put It Into Practice

Putting your learning into practice is important for cementing it in your mind, because practice creates new neural pathways in the brain. Each time you practise a new skill or apply some new piece of information in a practical way, those pathways are strengthened and you’ll be less and less likely to forget what you’ve learned.

For example, if you’re learning a new language, you could practise by finding native speakers to converse with, reading children’s books, or watching foreign language films. If you’re studying photography, you could make an effort to get out every day with your camera and practise the techniques you’ve been reading about.

5. Look For Opportunities to Teach Others

Unless you’re an expert on a particular topic, you probably wouldn’t consider teaching it to others, but research shows that explaining a concept to someone else is the best way to learn it yourself.
One study in particular found that when students thought they would have to teach the material they were learning to someone else, they were not only better at choosing and organising the most important information but also remembered it more accurately later on.

With this in mind, if you really want your learning to stick, you may want to consider looking for someone to tutor or offer to help your fellow students with their homework.

6. Relate New Material to What You Already Know

When you’re learning something completely new, one way to help it stick in your memory is to connect it with something you have already learned. In one study, participants who were provided with relevant cues before listening to prose passages were better at recalling them later than those who had received no cues or contextual knowledge beforehand.

The researchers explain that if prior knowledge is available and accessible, it becomes easier to retain new incoming information too. So, for instance, if you know you’re going to be learning about Roman history, spend some time thinking about and writing down what you already know about the topic before you begin studying.

7. Make an Effort to Retrieve Information From Memory

Don’t be too quick to grab your textbook or consult Google when you can’t remember some important piece of information. Instead, try to remember what you’ve already got stored away in your brain.
When you’re forced to recall something from memory, your brain revisits the pathways that were created when the memory was first formed. The more you revisit those pathways, the stronger they’ll become, and the chances of you forgetting that same information again in the future are slim.

If you want to retain something you’ve read you’ll have a better chance of doing so if you read it out loud. Researchers from the University of Waterloo found that when people read a list of words out loud, their memory of the words was a lot better than when they’d read them silently. The researchers explain that when we read something out loud, it becomes more distinctive, because we end up with a memory of both reading the words and hearing them spoken out loud. Of course you probably wouldn’t be able do this in class or at a library, but if you’re studying at home or in a study group, make a point of reading important pieces of information out loud.

Although most students these days prefer to type than write by hand, the act of putting pen to paper is still important when it comes to committing new information to memory. One reason for this is that writing by hand typically requires more effort and takes longer than typing, which forces the brain to fully engage with the new material.

In one study, researchers asked university students to take notes while watching TED talks. When tested later on, the students who had used laptops performed worse on conceptual questions, even though they had been able to write down more words than those who took notes by hand.

So if you’re trying to write quickly, use a laptop, but if your goal is to fully understand and remember the information you’re writing down, you’ll be better off using a notebook and pen.

Cognitive scientists have also found that our attitudes towards mistakes predict how much we’ll learn from them. People who believe intelligence can be improved through learning and practice are more likely to pay attention to their mistakes and try to figure out where they went wrong, whereas those who believe intelligence is fixed are less likely to learn from their mistakes.

Try to view your mistakes as a part of the learning process and don’t be too hard on yourself the next time you make a blunder. Even if you feel a little silly blurting out the wrong answer in front of your classmates, at least you won’t have to worry about getting that particular question wrong again.