Why Feedback Should Come in the Middle, Not at the End

By Saga Briggs May 4th, 2016 No Comments Features 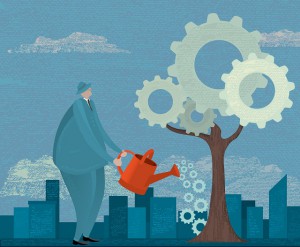 Traditionally, we give and receive feedback at the end of projects, assignments, and units. But is this the best way to ensure progress? Researchers are saying it’s not, especially when it comes to encouraging creativity. For optimal academic achievement, teachers and students should consider placing feedback somewhere in the middle.

In their study, “An Inductive Study of Feedback Interactions Over the Course of Creative Projects,” Spencer Harrison of Boston College and Elizabeth Rouse of Boston University examined groups of modern dancers and designers for an award winning research and development department to find out how the creative process is nurtured and encouraged through feedback. Their data, collected over two years, was compiled from 88 audio and video recordings, interviews, and focus groups. The researchers found that successful feedback included the following elements:

1. A creative person’s willingness to share incomplete work
2. The need for constructive, two way conversations
3. The desire of feedback providers to really understand the process
4. The realisation that the two parties are on a journey together

“Traditionally when we think about feedback, we think about the manager who knows what an employee’s performance should look like; they’re able to objectively measure how the employee is doing and kind of agree on how the performance has gone,” says and lead author of the study published in the Academy of Management Journal. “But when you’re doing something that’s inherently creative, the whole point of creativity is you don’t know what the outcome is supposed to look like when you’re starting off. So now all of a sudden, both worker and feedback provider are in completely different positions than what a classic feedback situation entails, and we just didn’t know very much about what that feedback situation should look like. How do people actually guide others down a path when they don’t know what the outcome should be, when they’re kind of both discovering newness along the way?”

“It blows apart this myth that for decades, people kind of assumed, ‘Well, if you’re going to be creative, you need to brainstorm’ and one of the rules of brainstorming is you don’t judge, you don’t criticise, you don’t provide feedback basically,” says Harrison. “And so people have created in some ways a false aversion to the relationship between feedback and creativity. If you want someone to be creative, the myth is you just leave that person alone, that person will figure it out on their own, and when it’s ready, that person will bring you a finished iPhone or a finished whatever the next great product is. The reality is that creative people actually want people to provide input on their ideas—they just want it done in the right way, in a safe environment, in a way that honors what they’ve done in the past.”

Sharing incomplete work might sound like an odd practice, but in creative settings it’s a good idea because it encourages feedback that is focused on developing an idea rather than evaluating it at the end:

Effective feedback must involve a conversation between creative workers who are receptive to help and feedback providers who aren’t too proud to ask questions.

“What was really kind of surprising to us was this idea that the feedback starts off with the feedback providers trying to understand what the creative workers are doing and what sort of terrain they’ve already turned over in figuring out what the product is going to look like,” says Harrison, who says these conversations lead to an opportunity where the creative worker admits he/she isn’t sure where he/she is headed next.

“A lot of feedback isn’t ‘This is what you should do,’ it’s actually ‘Where have you been? Where are you going?’ and really trying to figure out what people have been thinking about before you ever showed up to assess what it is they are working on.”

Setting aside time to express sincere interest in another person’s work helps create a mutual respect between the two parties that, according to the study, “can positively influence an individual’s creative performance and lead to the generation of more ideas.” This also means that, just because someone might be in a position to provide feedback, it doesn’t mean he/she has all the answers.

“One of the cool things we see is that a lot of the feedback isn’t like, ‘You should do this.’ It was more open-ended, like ‘What would happen if we thought about this this way?’ So this fine kind of analogical and metaphorical thinking, the curiosity questions, really spurred the conversations to move things along that way.

“There were moments when we did see people start spewing advice: ‘You should do this, you should do that,’ and our analysis shows that never really led to big changes in the products people were designing. When feedback providers don’t wait for these openings, when they don’t understand each other, then the feedback they are giving doesn’t seem to be as effective.”

Harrison believes the study’s findings can help improve the quality of feedback in a variety of industries and fields, from business to education.

“Any business that sees creativity can help them at some level with their competitive advantage, then what we’re finding is really crucial,” says Harrison. “Part of the other reason is that for hundreds of years, people have mythologised the creative process as this sort of black box where we don’t really understand what’s going on, and these sort of feedback meetings where you say, ‘Work on it for four weeks and then bring it in and show us, and we’ll help you develop this further.’ That’s one moment where the black box is open, and managers and other employees have an opportunity to kind of help smooth something along, and so organizations really need to take advantage of those moments because if they don’t understand that the rules for providing feedback in that moment are very different than the classic rules for performance evaluations, then they’re going to mess those moments up and they’re likely to mess up the evolution of that creative product.

“If you have these moments where you can get a lot of eyeballs on it, opening up that black box and revealing ‘Here’s where we’re at, at this point,’ and if you understand the rules for how to have that conversation in a developmental way, that’s hugely important for people that are trying to leverage creativity to help their businesses grow and be competitive,” says Harrison. “If these organisations are not able to create an environment where someone is able to spitball an idea, and they can work with that idea and help a person develop it into something that’s useful, then they’re missing out on a huge opportunity there that can revitalise their business or give them a new edge strategically or a new customer base to work with.”

The researchers also suggest that since feedback and creativity are both meant to generate change, employers need to “take full advantage of review meetings that are built into creative projects,” while employees should “enter with open minds and a desire to completely comprehend what is at hand.”

Harrison adds: “If you’re going to provide feedback on somebody’s creative product, I think that you really need to take the time to understand what they’re trying to do with it, ideas that they have already gone through to get to that prototype, and where they’re going in the future before you just start providing recommendations,” says Harrison. “I think as a creative worker, it’s being willing to walk into those sorts of meetings with something half-finished and kind of waiting for the opportunity to be open and allow people to provide feedback and constructive criticism of what it is you’re doing. Most importantly, organisations have huge opportunity with these sorts of meetings. And my sense is a lot of them are probably blowing it because they don’t understand that the rules for providing feedback in that scenario are very different than the rules they are used to in other scenarios.”

How to Apply These Findings to Education:

1. Always ask questions before you give feedback.

You need to understand what someone is trying to achieve before you can assess how well they’ve achieved it. The researchers mention the importance of “curiosity questions,” or questions that spur brainstorming and creative thought. A few examples are as follows: “What was your main goal with this (project, assignment, task)?” “Am I right in thinking that you’re trying to…?” “Can you clarify this part for me?” “Do you think you achieved what you intended to achieve?” Really try to see where the person has come from and already gone and explored. People are more experienced and smarter than we give them credit for.

2. Put yourself in your students’ shoes.

How would you prefer to receive feedback? Wouldn’t it be helpful to hear it in the middle, when you can use it, rather than at the end, when you’re glad to be done? Empathising with students, colleagues, and peers will carry you a long way and earn you a reputation as a mentor and guide who provides useful advice in a respectful manner.

Keep it philosophical. Ask questions that begin with “What if…?” and “I wonder…” and “Have you thought about…” and “Do you think…” Make it a two-sided conversation and an equal exchange. Call it a workshop. Treat the work as a process, not a product. Hold students accountable for the effort they put into it, but realise that effort might look different at different stages of a project.

Again, projects should be about developing ideas, not churning out finished work. You might try requiring students to submit drafts of essays, not just the final version. Not only does this allow room for ideas to grow, but it also takes the pressure off students—no longer feeling like they must strive for perfection, they can relax enough to enjoy the work and put quality effort into their writing.

5. Assess the work, not the person.

Step back and examine your biases. After we get to know our students, we tend to expect poor quality work from some and high quality work from others. This is a dangerous mindset to fall into. You might try having students submit work anonymously, or give them numbers to put on each assignment instead of names, in order to judge work fairly and give feedback objectively. Offering feedback in the middle of an assignment gives us a chance to overcome our biases and actually help those “poorer” students improve, not just hope that they miraculously turn over a new leaf.