How Storytelling Can Enhance Any Learning Experience 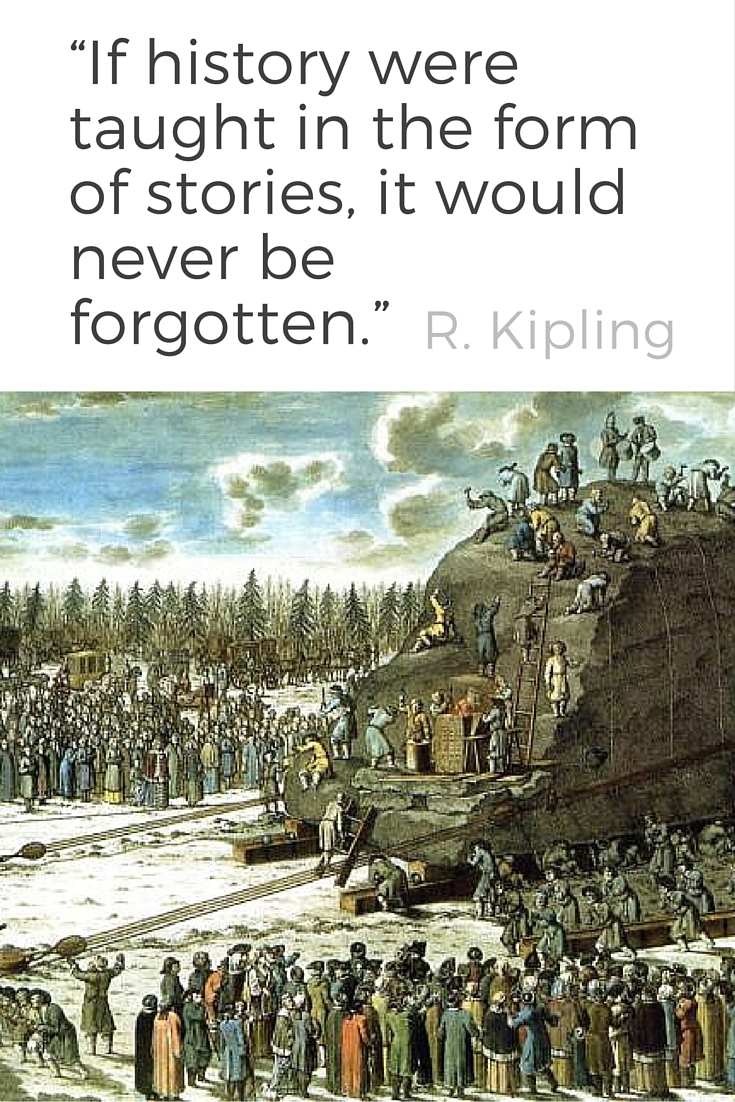 Hemingway once wrote a six-word novel that reads as follows: “For sale: baby shoes, never worn.” What makes it famous, other than the author? Neuroscientist Paul Zak would say a) its appeal to the brain’s short attention span, b) the power of its emotional impact, and c) the surprising economy of the two combined.

Researchers are discovering just how powerful an effect a good story can have on the brain, and not just in terms of entertainment. A memorable yarn can also help us retain important information, both in casual and formal learning settings.

“A story is the only way to activate parts in the brain so that a listener turns the story into their own ideas and experience,” says Gerry Beamish, who researches the value of storytelling in accelerating learning. “In terms of influencing there is nothing more powerful than people thinking that the idea is their own.” When people believe the idea is their own, he says, they “put all their energies behind implementing it, thus reinforcing culture/values and facilitating learning and change.” What better way to summarise the educational potential of storytelling?

Below we dive a little deeper into the science behind storytelling and identify some of the modern pioneers of the practice.

“Storytelling is an enduring form of communication,” says the University of Georgia’s Diann Moorman, PhD. “Although many educators use storytelling in their classrooms, the stories are often presented spontaneously and may not be considered integral to the day’s learning and teaching activities. In fact, in many fields, the perception exists that storytelling is not a real learning tool.”

Her latest study, This Is Not a Fable: Using Storytelling in a College Classroom to Enhance Student Learning, demonstrates that students recall information tied to storytelling better than material presented without storytelling. Using data collected from in-class examinations and on-line quizzes, she and her colleagues found that information tied to storytelling is recalled more successfully for the current semester’s examinations than material presented without storytelling. That same material was also retained by students long after the semester was over.

But why exactly does storytelling aid learning and memory?

According to Paul Zak, Director of the Center for Neuroeconomics Studies at Claremont Graduate University, stories capture our attention better than other information because they leave a physical and emotional trace in the brain.

“As social creatures who regularly affiliate with strangers, stories are an effective way to transmit important information and values from one individual or community to the next,” Zak writes. “Stories that are personal and emotionally compelling engage more of the brain, and thus are better remembered, than simply stating a set of facts.”

Part of the reason behind this is evolutionary: We attend to stories, Zak explains, because “we intuitively understand that we, too, may have to face difficult tasks and we need to learn how to develop our own deep resolve.” In essence, we learn because we can’t help it, which is the most natural and lasting type of learning.

But not all stories are created equal. Researchers have discovered that there are two key aspects to an effective story: attention and transportation. Structurally, the best stories always have an increasing level of tension (attention); materially, there should be a protagonist who faces some sort of stressful challenge or conflict, something that draws attention because it’s engaging emotionally and intellectually (transportation).

Since oxytocin has been shown to make people more sensitive to social cues, Zak says stories that keep people’s attention have to be character-driven. “You can tell a war story or something with a lot of action that will grab your attention,” he says, “but you still need a personal story, someone to empathise with. We need to have that social aspect for it to resonate with us.” He adds: “We watch a flickering image that we know is fictional, but evolutionarily old parts of our brain simulate the emotions we intuit [a character] must be feeling. And we begin to feel those emotions, too.”

Narratologists call this phenomenon “transportation,” and it’s often just as physical as it is mental.

Researchers at Emory University have detected what may be actual changes in the brain that linger, at least for a few days, after reading a novel. Their findings, published in the journal Brain Connectivity, came from observing twenty-one Emory undergraduates, who all read the 2003 thriller “Pompeii,” over nineteen consecutive days.

“The story follows a protagonist, who is outside the city of Pompeii and notices steam and strange things happening around the volcano,” says neuroscientist Gregory Berns, lead author of the study and the director of Emory’s Center for Neuropolicy. “He tries to get back to Pompeii in time to save the woman he loves. Meanwhile, the volcano continues to bubble and nobody in the city recognises the signs.”

The researchers chose the book due to its page-turning plot. “It depicts true events in a fictional and dramatic way,” Berns told Science Daily. “It was important to us that the book had a strong narrative line.”

Each morning for five days, the participants came in for a base-line fMRI scan of their brains in a resting state. They were then given nine sections of the novel, about 30 pages each, over a nine-day period, asked to read the assigned section in the evening, and come in the following morning. After taking a quiz to ensure they had finished the assigned reading, the participants underwent an fMRI scan of their brain in a non-reading, resting state. Then they completed all nine sections of the novel and returned for five more mornings to undergo additional scans in a resting state.

The results showed heightened connectivity in the left temporal cortex, an area of the brain associated with receptivity for language, on the mornings following the reading assignments.

“Even though the participants were not actually reading the novel while they were in the scanner, they retained this heightened connectivity,” Berns says. “We call that a ‘shadow activity,’ almost like a muscle memory.”

Heightened connectivity was also seen in the central sulcus of the brain, the primary sensory motor region of the brain. Neurons of this region have been associated with making representations of sensation for the body, a phenomenon known as grounded cognition. Just thinking about running, for instance, can activate the neurons associated with the physical act of running.

“The neural changes that we found associated with physical sensation and movement systems suggest that reading a novel can transport you into the body of the protagonist,” Berns says. “We already knew that good stories can put you in someone else’s shoes in a figurative sense. Now we’re seeing that something may also be happening biologically.”

The neural changes were not just immediate reactions, Berns says, since they persisted the morning after the readings, and for the five days after the participants completed the novel.

“It remains an open question how long these neural changes might last,” Berns says. “But the fact that we’re detecting them over a few days for a randomly assigned novel suggests that your favorite novels could certainly have a bigger and longer-lasting effect on the biology of your brain.”

Scientists have found similar effects from auditory storytelling as well, which is good news for teachers interested in incorporating stories into their lectures.

“Audio is one of the most intimate forms of media because you are constantly building your own images of the story in your mind and you’re creating your own production,” says Emma Rodero, a communications professor at the Pompeu Fabra University in Barcelona. “Like reading, listening to audio allows people to create their own versions of characters and scenes in the story. But listening, unlike looking at a written page, is more active, since the brain has to process the information at the pace it is played.”

Visual storytelling yields even stronger effects. Neuroscientists have found that watching emotional films, for instance, enhances learning even more than reading or listening to the same story.

Organisations around the world are beginning to deliberately integrate storytelling into their programs and courses, and the educational potential is limitless. Let’s take a look at some of the names at the forefront of the movement.

In June 2012, an unprecedented gathering of writers and social justice advocates—among them novelist Colum McCann—convened to dream about how the world could be transformed through story. The result is Narrative 4, an endeavor that has gone global. Going into schools and other communities, N4 aims to foster “fearless hope through radical empathy” via story “exchanges” in which two people share their stories and then each retells the other’s.

Dave Isay’s now-legendary oral history project began in 2003 with one recording booth in Grand Central Terminal. From then on, people began to tell their stories—the mother who forgave her son’s murderer, two former students who recalled their formidable Sunday school teacher. Twelve years and more than 50,000 recording sessions later, these individual stories constitute a legacy. Join the contributors or listen in at storycorps.org.

Davia Nelson and Nikki Silva are radio anthropologists. These Peabody Award–winning journalists have dedicated their lives to uncovering the origins of folk traditions—burgoo, Russian “bone music,” Jamaican “chicken pills”—and recording the stories of the everyday people who contributed to their evolution. Their work, including two Tina Fey–narrated Hidden World of Girls programs, can be heard on NPR or on their website.

It’s only five years old, but this exhilarating blog launched by street photographer Brandon Stanton has nearly 20 million followers who delight in its daily portraits of the colorful characters populating New York City. A little girl blowing bubbles, elderly neighbors chatting on the sidewalk, a dog walking itself on Eighth Avenue: Stanton finds splendor in the ordinary, and every day posts new pictures he snaps along with captions in the words of his subjects.