How Integrating Arts Into Other Subjects Makes Learning Come Alive 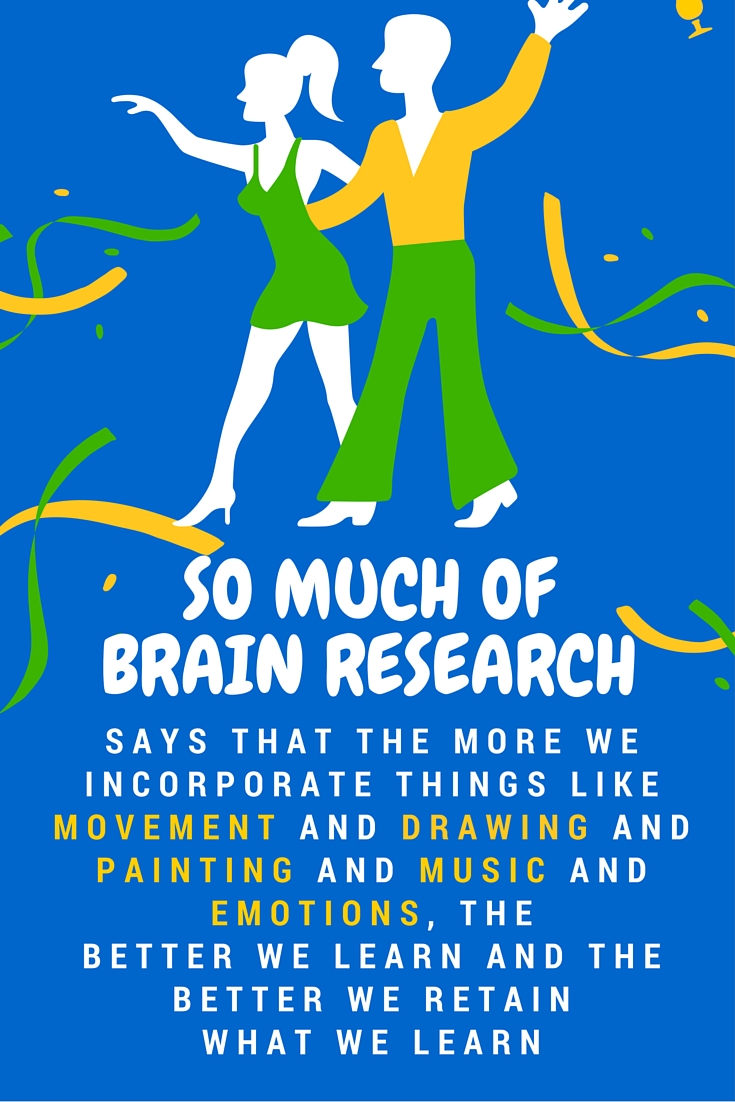 In the U.S., many four-year postsecondary institutions fall under the category of “liberal arts.” This term has nothing to do with political leaning, and doesn’t necessarily refer to art as a subject. Instead, it refers to the freedom to study a diverse array of subjects, treating each of those subjects like “an art,” and approaching it with the expectation to acquire not just knowledge, but a new way of thinking. When treated as an art, a subject becomes more than a series of rules to memorise; it becomes a foreign language, a unique discourse to master.

It’s this more philosophical definition of “art” that can turn arts education into a powerful interdisciplinary tool, and we need to start adopting it now. As we’re starting to see–with the addition of the letter “A” in the STEM acronym and various motions to save arts programmes around the globe–art is no longer being thought of as an indulgent, introspective practice that exists only within its own disciplinary parameters. On the contrary, it’s becoming clear that students of all subjects benefit from–even need–engagement with the arts in order to fulfill their academic potential. So let’s take a moment to consider art’s place in modern education–without defaulting to visions of fingerpainting and drama club.

How Can Art Help?

Six years ago, at what used to be Wheeler Elementary in Burlington, Vermont, district leaders began having conversations with community members about turning the institution into a magnet school focused on both art and academics. Now, Wheeler is called the Integrated Arts Academy (IAA), and students aren’t just good at art. In mathematics, test scores have risen from 17 percent under the original curriculum to 66 percent under the integrated curriculum.

How did they do it?

Bobby Riley, IAA’s principal, says it’s about creative confidence: Higher analytical thinking and reasoning and student voice fit so well with the arts, he told MindShift’s Katrina Schwartz. As teachers build more subjective components into their assignments and lessons, students respond by feeling more comfortable with their own voice, even if the subject is math or science.

For instance, one teacher’s fourth-grade lesson on geometry examined the work of the famous Russian artist Wassily Kandinsky. Students discussed his work and then created their own art using angles in the style of Kandinsky. They were then asked to identify the angles they’d used and point them out in their art.

In Ohio, educators are also using the arts to focus on big ideas. Faculty mentors from the Transforming Education Through the Arts Curriculum have even developed guidelines for these kinds of practices:

“The first step in developing an integrated curriculum is to identify a big idea,” the mentors write. “The big idea needs to be broad enough to enable many subject areas to participate in its exploration. In developing the big ideas into meaningful curricula content, teachers need to discuss the concepts and skills that they think are important and relevant for students to learn. Ideally, this should be done in conjunction with students.”

In Wisconsin, teachers from at least four school districts are experimenting with teaching subjects like math, science and social studies through art, dance, music and drama. The goal of the programme–which was formed out of a partnership between the University of Wisconsin-Oshkosh, Paine Art Center, and Gardens and the Chilton Public School District– is to provide educators in their second to fifth year with an arts-integrated approach to teaching, using a theme of storytelling.

Reporting for Oshkosh Northwestern Media, Noell Dickmann wrote: “On Monday teachers used interpretive dance to demonstrate science concepts in one workshop, and in another they partnered to write and illustrate a story, chuckling as the plots changed with every pass of the paper. After the exercise, they bounced ideas around as to how one can use the activity to teach English concepts, music composition and even social skills.”

There’s plenty of scientific evidence to justify these exercises.

“So much of the brain research… says that the more we incorporate things like movement and drawing and painting and music and emotions, the better children learn and the better they retain what they learn,” said Wendy Strauch-Nelson, ArtsCore coordinator.

Lou Chicquette, ArtsCore leadership team member and academic staff with UWO Department of Special and Early Childhood Education, says the strategies can apply to any level learner, which the teachers demonstrated in their workshops, and hopes it will “open up a range of possibilities for his students at UWO, who will go on to become teachers after they graduate.”

Adult learners can benefit from arts integration, too.

“Woven through these approaches we found that the development of a more sophisticated epistemology and a critical social perspective were common outcomes of art-based work in professional education,” the researchers write. “Arts-based approaches may help learners to make a critical assessment of their own roles and identities within professions, and to consider the impact of professions in shaping the broader society.”

Now that we know a little about how arts education can benefit students in general, let’s take a look at its impact on more specific disciplines.

Perks Across the Disciplines

At Cashman Elementary School in Amesbury, Massachusetts, Elizabeth Peterson teaches music to fourth graders–with writing mixed in. Peterson might ask her students to listen to “Sabre Dance” by Aram Khachaturian several times, often during snacks or at another transition time. Then they talk about the dynamics of the music, its tempo and instrumentation. Then students draw cartoons illustrating a story they’ve developed based on their interpretation of the music. Peterson asks students to develop a setting, plot and storyline, ultimately having them write out their story.

“Arts integration seems to be the best form of differentiation out there because it taps into so many different interests and abilities and forms of learning,” Peterson said. “When kids are learning through the arts, they end up getting a deeper understanding and the concepts end up sticking much better.”

In Annapolis, Maryland, 8th grade students at Wiley H. Bates Middle School learn about Mexican mosaics and math at the same time. The students study traditional turquoise mosaics and create their own versions with bits of paper. Their peers then collect sample sizes and use them to predict the number of tiles used in the artwork.

Studying and observing the art first, without the fear of getting something wrong, encourages confidence and risk-taking, says Laura Brino, the art integration specialist at Bates Middle School, in an interview for U.S. News.

Barbara Pearl, a professor of mathematics at Stockton University, uses origami to teach math. When she first started teaching more than 35 years ago, she looked for ways to make math seem fun to her middle-school students. She discovered origami, and she’s been using the art as a math teaching tool ever since.

“With middle-school-aged kids, most had math anxiety and I was intent on changing that,” she said. “I discovered a way when I took my son to a workshop in Manhattan. The moment my hands touched paper, I saw all these connections – angles, fractions, geometry, spatial, visual connections.”

It wasn’t long before Pearl published “Math in Motion: Origami in the Classroom.” The book suggests ways to teach math through the art of paper folding and is designed for students from kindergarten through eighth grade.

One year, fifth graders at IAA came up with dramatic renditions of the Revolutionary War. They used the facts in their social studies curriculum to build scripts and then discussed the dramatic connections through volume, tone of voice, and perspective.

The visual arts can be an effective medium for teaching history, too.

“When students have the opportunity to study artworks from the past, they begin to understand how art reflects the values of society and how the arts have been influenced by social, political, and economic beliefs of a society,” writes social sciences educator Marjorie Coheen Manifold. “An art object reflects the historic time and cultural context of its origin. Indeed, much of what is known or surmised of ancient cultures comes from art and architectural evidence. Artworks may record how people, places, and things looked. Materials and production techniques of past eras may give indications of geographic environment and societal structure. Knowledge of both art and the social studies may be developed sequentially and cumulatively.”

Results from a 2013 study published in Literacy found that graphic novels support metacognitive strategies for reading and writing. Researchers further examined the connection between graphic novels and reading comprehension strategies and found that children appeared to have a better understanding of the storylines when reading graphic novels, and seemed more enthusiastic about learning. One explanation for this, identified by the researchers, is that students used a unique strategy while reading graphic novels: connecting letter style and format with the emotional element of the story, analysing information about the characters derived from facial and bodily expressions, and recognising time change throughout the story because of the visual information that accompanied the text, even though it was not explicitly stated. The combination of elements in graphic novels helped children deduce what was happening throughout the story.

Results from the Adolescent Motivation to Read Profile (AMRP) revealed significant improvement in students’ value of reading and moderate improvement in their self-concept as a reader. Participants’ responses to graphic novels indicated that reading graphic novels improved their reading engagement and had a positive effect on their reading motivation.

Arts integration can help teachers out, too. IAA has two teacher retreats a year where teachers create art and try out lessons together. It’s a time for community-building and collaboration.

“You can’t just tell people to collaborate,” says Riley. “You have to put the structures and skill-building in place.”

It also provides a space for teachers to stretch themselves as artists.

Elizabeth Peterson often feels out of her element while teaching visual arts, but she appreciates its importance and isn’t afraid to grow. “I’m not a very good illustrator, but if you bring it into your [course], some of your students might be,” she says.”Having an atmosphere of being open to various art forms is all your students need.”

Learning itself is an art, and we should treat it with the same seriousness as the subjects about which we are learning. This means thinking about and discussing the learning process, from learning styles to memorisation technqiues to long-term retention strategies.

According to Josh Waitzkin, author of The Art of Learning: An Inner Journey to Optimal Performance, an unfortunate reality in chess and martial arts–and perhaps by extension in education–is that people learn many superficial and sometimes impressive tricks and techniques without developing a subtle, nuanced command of the fundamental principles.

“Tricks and traps can impress (or vanquish) the credulous, but they are of limited usefulness against someone who really knows what he or she is doing,” he says. “Strategies that rely on quick checkmates are likely to falter against players who can deflect attacks and get one into a long middle-game. Smashing inferior players with four-move checkmates is superficially satisfying, but it does little to better one’s game.”

In other words, learn deeply or not at all.