How to Teach Students About Gender Equality 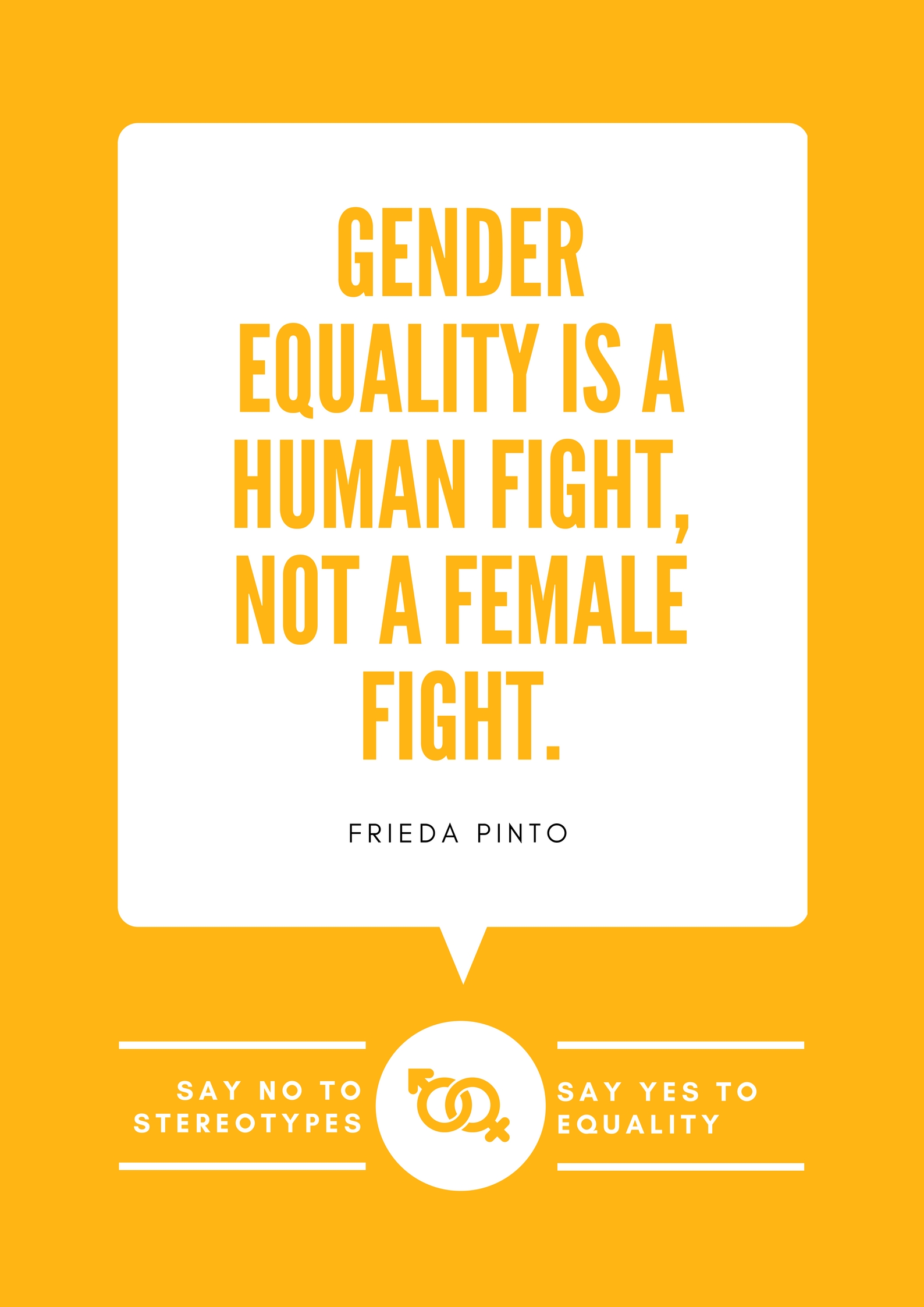 How do we create a world free from gender-based discrimination? Start by raising children who respect one another as individuals and question the traditional roles they’re assigned as boys or girls. Educators are uniquely positioned to show students they have a choice when it comes to forming their own identity, and to highlight the many illusions and traps society has laid before them that prevent equal opportunity in their personal and professional lives. It’s time to give gender equality the place it deserves in our curricula, from the fine arts to the hard sciences and from kindergarten to secondary school and beyond.

There’s no question that gender equality improves the well being of individuals, communities, cultures, and nations worldwide. According to the 2017 World Economic Forum’s Global Gender Gap Report, economies around the world need gender parity to thrive:

“Across all countries, making full use of women’s capabilities paves the way to optimizing a nation’s human capital potential… Top performers in the Global Human Capital Index have succeeded in maximizing the development and deployment of their nation’s talent by also narrowing their gender gaps.”

While the report focuses mostly on women’s educational and economic empowerment, it also recognizes that “gender diversity” may be the fundamental issue at hand:

“The global economy is currently in transition to a Fourth Industrial Revolution. In such a highly interconnected and rapidly changing world, diversity is critical to informed corporate decision-making and business innovation.”

The meaning between the lines, so to speak, is that the future of human potential depends not only on women’s advancement but on a willingness to re-consider what it means to be male or female, masculine or feminine, both, or neither. In other words, it’s not just a female issue; it’s a human issue.

Navigating that issue begins with a good education.

Below we’ve outlined ten ways you can promote gender equality in your school. Please help us enrich this post by adding insights from your own experience in the comments section at the end.

If we teach students that “boys can be sensitive” and “girls can be dominant,” we are still presenting sensitivity as a feminine trait and dominance as a masculine trait. We need to disassociate these terms from gender and teach students to judge a person—female, male, nonbinary—as an individual with a complex makeup of characteristics.

Many of us are much harsher on boys than on girls when it comes to behavioral issues, but this fuels destructive cultural phenomena like toxic masculinity. When boys are constantly targeted in this way, they internalize their shame as anger, which often leads to further behavioral issues down the road.

“Teachers were also surprised by what our research revealed about their behaviour towards boys in the classroom. For example, boys said that teachers had a no-tolerance attitude to their ‘bad’ behaviour, while when the girls acted in the same way the teachers did not react at all. The boys felt that they picked up the labels of being ‘naughty’ and ‘useless’ quickly and easily, making them feeling side-lined and neglected. We need to focus on boys just as much as girls, and make sure that no one feels left out or favoured.”

Let’s also take care not to center discussions of gender equality around girls only. It affects boys as well, and they need to become aware of this not only to help themselves but to empathize with and help girls as well.

Teach students to become aware of the way females and males occupy space differently. For instance, a male student might share what it’s like to feel pressure to “show off” his physical strength, while a female student might share what it’s like to feel like she needs to hide her body in order to avoid unwanted attention. How can females make males feel more secure about their bodies (e.g. letting them know that respect for women is more important than being “built”), and how can males make females feel more secure about theirs (e.g. helping women shut down unwanted attention as effectively as possible)?

Teach them about the most important physical agent of change, the voice, as well. A voice can perpetuate or reduce gender bias, depending on how it’s used. Hold discussions on what happens when men raise their voices above women’s, when women raise their voices above men’s, when discrimination occurs but no one speaks up, and how we can use our voices in different ways to navigate tough situations.

Students may look around and think, “I don’t see any gender bias here.” But that’s probably because most of us have only been educated on how hostile sexism works, and hostile sexism isn’t the kind of sexism that most people experience day-to-day. Another form of gender bias, benevolent sexism, is more frequently at play. Benevolent sexism is sexism that works by “buttering up” its victim, thereby coercing the victim into his or her own oppression. Oftentimes its perpetrators aren’t even aware they’re doing it. When a female student runs for a leadership position in student council but is told she would make an excellent secretary because “none of the boys can do the job right,” that’s benevolent sexism. It’s reinforcing unwanted gender roles by spinning them in a positive light. Let’s teach students to recognize and deal with situations like these.

Gender bias in textbooks and other instructional materials is a real problem. Several UNSECO studies found that many of these texts “underrepresent women, contain stereotypes about women, or offensive comments about women.” Research also suggests that characterizations in teaching materials often “show a male majority.” One study on high school English language textbooks in Iran found that male characterizations were used as much as 80% of the time. Alternatively, gender bias in instructional materials can lead to narrow definitions of men’s roles as well–for example, if textbook images only show women as teachers and nurses.

Use this handy UNESCO checklist in planning your curriculum:

6. Emphasize the power of language.

Teach students to recognize gender bias in language when they hear or see it. For example, why do we hear, internalize, and accept the refrain “Be a man” so unquestioningly? So much is packed in those three simple words, from ideas of how men are expected to shape their self-worth around traditional notions of masculinity to the noticeable absence of the phrase “Be a woman.” Hold as many discussions as possible about the way gender bias has wormed its way into our everyday language, and how continued use of these phrases perpetuates the bias that inspired them in the first place.

So many of us—children and adults alike—don’t speak up for fear of social rejection. Especially when students are young, around middle and high school age, it’s highly important to convey the value in “standing up for what’s right even if you stand alone.” Be clear about the fact that students may not be rewarded with popularity and social acceptance for doing what’s right, but that anyone who does reject them for trying to make the world a more equitable, peaceful place isn’t worth their heartache anyway.

Helping students recognize instances of gender bias is one thing; helping them confront it is another. Students need the vocabulary to deal with what will often be uncomfortable situations, and we can play a part in giving it to them.

Let’s help them develop a vocabulary not only for standing up for themselves but for others as well.

We can’t talk about gender equality without talking about race, class, sexual orientation, and other intersectional issues. Understand that not every male or female student’s experience of gender bias is the same. Provide a safe space for talking about each student’s unique experience, whether that means opening up class discussions or letting students know you are there for them after class or during office hours.

10. Be sensitive to cultural differences.

“Teaching students about this topic is not the same as implying that students must adopt all or most American [or Australian] norms, abandon home cultures, or that their personal or cultural beliefs are inferior,” writes education policy researcher Joel L.A. Peterson. “Educators have a responsibility to teach students about American society, but should avoid proscriptive exhortations, suggestions, or denigration of minority or differing cultural, religious, or social beliefs which may be held by minority and immigrant families.”

It’s time to talk about gender out in the open, the way we talk about all other subjects. And the earlier, the better. Studies show that parents begin treating their daughters or sons differently as soon as they are born, comforting crying girls more than crying boys and praising toddlers for either playing with building blocks or dolls depending on their gender. The behavioral scripts run deep because they are assigned to us as soon as we enter this world. Let’s give boys and girls a chance to decide who they want to be as humans.