How to Become a Zookeeper - Career Salaries, Job Stats & Education

How to Become a Zookeeper - Career Salaries, Job Stats & Education

** Open Colleges does not currently offer any Zookeeping course**

/ How to Become a Zookeeper - Career Salaries, Job Stats & Education

Looking at a Zookeeping Career?

Become empowered and motivated by building on your current knowledge, or step into a certificate course that gives you the confidence to take your career to the next level.

The graph shows historical and projected (to 2019) employment levels (thousands) for this occupation.

Over the next few years, the number of job openings for Zookeepers is expected to be below average (between 5,001 and 10,000). Job openings count both employment growth and turnover (defined as workers leaving their occupation for other employment or leaving the workforce).

Employment for Zookeepers to November 2019 has remained relatively stable. Employment in this moderate sized occupation (12,000 in November 2014) rose slightly in the past five years and in the long-term (ten years).

Source: *Job Outlook Government website. ABS EEBTUM survey August 2014 cat. no. 6310.0. Estimates have been rounded and consequently some discrepancies may occur between sums of the component items and totals.

Note: These figures are indicative and cannot be used to determine a particular wage rate.

Payscale.com lists the wage for a Zookeepers (in Sydney with 5 years’ experience) as being between an average of $62 000 per annum and $73 000 at the highest end of the market.

Please note: For roles in animal care, rates of pay will vary depending on the type of business and the type of environment.

The graph shows the average weekly hours (by gender and full-time and part-time) worked for this occupation, compared with all occupations.

Zookeepers have a comparatively low proportion of full-time jobs (55.9 per cent). For Zookeepers working full-time, average weekly hours are 43.7 (compared to 40.9 for all occupations) and earnings are high - in the third decile. Unemployment for Zookeepers is above average.

As expected, the Zookeeping industry has a strong appeal to young to middle-aged people, making it a dynamic and vibrant work environment.

Interview with a professional from the Zookeeping Industry 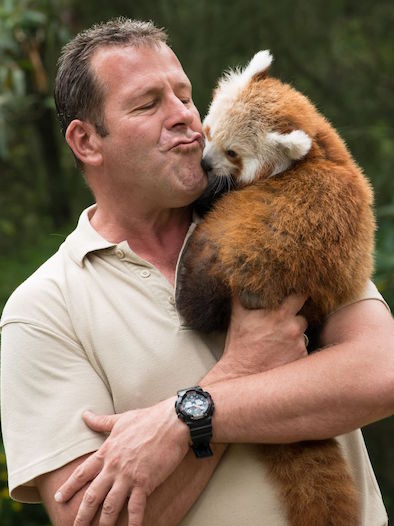 What does a Zookeepers do on a day to day basis?

“I’m usually here from six o’clock in the morning until about six o’clock at night,” he says. “That’s in a managerial role, though, so the keepers will generally get in before seven o’clock in the morning. It really is quite an evolved job these days,” he says. “It’s no longer just picking up poo and throwing chunks of meat on animals. These days, there’s far more emphasis on enrichments and encouraging natural behaviours. So we do a lot of training to help animals display natural behaviours and we also do keeper talks and animal interactions so that we can actually teach people about what’s going on.”

What are the best parts of the job?

“I love the fact that no day is ever the same,” says Paul. “It’s been 27 years and I still can’t tell you exactly what my day is going to be like. It’s always challenging, but seeing the difference you can make in each animal’s individual life and also being able to help the species in some way is very rewarding. We all have our preferences when it comes to the animals we work with, but I enjoy working with all of them and they each come with a different set of challenges. At the moment my favourite animal is our female tiger Seraya. She’s a true carnivore so she only eats meat. We feed her a combination of chicken, beef, deer, horse and rabbit meat.”

What are some of the most challenging aspects of Zookeeping?

“It doesn’t matter whether it’s 42 degrees or minus five and pouring with rain. You still have toget in there and get it done, so it can be very physically challenging,” says Paul. “You have to be very driven and passionate about it as it’s not a highly paid profession. We do it because of our love of the animals and enjoyment of the job. You have to be flexible and accept that it’s not a nine-to-five job; you’re going get to work early and leave late, but you’ll also enjoy every minute of it.”

Thanks, Paul, for sharing your story with Open Colleges.

Open Colleges does offer a nationally accredited course ACM20117 Certificate II in Animal Studies which is ideal to build your knowledge on animal care and also to gain the skills required to  work in a pet store, shelter, kennel or cattery.