STEM Still a Man’s World? Not at Harvey Mudd College

By Marianne Stenger May 2nd, 2013 No Comments Other 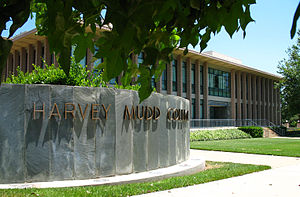 Despite the fact that more women attend and graduate from college than men, they remain highly underrepresented in the science, technology, engineering and mathematics field.

A 2011 report by the U.S. Commerce Department’s Economics and Statistics Administration (ESA) found that although women make up 48% of the U.S. workforce, they hold only around 24% of STEM jobs.

In the UK, women make up only 15% of engineering and technology students, and figures from the Higher Education Statistics Agency show that women are increasingly choosing subjects that are often viewed as more “feminine,” such as education, creative arts and nursing.

The ESA report shows that even when women do choose STEM degrees, only about 26% actually end up working in this industry, whereas for men, that number is 40%.

So why are so few women choosing these fields of study, and even fewer going on to work in these fields?

Rebecca Blank, Acting Secretary at the United States Department of Commerce, believes that this may have something to do with the fact that STEM jobs tend not to be very family-friendly, which means that women interested in pursuing a career in this industry often have to choose between work and family.

Another problem may lie in the lack of female role models in STEM. The majority of school teachers are female, and very few come from a science-related background. Career advisors often lack sufficient insight into the reality of STEM professions, and fail to encourage women to choose these subjects.

At Harvey Mudd College, however, about 25% of students are computer science majors and between 40-45% of those majors are women, a gender ratio that is triple the U.S.  national average of 12-14%.

Ran Libeskind-Hadas, chairman of the computer science department at Harvey Mudd, agrees that on the whole, women have not received enough encouragement to enter computing and IT fields.

“In many subtle and not-so-subtle ways, women have not been encouraged – and probably even discouraged – from entering computing and IT fields,” he says.

I believe that part of the issue is that those fields have built a metaphorical perimeter fence with many unfriendly signs on it. Some of those signs suggest that if you haven’t been tinkering with computers from an early age, you’re too far behind to get involved.

Others indicate that the culture is male-dominated.  Others state that the work is done in dark cubicles with little social contact.  It’s not a very appealing set of messages.”

So what is Harvey Mudd College doing differently to attract so many women to STEM fields?

Hadas explains that HMC has developed and implemented a novel introductory course that every first-year student now takes in their first semester. The course is designed to introduce computer science as an intellectually stimulating discipline with many opportunities for creativity.

Students are given the opportunity to write their own programs each week; programs that they actually want to use themselves and that they can show to their friends and family.

Hadas believes that this method encourages a great deal of personal creativity and exploration.  Aside from programming, the introductory course also exposes students to computer science principles.

This helps to dismiss the notion that computer science is all about programming and shows students that it also has intellectual depth and connections to other disciplines.

“[We] work hard to engage young women in research as early as the summer after their first year.  These research experiences give students an opportunity to contribute to the state-of-the-art and to forge strong relationships with their peers and faculty mentors,” says Hadas.

“We’re also taking a large number of our first-year women students to the Grace Hopper Celebration of Women in Computing Conference.”

The annual Grace Hopper conference is named after a pioneering programmer, and gives freshmen the opportunity to meet female role models; an experience that often inspires female students who are looking to enter this largely male dominated industry.

HMC seems to be right on track with its approach, as experts on the gender gap in computer science point out that a multipronged strategy is necessary to close the gap. Some of these strategies include:

Although many learning institutions are now working towards closing the gap both in computer science and in other areas of the STEM industry, experts believe that in order to successfully tackle the issue of gender inequality on a large scale, learning institutions must connect and come together in their efforts.