How Interdisciplinary Thinking Can Help You Learn More 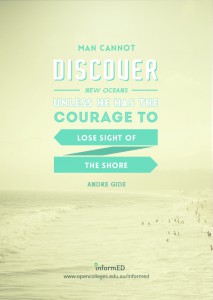 Interdisciplinary thinking isn’t just some educational buzzword; it’s a valuable perspective defined by the ability to draw insights from multiple disciplines and apply them to your own area of focus in a way that challenges traditional notions and enriches the conversation around it. It draws bridges between the sciences and the arts, and removes barriers between disciplines that might otherwise inform and enhance one another. In a professional climate that celebrates innovation, open-mindedness, and creativity, interdisciplinary thinking is becoming a highly necessary and frequently sought-out skill. It’s time to give it the place it deserves in the classroom.

Let’s take a closer look at why it’s time to prioritise it, as well as how experts are currently defining and using it, below.

Why Is Interdisciplinary Thinking Important?

In 2008, Fran Simmons, an English teacher at New Dorp High School in New York—at that time one of the lowest-performing secondary institutions in the nation—devised a simple test for her students in an effort to keep district officials from pulling the plug. First, she asked her freshman class to read Of Mice and Men. Then, using information from the novel, she asked them to answer the following prompt in a single sentence:

She was looking for a sentence like the following: “Although George worked very hard, he could not attain the American Dream.”

Some students wrote passable sentences, but many could not manage to finish the line. More than a few wrote the following:

“Although George and Lenny were friends.”

At this point, Simmons said in an interview with Peg Tyre of Atlantic Monthly, a light bulb went on in her head: these 14-and-15-year-olds didn’t know how to use some basic parts of speech. With such grammatical gaps, it was a wonder they learned as much as they did. “Yes, they could read simple sentences,” but works like the Gettysburg Address were beyond them, and not because they were too lazy to look up words they didn’t know—because “they were missing a crucial understanding of how language works. They didn’t understand that the key information in a sentence doesn’t always come at the beginning of that sentence.”

The solution New Dorp instructors came up with was to foster interdisciplinary thinking.

By fall 2009, nearly every instructional hour except for math class was dedicated to teaching essay writing along with a particular subject. So in chemistry class in the winter of 2010, those same students who wrote “Although George and Lenny were friends” were required to complete worksheets describing the properties of hydrogen and oxygen with subordinating clauses like “although”:

“Although hydrogen is explosive and oxygen supports combustion,” one student wrote, “a compound of them puts out fires.”

“Unless hydrogen and oxygen form a compound, they are explosive and dangerous,” wrote another.

“If hydrogen and oxygen form a compound, they lose their original properties of being explosive and supporting combustion.”

Once students began understanding the mechanics of the English language, they began understanding the language of chemistry, social studies, history, physics. By the time they were sophomores, the students who had begun receiving interdisciplinary writing instruction as freshmen were already scoring higher on exams than any previous New Dorp class. Pass rates for the English Regents, for example, bounced from 67 percent in June 2009 to 89 percent in 2011; for the global-­history exam, pass rates rose from 64 to 75 percent. The number of kids enrolling in college-prep courses shot up from 148 students in 2006 to 412 students in 2012. The graduation rate quickly rose to 80 percent, a staggering improvement over the 63 percent figure that prevailed before the new instruction began.

The New Dorp story is just one example of how powerful interdisciplinary thinking (and teaching) can be. And it’s not new. Educators and researchers have been singing its praises for decades. It’s time to listen up and see if we can’t use their findings to help more students fulfill their educational potential.

Allen Repko (2009), Director of the Interdisciplinary Studies Program for the School of Urban and Public Affairs at the University of Texas at Arlington, has identified four cognitive abilities that illustrate some of the benefits of interdisciplinary thinking:

“This refers to the capacity to understand multiple viewpoints on a given topic, including an appreciation of the differences between disciplines and especially their perspectives on how to approach a problem and their rules of evidence.”

“When ideas from a variety of disciplines are embraced while investigating an issue, alternative perspectives and predictions often arise. The intellectual challenge is to find ways to account for these, which entails careful and creative thinking rather than reverting to a single disciplinary explanation.”

“This entails seeing an issue from an array of perspectives and recognising how each of the alternative approaches influences one another.”

As part of the Harvard Interdisciplinary Studies Project in Liberal Education, Veronica Boix-Mansilla recommends a few “core forms of integration”:

1. Aesthetic synthesis: Student examines a scientific, historical, social, problem in depth and distill its meaning or significance in a metaphor or work of art (e.g. historical monument).

2. Crossover tool: A particular concept, instrument, or skill (e.g. close observation, negative space drawing) is applied in a variety of disciplinary contexts (biological drawings, architecture, film) resulting in a deeper understanding of tool and context of application itself.

3. Resonance: A particular concept is explored (e.g. suffering, justice) in multiple disciplinary contexts (a work of art, a novel, a memoir) thereby extending the meaning of the concept to embrace nuances, detail, and richness in associations (often used in the humanities).

5. Pragmatic solution: A practical problem is solved (or a product developed) by the inclusion of one or more new disciplinary perspectives (e.g., technologically augmented musical instruments).

6. Embedding: Elements in one discipline are placed in broader historical social or cultural contexts (e.g., the history of Relativity).

7. Embodying: A particular example or case is seen as a microcosm of various disciplinary connections (case studies on global production).

Now that we’ve heard how interdisciplinary thinking works in theory, let’s examine how it might be applied in a real-life classroom setting.

How to Encourage Interdisciplinary Thinking

Educators at Carleton College in Minnesota have come up with a few recommendations for teachers interested in helping students (and themselves) adopt interdisciplinary thinking:

“Read introductory level material on topics to be covered from related disciplines. Talk to colleagues in related disciplines about concepts you will discuss in class to instill confidence that you have a clear understanding of the fundamental ideas.”

“Begin with a topic where basic principles from another discipline are sufficient to offer a viable interdisciplinary examination of the topic under consideration. If students are comfortable with this level of analysis, selectively introduce one or more desired additional concepts, and monitor student understanding.”

“During class conversation and in assignments ask students to identify insight they would have missed if they had engaged in a discipline specific investigation of the topic and if the gain is substantial enough to warrant an interdisciplinary examination.”

“Incorporate insights from other disciplines that you believe are well suited to enrich student understanding of the topic so that students clearly see that the instructor believes this form of integration is valuable.”

“Make a conscious effort to present insights from each discipline in a non-hierarchical manner, with the likely exception of choosing one discipline (usually that of the instructor) as the base from which to begin the analysis.”

6. Promote the synthesis of ideas

“After modeling interdisciplinary thinking for students, especially how to synthesize and integrate insights from multiple disciplines, it is essential that the instructor ask the students to attempt this activity when new problems are addressed.”

7. Do not intervene too quickly

“Let the students grapple with how to integrate and offer a range of ideas and approaches to reach this end. Consider adopting small group activities to allow students to engage in cooperative learning to become more proficient in integrating insights from a host of disciplines.”

Ask students questions that “require them to broach synthesis and integration. Moreover, ask them to identify areas of conflict and cohesion across disciplines. Do not be afraid to follow reasonable pathways, if they turn out to be barren that is part of the way in which students will learn how to integrate.”

“Begin with the notions that each discipline in isolation would offer. Then identify the potential gains from synthesis and integration, and clarify the options on the table to foster integration.”

10. Have students work in groups.

“Collaborative forms of learning can be used to promote development of interdisciplinary analysis skills, such as breaking into groups in class to work on ways to approach issues of concern in an interdisciplinary fashion. Student groups can bring their work back to the larger group for refinement.”

In addition to these 10 tips, the team at Carleton advises that instructors “start with a topic in which you are already highly knowledgeable about how other disciplines address the issue and have a clear sense of how to synthesise and integrate. This will build your confidence and allow you to more effectively gauge how students respond.” Be sure, as well, to “allocate sufficient time for interdisciplinary investigations if the methodology is being used for a portion of the class. Be flexible or prepared to cover more or less material in a discipline specific manner based on how the interdisciplinary exercise progresses.”

Feeling ready to start integrating? Check out the following studies for a bit more inspiration: