What’s in a Genius? How Popular Notions of Intelligence Are Holding Us Back 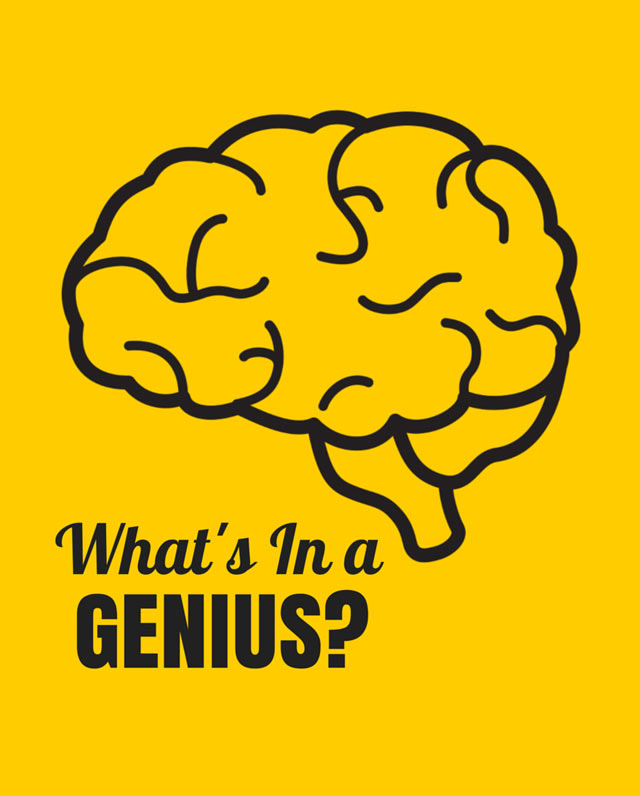 The word “genius” has come to dictate the way we think about intelligence, and not always in the most accurate of ways. Traditional notions of the concept date back to Plato’s understanding of artistic creation, and define it as a state of being rather than a type of person: “God takes away the minds of these men,” he said of poets, presuming that they must be in the “grip of something divine” while composing.

We now think of “a genius” as an exceptional individual whose talent arises from inherited skills or random genetic distribution. But this has only been the case since the 18th century, when influential figures like Shakespeare and Benjamin Franklin began being labeled as such. Because of our modern definition of “genius,” Newton was buried beside saints in Westminster Abbey, Haydn and Goya’s skulls were removed and studied to search for signs of greatness, and Einstein’s eyeballs were locked in a safe-deposit box that still exists today.

Why is this a problem? Because it misrepresents the nature of human intelligence.

We now have exclusive clubs for people with high IQs, as if the way a person thinks can become as much a part of their identity as playing tennis or singing in a choir. At Mensa, an exclusive international society open only to people who score at or above the 98th percentile on an IQ or other standardised intelligence test, members find it misleading to call themselves “geniuses.”

“Genius has gone from ‘having a [kind of] genius’ to ‘being’ one,” says Mensa member and clinical hypnotist John Sheehan. “I think the word genius now comes from the popular press. It’s easy to say, it’s got a catch to it. But among the people whose careers are invested in giftedness and high intelligence, the word ‘genius’ is not often used.”

Another Mensa member said that being labeld a genius was good reassurance more than anything else. “Now if I come across something that’s challenging, I think maybe I am not really that smart, and then I can say no, actually I am. It gives belief in that ability.”

But therein lies the problem: If you aren’t labeled a genius, that belief can slip out from beneath your feet.

In their book, The Straight-A Conspiracy, Hunter Maats and Katie O’Brien use the latest research in psychology and neuroscience to demonstrate how “genius” is more accessible to us than we are led to believe.

In one section, Maats explains how students he tutored would watch another student cruise through an assignment and assume they were just naturally good at it, that they didn’t even have to try. But here’s the real real reason they worked so fast: the student knew the answer right away because “it had become automatic,” he said. “They looked effortless, but they only became effortless through hard work.” Unlike sports or music, where students can see others practising, a lot of course work happens at home, builds slowly over time, and goes unseen. “You don’t see the work others are doing, so it looks like it never happened.”

Clearly there is more to intelligence than practice, but it’s inaccurate to chalk it up to some sort of mystical intellectual prowess. Doing so can be damaging to society, and modern-day geniuses themselves tend to agree.

More Than IQ, Less Than Perfection

Dr. Jordan Ellenberg, professor of mathematics at the University of Wisconsin, Madison, was a child “genius,” receiving a perfect score on the math portion of the SAT at the age of 12. Now a maths teacher, he says the notion of genius is keeping some students from trying.

“One of the most painful aspects of teaching mathematics is seeing my students damaged by the cult of the genius. That cult tells students that it’s not worth doing math unless you’re the best at math because those special few are the only ones whose contributions really count.”

And the notion of an all-around, polymath-like genius whose every mental faculty is charged with brilliance can be equally damaging. It means undervaluing hard work, creativity, perspective, and taste–without which, Ellenberg says, we end up wasting our skills on pointless projects. As Terry Tao, UCLA professor and winner of the Fields Medal, once wrote: “I find the reality of mathematical research today–in which progress is obtained naturally and cumulatively as a consequence of hard work, directed by intuition, literature, and a bit of luck–to be far more satisfying than the romantic image that I had as a student of mathematics being advanced primarily by the mystic inspirations of some rare breed of ‘geniuses.'”

In October, online publication Nautilus spoke with members of Mensa to see what today’s “geniuses” really think about their own intelligence. Along with Sheehan, they interviewed Richard Hunter, a retired finance director at a drinks distributor; journalist Jack Williams; Bikram Rana, a director at a business consulting firm; and LaRae Bakerink, a business consultant.

None of these people felt comfortable calling themselves geniuses, let alone defining genius in such romantic terms.

When asked whether he considered himself a genius, Bakerink replied, “I consider myself smarter than the average bear. I don’t look at myself as a genius. I think that’s because I see things other people have done, things they have created, discovered, or invented, and I look at those people in awe, because that’s not a capability I have. I have a really good memory and really excellent organisational ability, but I don’t consider those things genius.”

Hunter agrees: “Genius takes many forms. An example would be Dave Johnson. He was a famous decathlete in the 80s and 90s. He was clearly a genius athlete: He ran, he could throw javelin, he could do all these things, and he won the Olympic gold decathlon. That must be genius in the sporting field. I am nothing like Dave Johnson–it is far more complicated than one thing or another.”

Significantly, most Mensa members agreed that genius has less to do with IQ and more to do with creativity.
“It is what you do with your life that defines whether you are a genius,” says Bakerink. “A genius is someone who can create something new.”

Hence, our tendency to label inventors and poets as such. And in that sense, no one can “be” a genius. Genius is a thing that happens, not a kind of person.

Modern education should reflect that.

Bringing Down the Genius

How we think about learning makes a difference in what we’re able to achieve.

In groundbreaking research on the subject, Stanford psychologist Carol Dweck found that when students take on a growth mindset–one in which they believe that the brain is malleable, and they can improve at a task with effort–they handle setbacks better and improve academically.

A growth mindset is the idea that, whatever level of talent you have, you can always develop further through hard work, good strategies, and mentorship from others. In a growth mindset, the main goal is to get smarter, to challenge your brain, make those new connections, and grow your abilities over time. And when you think that way, Dweck reveals, it’s not as crucial to look smart or smarter than other people at every given moment.
On the flip side of that is the fixed mindset, or what Dweck has nicknamed the “culture of genius.” It’s the belief that your basic talents, abilities, and intelligence are fixed traits. You have a certain amount, and that’s that.

Having to work hard at something means you’re just not as smart as other people.

“When kids are praised for their talent, their brilliance, it fosters more of a fixed mindset, which is ironic because the self-esteem movement told us that was going to make our kids confident and successful,” says Dweck. “And when kids struggle, it creates a fear of challenge, a fear of failure. We show in our research that kids lie about their poor performance if you have praised them for their intelligence.”

It’s a hard mindset to break out of, Dweck says, but it’s entirely worth the effort.

“I worked with a group in a very big, successful Silicon Valley company that had more of a culture of genius, a fixed mindset culture, and within that group they started talking more about struggle. They made struggle into something you were proud of, not something that meant they were not up to snuff.”

As educators, it’s our job to bust the genius myth once and for all, and to help cultivate a growth mindset in students who would otherwise throw their hands up in defeat.

The most dramatic support for Dweck’s theory comes from a recent study of low-achieving seventh graders. All students participated in sessions on study skills, the brain and the like; in addition, one group attended a neutral session on memory while the other learned that intelligence, like a muscle, grows stronger through exercise. Training students to adopt a growth mind-set about intelligence had a catalytic effect on motivation and math grades. Students in the control group showed no improvement despite all the other interventions.

“Study skills and learning skills are inert until they’re powered by an active ingredient,” Dweck explains. “Students may know how to study, but won’t want to if they believe their efforts are futile. If you target that belief, you can see more benefit than you have any reason to hope for.”

We must convince our students that intelligence does not mean proceeding without effort. Maat and O’Brien think that doing so can be as simple as familiarising yourself with the latest findings in cognitive science and sharing them with your students.

One example they give in their book is student multitasking, one of the largest myths in the genius debate.

“The idea that your attention can multitask is a major myth. When you’re trying to do all four of these tasks– walking, chewing gum, talking to your friend and reading Huckleberry Finn–the first two won’t be affected, because you’ve automated them. You can keep walking and chewing gum without even noticing they’re happening. But each of the new activities–holding a new conversation and reading a new book–requires your full attention in order to go well.”
You can’t focus on two things you don’t know, they explain, and neither could Einstein. It’s a matter of working at a task over time, until it becomes second nature.

Through their work, Maats and O’Brien hope to dispel the image of the rumpled genius, brilliant in spite of himself, in a way that speaks directly to students. They want students to know that there are proven techniques that can improve their academic performance and engage parents and teachers.

“We are placed into learning settings with no manual on how to use our brains,” say Maat and O’Brien. “We need to know not what to learn but how to learn.”

The research is there. Now it’s time to take the genius down from his lofty throne and have a little faith in ourselves.