Traditional Subjects: Can We Do Without Them? 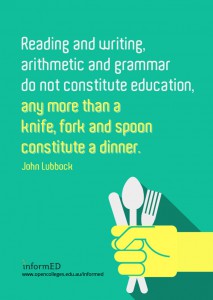 Burning question of the day: Why the continued acceptance of traditional academic subjects?

New research from the University of Derby has revealed that, despite shifting demands in the job market, parents across England are still urging their children to pursue degrees in areas like Science, Maths, English, and History.

The research surveyed 2,000 parents with children under 18 and found that 41% would prefer their children to choose a university based on its employability rates, and that traditional subjects “remain firm favourites among parents.” But therein lies a risky assumption: employability rates and traditional degrees no longer go hand-in-hand.

Results from the latest Destination of Leavers from Higher Education (DLHE) survey shows that degrees in alternative areas such as Child and Youth Studies, Events Management, and Media Studies led 100% of graduates into jobs or further study just six months after graduation.

“I see parents who are worried when their children want to study subjects such as pop music or music technology,” Gareth Hughes, Psychotherapist and Researcher at the University of Derby. “Today’s universities are trying to meet employers’ needs through innovative courses but they are also preparing young people for jobs in the future that we cannot foresee. A degree isn’t a job training programme. If you engage with it, then a degree in any subject will give you the same set of skills and build you up as a person.”

Many traditional subjects don’t leave graduates “work-ready,” or able to step into a role with a solid understanding of how a business operates and what they can contribute, which is what employers want. But being “work-ready” in this sense doesn’t exactly mean honing a very specific skill set to pursue a trade like welding or plumbing. It means choosing a degree that’s practice-oriented but still general enough to accommodate new trends in technology and fluctuations in the economy.

“The idea of a job for life is one that’s very rare, and we are now seeing people having many different careers between graduation and retirement,” says June Hughes, Registrar and Secretary at the University of Derby. “That’s not to say that the more traditional subjects are dead—far from it. We have many students who go on to great careers working in the Law, for example. It’s just that the opportunities are so more varied now that it’s important not to disregard anything.”

If traditional subjects are no longer holding up to industry demands, and industry demands are in constant flux, what does this mean in a classroom setting? What should we be teaching students to prepare them for the real world as it exists today, tomorrow, and ten years from now?

Charles Fadel, founder of the Center for Curriculum Redesign and a visiting practitioner at Harvard’s Graduate School of Education, says it’s time for schools to keep pace with revolutions in society and technology: “With constant and dramatic changes affecting our lives, the school curriculum needs to be re-thought if it is to be relevant.”

One way to encourage change is to take a long, hard look at the subjects we’ve been teaching for over a century.

“Traditional disciplines currently take up most of the available time and leave little space for newer subjects, branches, and topics,” Fadel says. “We need to redesign curriculum to both broaden and deepen understanding; the current content will need to be re-examined with a fine-toothed comb. That process involves distilling each discipline into its core essential questions, and restructuring the information to highlight these concepts and meta-concepts as well as their processes, methods, and tools.”

Fadel is careful to point out that “redesigning” does not mean eliminating subjects altogether.

“The question is not whether students need to learn math, but which parts of math are no longer useful? For example, perhaps it is no longer useful to spend core curriculum time learning long division, or some algorithms of trigonometry.”

Still, this kind of reassessment could result in a new way of framing the overarching subjects themselves.

In Finland, for example, instructors are trading in teaching by subject (e.g. an hour of history followed by an hour of geometry) in favour of “phenomenon teaching,” or teaching by topic. It’s a more interdisciplinary approach, whereby students learn how to apply elements of multiple subjects to a specific area of interest. Teaching a course on the European Union, for instance, would involve merging elements of economics, history (of the countries involved), languages, and geography. A vocational course like “cafeteria services” would include elements of maths, languages (to help serve foreign customers), writing skills, and communication skills.

But the transition doesn’t have to be so sudden. Finland has been promoting this kind of thinking for a while. When learning English, for example, it’s not uncommon for students to spend the class period investigating weather conditions in different countries displayed on a board of Europe, thereby combining foreign language learning with climatology and geography.

“We really need a rethinking of education and a redesigning of our system, so it prepares our children for the future with the skills that are needed for today and tomorrow,” says Marjo Kyllonen, Helsinki’s education manager. “There are schools that are teaching in the old fashioned way which was of benefit in the beginnings of the 1900s—but the needs are not the same and we need something fit for the 21st century.”

How Do We Move Away From Traditional Subjects?

Teachers and administrators face several challenges in making the shift away from traditional subjects.

First, restructuring a system with centuries-old roots takes time. “Because of the vast amount of information that needs to be covered and the pressure of preparing for standardised tests, relatively few educators are able to consistently provide the time needed to effectively integrate new learning goals into the curriculum.”

More time can be allotted, but it’s a resource heavily influenced by political and economic priorities.

“At the policy level, most countries must work with an inherent level of instability, with elections and changes of leadership occurring every few years. The frequent changes…often preclude the continuity necessary to reflect on large-scale trends, plan for long-term goals, take calculated risks, or embrace change and innovation.”

Even at the level of human expertise and authority, Fadel says, decisions are often reserved for subject-matter experts. But these experts’ opinions can be skewed by tradition.

“Being loyal to their field of study, [subject experts] also find it difficult to discard parts of the whole cloth of their field’s knowledge, even after those parts have become outdated,” he warns. “It is also very difficult for experts to add new disciplines to traditional fields of knowledge. For example, algorithmics and game theory are topics that are relevant for current advancements in a variety of fields that use mathematics, but tradition-oriented mathematics experts do not include them in their efforts to reform mathematics curriculum.”

What’s more, experts “often operate in relative isolation from the demands of the real world, sometimes unaware of the ways their discipline is currently being applied in professional settings outside academia.”

Even in Finland, the “phenomenon teaching” reforms have met objections from teachers and academics, many of whom have spent their careers focusing on a particular subject only to be told to change their approach.

But it appears that change is paying off. Early data shows that in the two years since the reforms were introduced in schools across Helsinki, student outcomes have improved. And of the 70 percent of the city’s high school teachers who have been trained in adopting them (sometimes co-teaching with other subject experts), most agree that it’s been the right move.

“We have really changed the mindset,” says Pasi Silander, Helsinki’s development manager. “It is quite difficult to get teachers to start and take the first step… but teachers who have taken to the new approach say they can’t go back.”

By 2020, when the reforms are slated to have been implemented across all Finnish schools, the results could be dramatic. But what of the fate of schools in other nations?

Here’s Fadel’s take on the matter: “At the policy level, we will need to strive toward a stable consensus among political factions, and clearly articulated vision of the kind of education students now need. At the level of disciplinary experts, there needs to be continuous involvement of real-world users of the disciplines, in addition to reform-minded academics. We will need to leverage best practices from education systems around the world as well as industry where applicable.”

And at the student level, we’ll need to re-examine the relevance of what we teach, beginning with a greater awareness of what skills are needed in the real world.

The Skills Ignored By Traditional Subjects

It’s always been difficult to articulate how expertise in an abstract discipline like English or Math translates to professional skills in the real world. “Well, you could teach,” the conversation usually goes, until a position—often indirectly related or completely unrelated to your specialty—falls in your lap. Now, in 2016, even unrelated positions are hard to come by. It’s a tough market for anyone who has a four-year degree, if only because that’s quickly becoming most of us.

One way to stand out from other job candidates is to prove you have a unique skill or set of skills that can change the game for potential employers. It’s important to realise that none of those skills are going to include things like proficiency at long division or an ability to recite scenes from Othello.

The Confederation of British Industry and Labour’s Shadow Education Secretary Tristram Hunt has called for education reforms that “promote character, resilience, and communication skills rather than just pushing children through ‘exam factories.’”

“But skills are only one further dimension. In addition to skills, students will need to learn character qualities: how students engage and behave in the world. Policymakers are beginning to see their importance as part of a formal education, although educators and employers have known this for a long time.”

A big part of developing relevant skills and the kind of character he and Hunt are talking about is Meta-Learning, or learning how to learn.

“Its significance must be highlighted explicitly, so that we are constantly reminded to incorporate meta-learning strategies into the knowledge, skills, and character portions of our learning experiences, learning how to strive to improve no matter what goals we set for ourselves.”

If students are aware of what they are and are not learning, and how that might affect their shot at a job several years down the road, then they’ll at least be equipped with an extra level of control over their lives regardless of what kind of degree they’re pursuing.

Finally, Fadel says, “We will need the courage to innovate, letting go of the comfort of an existing system and working under conditions of uncertainty toward a better one.”

Courage, as it turns out, is another skill found off the beaten path.