The Difference Between Skilled Learners and Good Students 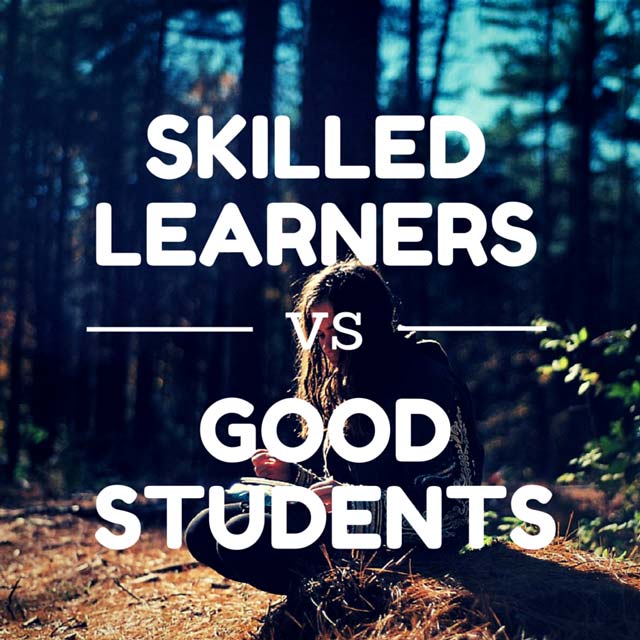 The skilled learners of the world don’t always excel in their studies. And I don’t mean Gates and Einstein. I’m talking about the huge number of people who are passionate about knowledge, who have a real knack for remembering facts, who are self-taught musicians and casual scholars. People who ignore homework because it’s boring to them, fail geometry because their teacher makes it boring to them, don’t listen to lectures because they’d rather absorb the information themselves. These people aren’t good students; they’re natural learners. And we’re doing them–and the world– a disservice by treating them like second class citizens.

“I spend a lot of time these days talking and writing about how we are asking teachers to redefine what it means to be a teacher,” writes David Warlick in his popular 2¢ worth blog. “But perhaps a significant part of this exercise in redefinition should involve our students– an explicit remolding of perceptions of these youngsters, in order to fully shift the relationship between student and teacher, learner and master learner.”

Here’s how he breaks down the difference between learners and students in his own chart:

Students are employees, expected to obediently follow instructions.
Learners are citizens with a vested interest in the learning society.

Students are competitors.
Learners are collaborators.

Students are culturally obliged to work for the teacher & for “compensation.”
Learners are motivated by an understood and realised “value” in their work, especially when it is valuable to others.

Students expect institution-defined grades as gateways to college and a good job.
Learners have a sense of ongoing accomplishment that is not delivered but earned, and not symbolic but tangible and valuable– an investment.

Students are compliant, group-disciplined, objective-oriented, and trainable.
Learners are persevering, self-disciplined, group-, goal-and product-oriented, resourceful, and learning in order to produce and accomplish rather than simply achieve learning.

Students are compelled.
Learners are curious.

“The bright child is interested and attentive; she listens to the material and is receptive; she enjoys her peers. She shows her attentiveness by staying in her seat and keeping her eyes on the teacher.” By contrast, he says, the gifted learner might feel confined by a formal learning setting. “He may have a hard time listening to the discussion of the Earth’s movement around the sun without actually moving his hands and arms in an elliptical fashion.” And that’s where the detachment or disinterest comes in to play. “She may enjoy the curriculum and its pace; he may tolerate it.”

“As a teacher I had students who were very good at school,” writes Beth Knittle, a former teacher in Massachusetts. “They completed assignments, copied notes, passed tests, and ended up with good grades. But I am not sure they remembered much beyond the final exam. It all seemed superficial. Likewise, I had students who hardly ever completed assignments, barely passed tests, could never find their notes, and their grades reflected this. But these same students could hold a lengthy conversation about what we were learning or about things they were learning outside of school, such as computer programming, music, or a foreign language. They were learners but they were not students.”

And it’s got to end now.

The Unfair Advantage of Being a Good Student

Researchers at the University of California Berkeley have found evidence of this discrimination, and it’s nothing short of appalling. What they’ve discovered is that students with the highest grades at grade-inflating institutions have the highest rate of acceptance into MBA programs. That’s right– higher than students whose GPAs were measured fair and square.

In their study, the researchers compared MBA program acceptance rates of students from institutions with and without grade inflation. The test admissions committee was also given data as to how candidates ranked against their peers. Finally, the lab results were compared to an analysis of real-world MBA admissions data. Here’s what they found: applicants from institutions with lenient grading were evaluated more positively simply because their GPAs were higher. They were also 31% more likely to move up from denied to waitlisted or from waitlisted to accepted.

“It’s really hard for people to look away from that glaring high number or that glaring low number of raw performance,” the researchers explain.

In their report, they admit that it may not be fair to assume that admissions staffs have perfect information about average grades at all other academic institutions. “After all,” they write, “these data were costly for us to collect.” Without the data, it would be difficult for admissions departments to use the information to discount grades appropriately, and they would simply have to rely on absolute GPAs as useful (if imperfect) measures of academic performance.

But this probably isn’t the case.

“This information is critical to their ability to interpret applicants’ GPAs, and admissions offices are likely to have better ways of obtaining these data than did we. A failure to demand it, in and of itself, suggests a failure to appreciate its value.”

What does this say, then, about our educational morals? And, most importantly, what does it mean for all the skilled learners of the world who face rejection because their passion can’t be quantified?

Research indicates that the use of traditional letter or number grades is reliably associated with three consequences. First, students tend to lose interest in whatever they’re learning. As motivation to get good grades goes up, motivation to explore ideas tends to go down. Second, students try to avoid challenging tasks whenever possible. More difficult assignments, after all, would be seen as an impediment to getting a top grade. Finally, the quality of students’ thinking is less impressive. “One study after another shows that creativity and even long-term recall of facts are adversely affected by the use of traditional grades,” Kohn explains.

This letter-grade-induced snowball effect, better known by experts as the “Matthew Effect,” creates a major opportunity divide between students with high and low GPAs. Skilled learners who repeatedly receive poor grades stop thinking of themselves as “college material” (if they ever did) and start lowering their own standards. And students who receive the highest marks go on to attend prestigious universities, where they meet well-connected and influential professionals who can hand them great career opportunities.

This is an old story. But what makes things interesting now, in 2015, is that it’s changing. The job market is over-saturated with degree holders who can no longer find work in soft disciplines like English and Art History. Instead, employers value people who can learn and adapt quickly, and who have the practical skills, like social media expertise and computer science savvy, that were undervalued just ten years ago. The irony is, it’s now a learner’s world, not a student’s. And it’s high time for educators and administrators to wake up and face the facts.

How to Accommodate Skilled Learners

We love students who make our lives easier, and for good reason. It’s complete bliss to grade the work of a student who has followed every direction and offered all the right answers– it means less work for us! But those aren’t the students who need our encouragement. It’s the individuals who truly disappoint us–not the ones we suspect will struggle but the ones we know don’t have to– the individuals who don’t turn in their homework and don’t study hard for exams. . .it’s those students who deserve to feel smart and capable. And it’s our job to make it happen.

Researchers at Dartmouth found that one of the main reasons cited by students for abandoning plans to study math, science, or engineering was a poor exam grade. Other studies have found that approximately 40 percent of students intending to study science or engineering end up switching to a non-science/engineering major. Many more students never make it to a science or math course because they hear from older students that these courses are difficult.

We need to stop this obsession with traditional letter grades as soon as possible. It’s harming students’ health and keeping great minds away from great opportunities.

For the student you saw dozing off during your lecture on the French Revolution, offer an alternative way of learning the same material. Ask them to read A Tale of Two Cities or watch a documentary. They’ll be glad you went out of your way and, in the end, so will you.

You were a student once. How easy it is to forget! There were teachers you liked, teachers you despised, and subjects you couldn’t get into no matter how hard you tried. As the instructor of your own course, you have to enforce certain standards and rules, but it pays off to put yourself in your students’ shoes now and then.

5. Remember that no one likes to fail.

It can be highly frustrating to see a student put little to no effort into an assignment. You wonder why they are so lazy, why they think they can get by without trying, how on Earth they got into your institution with such terrible study skills. But really, there’s always something deeper going on underneath the surface. No one wants to fail. Try to understand what’s hampering a student’s performance, whether it’s disinterest, stress, shyness, or some other factor.

Many of the brightest, most successful people I know were not good students. But they don’t consider themselves bright and successful, either because someone made them feel worthless early on in their educational career or because they gave up trying to compete with the straight-A crowd long ago. In the same breath, many of the good students I once knew no longer feel confident and capable because they don’t know how to direct their own learning and development once they enter the real world. Our education system needs to accommodate both skilled learners and good students, and prepare them for healthy, stable careers. It’s time to start valuing both types of individuals.

Leave a Reply to KerryJ