How Misremembering Happens in the Brain 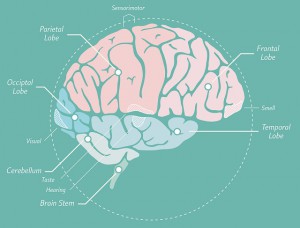 Researchers at University College London, along with colleagues at Harvard and DeepMind Technologies, have found that we all experience false memories, especially when we’re drawing from several pieces of conceptually similar information. Martin J. Chadwick, who led the study, scanned the brains of 18 volunteers as they recalled lists of words crafted around a “lure,” a word that related to but didn’t actually appear in the list, such as the word “cold” in the following list: “ice, snow, warm, blanket.” When volunteers were asked if, among other words, the lure word had appeared in the list, Chadwick looked for areas of the brain that lit up in conjunction with wrong answers (false memories, in effect). It turns out that a particular area of the brain, the temporal pole, is activated during false recall. The word list test has been used to study false memory since 1959, but Chadwick’s research sheds new light on how the brain organises information in a way that sometimes leads to misremembering.

“These results tell us our memories are not based on exactly what happened. There’s something more approximate going on, often referred to as a gist memory,” Chadwick says. “Rather than encoding every word, you’re building up an overall concept that you store in memory.”

It’s that concept that can lead us astray.

“Humans have a vast store of concepts, and we’re exceptionally good at using those concepts to make generalisations that allow us to come up with solutions to new situations and problems,” writes Simon J. Makin, who interviewed Chadwick for Scientific American. In the case of the word list test, the generalisation participants often make is that all the words can be categorised under the concept of “cold,” but doing so often leads them to think the actual word “cold” appeared when it didn’t.

This isn’t always a bad thing; it shows the brain is trying to process information in the most efficient way it can. Chadwick says “creating the gist” is actually helpful for retrieving true memories, and in most cases works for us rather than against us. In fact, his team also found that the more similar each list was to its lure, the more list words participants correctly recalled.

“This finding hints at a reason for why semantic memory is organised the way it is,” offers Makin. “As well as allowing us to easily see relationships among words and concepts, this organisational strategy enhances memory performance. False memories may just be the price we pay.”

So what, exactly, causes the brain to confuse itself under such circumstances?

The explanation researchers typically draw from the word list test is that a kind of “overlapping” occurs when similar—but not identical—meanings are represented by like patterns of activity in the brain. Think back to the last time you tried to recall the words or melody of a song but another, similar song got in the way. That’s your brain trying to separate two pieces of information that have been grouped together due to their similarity. The same mechanism that allows us to remember things quickly—faces, names, other people’s back stories—can also undermine the accuracy of our recall because, ironically, small details have been left out in our brain’s attempt to organise information as efficiently as possible.

Chadwick and his team believe that a particular part of the brain is responsible for this organisation (and therefore overlapping), and that it acts as a kind of “hub” with connections to various areas of a network distributed throughout the brain. Researchers have long suspected that such a hub exists; they just didn’t know where exactly.

“The hub is important because, since it can see everything at once, it can find properties that vary together,” says neuropsychologist Tim Rogers of the University of Wisconsin–Madison. “In so doing, we think it learns representations that express the degree to which different things are similar in kind, rather than just looking or sounding similar.”

Emotion and memory processed in the same part of the brain? No wonder we’re so susceptible to false recall.

Scientists have known for a long time that emotion can influence memory. One of the most famous examples is the “flashbulb memory,” a highly detailed, exceptionally vivid memory of the moment and circumstances under which an emotionally arousing event took place or highly salient information was received. These memories are notorious for changing over time. Since the early 1990s, a number of studies have examined how well people recall emotionally salient events like the O.J. Simpson verdict, the Challenger explosion, and 9/11. What researchers found is that flashbulb memories, when formed, are no less accurate than normal memories, but that emotion affects the accuracy of recall later on down the road.

In a seven-city investigation, 3,000 adults answered survey questions about their memories of learning about the 9/11 attacks at three points in time: one week, 11 months and 35 months later. Researchers found a dramatic inconsistency in what people reported after one week and after 36 months. “People are changing who they were with, how they found out about the attacks, those sorts of aspects,” they reported. In fact, forty percent of the time people misremembered some aspect of their 9/11 experience, especially when it came to how they felt. Why? Because what you’re feeling now affects your memory of how you felt then:

“You tend to project your current feelings about 9/11 on what you felt then. You see this in other aspects of daily life. For instance, if we ask college students how they feel about a boyfriend or girlfriend now, everything’s good. But if you ask them about the person after they break up, they’ll say they knew he or she was bad for them. Our emotions change over time, and it’s hard to get back in that initial emotional space.”

Rogers says this phenomenon has implications for issues in everyday life, like false memories in court case testimonies. “Understanding the mechanisms that cause people to confidently attest to false memories could be important for resolving those sorts of legal issues,” he explains. “If we really knew how concepts are represented and the degree to which their overlap is likely to cause false memories, maybe there would be ways of interrogating people that would avoid these sorts of cognitive traps.”