What Makes Some People More Creative Than Others? 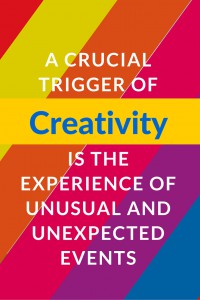 Roger Beaty, a Postdoctoral Fellow in Cognitive Neuroscience at Harvard University, held a study where 163 participants completed a classic test of “divergent thinking” called the Alternate Uses Task. The task involves asking people to come up with new and unusual uses for common objects. For example, a picture of a sock might show up on a screen and one participant might write “use it to warm your feet” while another participant writes “use as a water filtration system.” The participants underwent fMRI scans (brain scans that measure blood flow to different parts of the brain) as they completed the task.

What Beaty and his team found was that participants who came up with better ideas activated certain brain networks that less creative participants did not. In fact, the effect was so predictable that they were able to reverse the study and yield the same result: “We could estimate how creative a person’s ideas would be based on the strength of their connections in this network,” Beaty says.

So which network is it? Which particular area makes some of us creative while leaving others in the dark?

“We found that the brain regions within the ‘high-creative’ network belonged to three specific brain systems: the default, salience, and executive networks,” says Beaty. To be clear, these are networks we all have; we just don’t all use them the same way.

The default network is activated when you are engaged in spontaneous thinking (e.g. mind-wandering, daydreaming, imagining). “This network may play a key role in idea generation or brainstorming—thinking of several possible solutions to a problem.”

The executive control network is activated when you need to focus or control your thought processes. “This network may play a key role in idea evaluation or determining whether brainstormed ideas will actually work and modifying them to fit the creative goal.”

The salience network acts as a “switching mechanism” between the default and executive networks. “This network may play a key role in alternating between idea generation and idea evaluation.”

Here’s the interesting part: typically, these three networks don’t get activated at the same time. When the executive network is on, the default network is usually off, and vice versa.

So what does this mean, exactly? Beaty and his team hope it will lead to insights about whether creativity is fixed or fluid, and how less creative types can potentially train themselves to become more creative. But that will require further investigation. For now, let’s say brain scientists have moved us one step closer to understanding the neural mechanisms of creativity, and an important piece of the puzzle is this dual network functionality: the ability to let one’s mind wander and reign it in, making use of both processes at once.