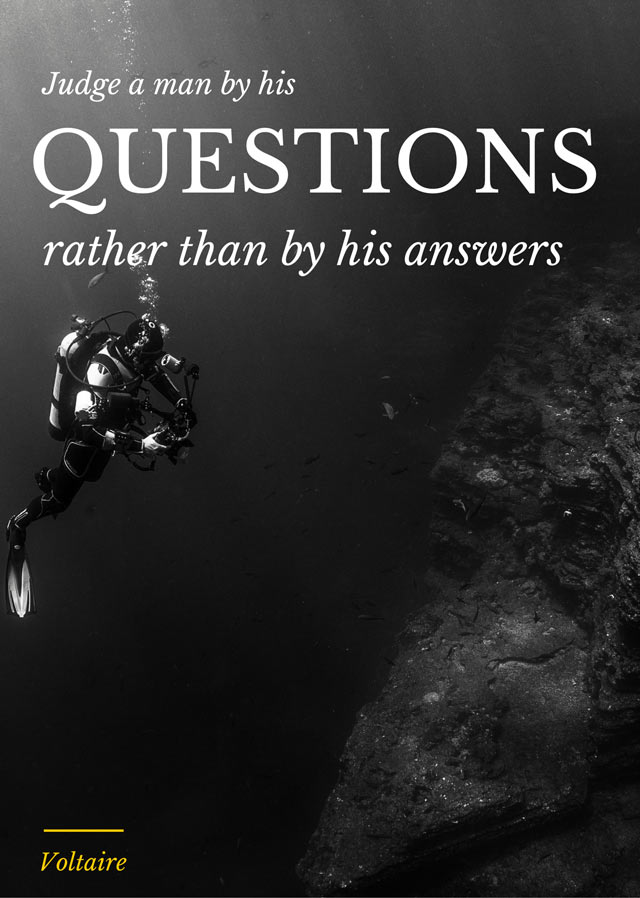 There’s plenty of literature on how to ask other people questions, but what about directing questions to ourselves? We can ask our students all the tricky questions we can think of, hoping to boost their critical thinking skills, but the ability to ask questions oneself–rather than just answering them–separates true learners from the rest.

Of course, this is similar to something like the Socratic method, where a series of questions help you reveal what you think about an argument or idea. Regardless of how you approach it, the end goal is to learn to think critically and analyze everything. As we’ve seen before, it’s important to always ask yourself why something is important and how it connects to things to you already know. As you do that, you train your brain to make connections between ideas and think critically about more information you come across.

What Makes a Good Question?

In his book, Glimmer: How Design Can Transform Your Life and Maybe Even The World, Warren Berger, co-founder of the New York writing collective The Marmaduke Writing Factory, sought to understand the ways that great designers create. He found at least one common trait: Designers are very good at questioning everything.

“Like the old joke—How many designers does it take to change a light bulb, and the designer’s answer is, Does it have to be a light bulb?—designers question why things are done a certain way, and whether there might be a better, more interesting way,” Berger told The Atlantic in a recent article.

Great inventions have arisen from such questions. Berger cites Polaroid instant photography as one such invention. It began when Edwin Land was taking a photograph of his four-year-old daughter with a standard camera. “She wanted to see the results right away, and he explained, no, it takes a few days,” he says. “But she wanted to know, Why do we have to wait for the picture? And this question got Land started on the journey that led to the creation of Polaroid instant photography.”

To Berger, a great question is something that should feel important, meaningful, profound—but also potentially answerable and achievable.

“Once you’ve set your sights on a question like that, the idea is to really tackle it. These are usually very difficult questions to answer. You can’t look it up on Google or answers.com—you have to grapple with it. You may spend months or years ‘living the question.'”

Berger, who has only just started his own journey, wants to track down the results, good and bad, of fundamental questions. “You see this a lot in Silicon Valley, for instance, where so many of these radical new ventures can be traced back to a great question,” he says. But he is also interested in people who are asking, “What if we rethink the way schools work?” or “Why are we designing prisons this way when we could be doing it that way?”

How to Ask Yourself Better Questions

1. Start with the fundamental.

Berger says there are two kinds of questions that don’t get asked early enough during the learning journey. First are the fundamental ones: Why am I learning this? Why do people care that I learn this, and why should I care? These are the kinds of questions you can benefit from early on, when you are in the most open stage of thinking.

A great question tends to evolve. “In studying innovators,” Berger says, “I’ve found that once they take on a big question, they often proceed through various ‘stages of inquiry’ that gradually lead them toward an answer. They may not always get to the answer they want, but they do arrive at something.” He has labeled these stages as “speculative inquiry,” “contextual inquiry,” “constructive inquiry”—all steps in a process that keeps the questioner moving forward on the journey.

“Second are the crazy questions,” Berger says. “What if we did this backward? What if we were to subvert all the assumptions in the field and do something that sounds ridiculous? Interesting ideas can come out of exploring impossible things.”

4. Recognize and confront your biases.

Thinking critically is all about confronting those biases as often as possible. It’s tough, but if you take the time to think about opposing views throughout the day, you’ll train your brain to do that more often.

Always consider using follow-up questions. Unless you are looking strictly for the facts, there is some sort of assumption in the answer the person gives you. Ask them a follow up question such as, “What makes you say that?” or “Why do you think that?”

6. Make a Habit of Imagining Alternatives.

Ask yourself, “Why are the relationships between the parts structured that way? How could it be different? What would it look like if it was different?”

Berger warns us: “Be careful. People like to be told what they already know. Remember that. They get uncomfortable when you tell them new things. New things… well, new things aren’t what they expect. They like to know that, say, a dog will bite a man. That is what dogs do. They don’t want to know that man bites a dog, because the world is not supposed to happen like that. In short, what people think they want is news, but what they really crave is olds…not news but olds, telling people that what they think they already know is true.”

7. Improve Your Powers of Observation by Taking Field Notes Like a Scientist.

“Critical thinking doesn’t end. The more knowledge you cultivate, the better you’ll become at thinking about it. It’s navel gazing in that you’re constantly thinking about thinking, but the end result is a brain that automatically forms better arguments, focused ideas, and creative solutions to problems.

One of the most important parts of thinking critically is learning what details matter. We’re exposed to so much information and so many different opinions every day that it’s really easy to get lost in the details. Subsequently, we need to train ourselves to learn which details matter and which don’t. Start by listening to your gut. If something doesn’t sound true, that’s your first warning sign. From there, you can start looking for other holes in an argument.”

8. Who’s Benefitting from a Particular View?

9. Be Skeptical Without Being Cynical.

“Look for obvious statements: A common trick in debates, reviews, and even personal essays is to couch a critical argument inside a series of obviously true statements. These sort of non sequiturs are easy to miss because by the time they come along you’ve already started agreeing with a statement. Here’s an extreme example: ‘So, now we know the sky is blue, that grass is green, that clouds are white, and that Apple makes the best computers.'”

10. Think About Your Own Thinking.

Author and psychologist Maria Konnikova suggests a few ways to do this, using Sherlock Holmes as an example:

“After he sets his goals, he goes about observing and collecting data, and asking: okay, how do I answer this question?’ and ‘What is it about this conversation, about this person, about this situation, whatever it happens to be, that will enable me to gather the data that I will then be able to use to see whether my hypothesis holds up?’ Then he does this thing that every great scientist does, and I think mediocre scientists probably do not, which is take a step back and learn to look at the data, recombine it, look at different possibility, be imaginative with that data to see, is there anything that I didn’t think of beforehand? Is my mind still open? Do I still know what’s going on? Does this data somehow make me think of new ideas? Think of new approaches? Think of things that I hadn’t thought of in the past?”

Berger is also trying out an idea called “collaborative inquiry,” tapping into the ideas of young people interested in the subject. “I’m used to working alone in my cave as an author, but this idea is so big and challenging, I just felt like I didn’t want to go on this journey by myself.” So on his website he asks people to submit their own “Beautiful Questions” and invites them to join him in the investigation. “I’m asking a team of selected collaborators, not a random ‘crowd,’ to help me as I put together the answer. As the book’s author, I’ll still make all the decisions and do all the writing—but hopefully the team will unearth some great raw material that I could never find on my own. I’m very conscious of the fact that I’m asking people to do something for nothing, so my hope is that I can make it an enjoyable, enriching experience.”

The average 5-year-old questions everything. Yet research shows that many of us begin to question less and less as we get older. Is it the school system, which tends to prize memorized answers over creative questions? Is it because we feel social pressure to ‘seem smart?’ Or maybe it’s a business culture that discourages employees from questioning entrenched corporate policies and practices?

“I started off with the [theory] that one had to learn how to be a better questioner,” Berger says. “But now I’m starting to think it’s about re-learning–because the truth is, we all start out as questioners.”

Leave a Reply to Rob