Is 'Good Enough' Enough? 10 Ways Students Can Learn to Excel 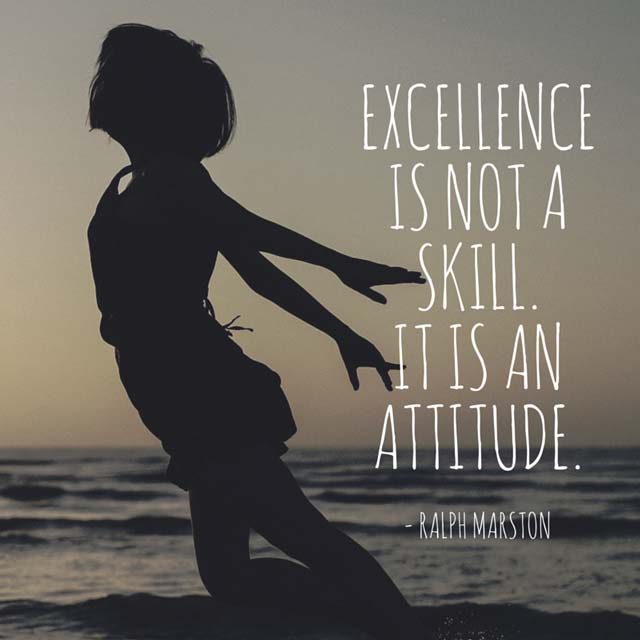 Few things are more disappointing to a teacher than watching a student squander his or her potential. It can happen on a major scale, quite abruptly, as a student struggles to balance learning with a stressful life at home. Or it can happen on a minor scale, in a gradual way, such as witnessing the quality of a bright student’s work slip over the course of a semester.

But what’s perhaps most frustrating–and most common–is when students simply don’t know how to excel. You know they have the potential–you’ve seen it–but when it comes to writing essays, the work they produce tends to hover right around the mediocre mark.

So how do we motivate these students to reach a little farther, try a little harder, and finally learn to stand out from the crowd?

You might think it’s all about reward. Give these students more incentive and they’ll find the drive to excel. Researchers at Carnegie Mellon University have actually found that rewards can discourage effort in several important ways. First, students may lose motivation to work on particular tasks if they do not feel that there will be a payoff for their time and effort. For example, students may not keep up with the readings if that knowledge is not needed to complete exams and assignments.

Second, students may not do an assignment well if the time and effort required is incommensurate with the points they would earn. Third, students may lose motivation to work on specific elements of an assignment if their efforts in those areas are not rewarded (for example, if an instructor urges students to write original arguments, but bases grades primarily on organisation and mechanics). Students may also lose motivation to excel if the instructor does not draw a sufficient distinction between excellent and poor performance.

Or maybe it’s all about praise. Openly admire a student’s work and she’ll rise to the occasion, right? Not if she doesn’t think she can. In a series of recent experiments, researchers at Southampton University set out to test the impact of inflated praise on students who suffer from low self-esteem. They theorised that parents and teachers often give such praise to raise students’ self-esteem, but that this approach would backfire. And it did.

In a representative study, 240 young students were asked to copy a famous Van Gogh painting, receiving inflated feedback from someone only identified as a professional painter. They were then asked to draw other pictures of their choosing. They were told some of the pictures were easy to copy though the students wouldn’t learn much, while others were difficult and, although they might make many mistakes, the students would definitely learn a lot. The students with low self-esteem who had been lavishly praised chose the easier pictures while those with high esteem opted for the more difficult ones.

So if the obvious methods won’t work, what will? What can teachers do to spark that natural urge in students to go above and beyond? Here are a few ideas:

If all student work, regardless of quality, receives the same reward, there’s little incentive for students to excel. Imagine, for example, if an instructor responds just as positively to poor answers as to strong answers. “Over time,” researchers at Carnegie Mellon explain, “this failure to differentiate levels of performance may demotivate high performers (who do not feel that their extra effort is acknowledged) as well as low performers (who have little incentive to step up their game).” With this in mind, one important way to motivate students is to clearly articulate qualities of excellent performance, assess student performance according to these qualities, and provide feedback that will help students improve.

Performance rubrics provide one tool for doing so. A rubric for participation might articulate the characteristics of meaningful and productive participation (e.g. thoughtful, informed contributions that build on what others have said) so that the difference between high-quality and low-quality participation is clear. “By articulating these distinctions and providing feedback to help students improve, instructors can enhance motivation as well as learning.”

2. Reward the characteristics of student work you want to see.

Sometimes instructors think they are motivating one kind of performance while actually rewarding another. For instance, if instructors urge students to be risk-takers, but penalise failure excessively, students will be more motivated to play it safe than to take risks. Similarly, if instructors claim to value teamwork and collaboration (and we know how important these skills are) but do not assess these skills (instead grading only the group’s final project, which may have involved little teamwork), students may not be motivated to practice these skills. With this in mind, it is important to consider whether your grading system directs student’ efforts appropriately.

For instance, if you want students to take risks, you may want to focus your grading less on the quality of the final product and more on the number and originality of ideas students generate. If it is important to you that students develop teamwork skills, you might want to assign a grade not only for the work students submit, but also for the group’s interactive process (e.g. the team’s ability to work collaboratively, communicate effectively, and address conflicts productively).

Visual cues serve as easy and consistent reminders for your students. When you feature important information–such as the core principles of the course–in the form of goal charts and accomplishments on the wall, you make it easy for your students to remain aware of your expectations and stay on task toward accomplishing their goals. Hang visual reminders up in places that are easy to see at any time but are not a distraction to your teaching efforts.

Smaller subgoals led to faster completion and more accurate answers than one large goal. This has been demonstrated so often that researchers now take it for granted. Having concrete sub-goals can focus attention, maximise effort, increase persistence, and cause individuals to utilise their knowledge and skills (Locke & Latham 2002). 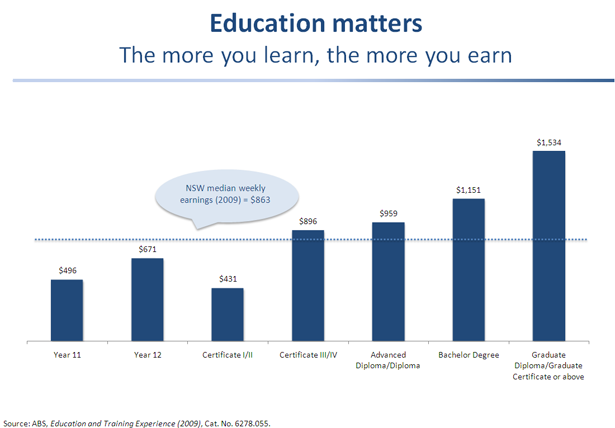 Educator Larry Ferlazzo hits the nail on the head with this sage recommendation. Multiple studies have shown a wide income disparity based on educational attainment.

For example, according to the U.S. Census Bureau, adults with advanced degrees earn four times the salary of those with less than a high school degree. There are similar differences between the likely length someone will be unemployed, one’s overall health, and even how long people will live – women without a high school education, for example, is more likely to suffer from depression.

Research demonstrates that just showing students this kind of information can result in students being more motivated to learn.

In the chart above, the ABS (Australian Bureau of Statistics) shows the higher your education level, the higher you earn in Australia.

“Students with a strong sense of efficacy are more likely to challenge themselves with difficult tasks and be intrinsically motivated,” says Karin Kirk, a researcher for SERC. “These students will put forth a high degree of effort in order to meet their commitments, and attribute failure to things which are in their control, rather than blaming external factors. Self-efficacious students also recover quickly from setbacks, and ultimately are likely to achieve their personal goals.”

On the other hand, students with low self-efficacy believe they cannot be successful and thus are less likely to make a concerted, extended effort and may consider challenging tasks as threats that are to be avoided. “Students with poor self-efficacy have low aspirations, which may result in disappointing academic performances becoming part of a self-fulfilling feedback cycle.”

8. Challenge each student with a goal to beat their own “personal record.”

Previous research into the motivation and efficiency of students has indicated that students who set their own working goals tend to achieve more than when working on goals set for them by the teacher. Students who set their own learning goals have more confidence to take on more challenging tasks, regardless of their ability. Their motivation to improve and master a task is improved and their self-esteem remains strong, even in the case of failure.

In addition, each of your students is at a different point in his or her academic career. Some students may struggle with math, while others struggle with writing. For many teachers, this makes creating group challenges difficult. Instead, allow your students to eliminate the peer pressure that may be holding them back by challenging each student individually to beat their own personal best.

When we create a curriculum, we rarely bother to consult students about it. But many different fields of research have found that people benefit from experiencing a sense of control over their lives. In a classic Eight-Year Study, 30 academies were encouraged to develop innovative programs whose “essential value was democracy.” Researchers found that the graduates of those academies did better than a matched comparison group from their traditional counterparts.

In fact, the students who were most successful tended to come from the organisations that had departed most significantly from the conventional college-prep approach. Read more about how to develop a choose-your-own-adventure model of learning.

Based on data from a survey of 121 baccalaureate and master of social work students at a western university, a 2013 study published in the Journal of Social Work Education explored students’ perspectives of “safe” and “unsafe” learning environments. The majority reported that being in a safe learning environment changed both what and how much they learned. Educational research supports creating an atmosphere of mutual respect and support, where students feel safe in expressing concerns or asking questions, and where tolerance and a sense of common identity and community are present.

This not only helps maximise student learning and motivates students to step outside their comfort zone, but also makes managing your class a whole lot easier.

To see our students fulfill their academic potential, we must first provide the resources and cultivate the environment they need to do so. Focusing on individual progress, recognising excellence, and creating a respectful learning environments are just the tip of the iceberg, but they can do a lot to motivate students. Keep these things in mind as you design ways to bring out the best in your students.