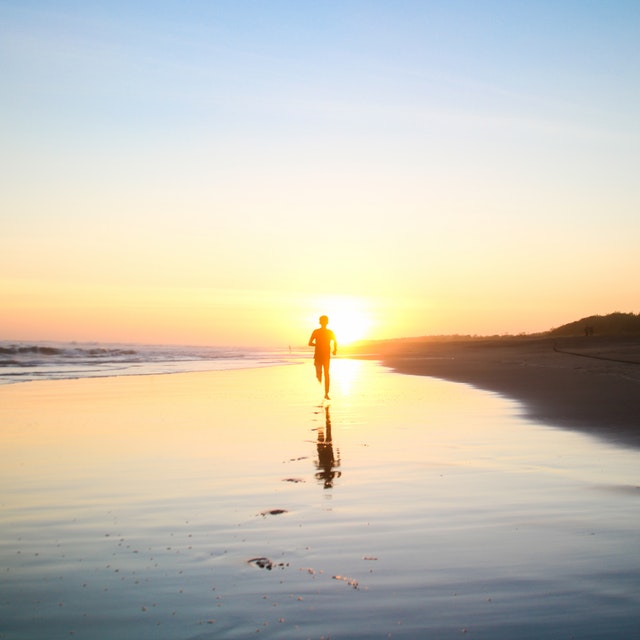 You’ve likely heard that exercise is good for the brain, but could you explain why exactly? An exciting piece of research from the National Institutes of Health (NIH) points to a very specific kind of exercise that directly affects brain health, spurring the creation of new cells. For those of us wondering whether it’s worth it to push ourselves and go the extra mile, this research offers a convincing argument for picking up the pace and extending our training a little longer than we might think necessary.

For the study, published in Cell Metabolism, NIH researchers isolated muscle cells from mice in petri dishes and added a peptide (an enzyme) that boosted cell metabolism, mimicking aerobic exercise and making the cells “think they were running.” Then the researchers tracked which proteins were released during the “exercise,” specifically looking for the ones that crossed the blood-brain barrier. One particular protein, called cathepsin B, spurred neurogenesis (brain cell creation) once it reached the brain. Cathepsin B is an important protein in helping sore muscles recover, helping to clear away cellular debris. Scientists had not, until now, considered it related to brain health.

During further testing with colleagues in Germany, the NIH researchers measured levels of cathepsin B in the bloodstream of mice running regularly for several weeks and humans (young men and women) running regularly for four months, exercising vigorously around three times a week for an hour or longer.

Concentrations of cathepsin B rose steadily in all subjects, as predicted, but here’s the interesting bit: All of the runners began performing better on memory and thinking tests.

Most striking, says Gretchen Reynolds for the New York Times Wellness blog, is that in the human volunteers, “the men and women whose fitness had increased the most–suggesting that they had run particularly intensely–not only had the highest levels of cathepsin B in their blood but also the most-improved test scores.”

Just to make sure it was really cathepsin B responsible for these improvements, the scientists bred mice that could not produce it and tested their ability to retain information after exercising. Those mice “learned haltingly and soon forgot their new skills,” which suggests that if we want to gain the biggest brain boost from exercise, it needs to be exercise that spurs the creation of this protein.

High-intensity, long-term endurance training appears to be correlated with the highest cathepsin B levels.

That’s not to say light exercise isn’t beneficial. “Any amount of exercise is going to be better than none,” says Henriette van Praag, an NIH investigator and who oversaw this study, but the lesson of these experiments is that “our brains appear to function better when they are awash in cathepsin B.”

For all the hype surrounding brain training games and the like, the fact appears to be that physical exercise aids brain power just as much, if not more, than mental exercise. Reynolds, a researcher herself, puts it this way: “These experiments strongly suggest that while mental stimulation is important for brain health, physical stimulation is even more potent.”

Next time you’re wondering whether you should train for a longer race, or move your legs a little faster, or head out the door at all—think of these findings and push yourself to do it. You’ll be helping your brain out as well.