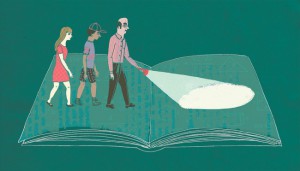 Collaborating in a group to remember information can actually harm recall, according to new research from the University of Liverpool. The study, which was conducted by psychologists from both Liverpool and the University of Ontario Institute of Technology (UOIT), analysed 64 earlier studies on collaborative memory and provides the “first systematic investigation into the costs and benefits of collaborative remembering.”

In 2013, for example, psychologists at Western Washington University discovered that, when recalling lists of categorised words, “individuals’ idiosyncratic retrieval strategies are disrupted by hearing the contributions of others.” They sampled from fewer categories, therefore recalling fewer words, and were compelled to recall words later rather than earlier in the retrieval process, which reduced the total number of words recalled.

A study from 2014 found that collaborative inhibition even applies to spatial memory capacity, not just traditional memory stimuli like word lists. When participants were told to study a specific layout of objects and then asked to reconstruct that layout from memory, collaborative pairs’ results were less accurate than the combined results of individuals.

Importantly, recall is greatest when people can use their own preferred retrieval strategies,” Thorley explains. “During collaboration, members hear each other recall information using competing retrieval strategies and their preferred strategies become disrupted. This results in each group member underperforming and the group as a whole suffers.”

Thorley and Marion also found that collaboration is more harmful to larger groups than to smaller groups, and that friends and family members are more effective at working together than strangers:

But group work does offer some benefits to recall: The researchers also found that collaborative remembering boosts later individual learning, meaning people who previously recall in a group remember more than those who do not.

“We believe that this occurs as working in a group means people are re-exposed to things they may have forgotten and this boosts their memory later on,” Marion says. “One of the important consequences of this is that it suggests getting people to work together to remember something (e.g., students revising together) is beneficial for individual learning.”