Academic Challenges: 5 Ways to Enjoy the Work You Put In 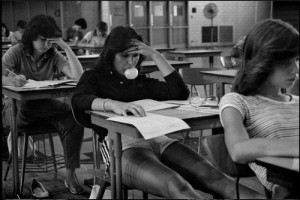 We all like to be challenged, at least to a certain degree. It’s what makes crossword puzzles and murder mystery novels so enjoyable. But some people seem to approach challenges with more gusto than others, choosing the more difficult path over the easier route when faced with a problem. Why is this? Is it a matter of patience? Do some of us simply have a higher capacity for delayed gratification? And how do we even know that a struggle will pay off? Does an uphill battle always end in greater gains? Below we investigate some of the psychological factors involved in embracing or avoiding academic challenges, and offer a few strategies for those interested in rolling up their sleeves more often.

Why Should You Enjoy Academic Challenges?

For one thing, because employers want you to.

In interviewing future doctors, Dr. Laurie Glimcher, dean of Weill Cornell Medical College, looks for a very specific trait: They have to love a challenge.

“As a scientist, if you’re not willing to take big risks and try daring experiments, what is the point?” Glimcher said in an interview with the New York Times. “You’ve got to put everything on the line — 98% of experiments fail, so the only kind of science I ever wanted to do was transformative science.”

The medical field frequently forces employees out of their comfort zones, so they have to be prepared to tackle challenges as part of their job description.

Embracing challenges pays off on your end when it comes to career choices, too:

“The truth is, if your only goal is doing something you love, chances are you’re simply taking the easy path,” writes Carey Smith for Inc. “If I’d gone that route, I probably would have been a history major in college. I love it, and because I do, it seems easy. Instead I majored in economics partly because the ‘dismal science’ can be so damn hard to understand. Decades later, I still want the same kind of challenge. That’s why I look forward to work every day.”

Maybe most importantly, seeking out challenges can be enriching on a personal level.

People who excel at academic challenges “have greater intrinsic interest and deep engrossment in activities, set themselves challenging goals, and maintain strong commitment to them,” says Thomas Markham, psychologist, school redesign consultant and author of The Project Based Learning Design and Coaching Guide: Expert tools for inquiry and innovation for K-12 educators.

This kind of attitude can only lead to rewarding results. The more challenges we accept and overcome, the higher our confidence level becomes and the easier it is to tackle bigger tasks in the future. So what about those of us for whom the real challenge lies in cultivating this mindset? We’ve got a few answers for you below.

Can You Learn to Enjoy Academic Challenges?

You may have heard of psychologist Walter Mischel’s famous Marshmallow Test, first conducted in 1960. The test involved presenting small children with a marshmallow, a cookie, or a pretzel and giving them two options: to go ahead and eat the treat or wait a few minutes and get two treats. If children chose to eat their treat right away, they were given a low rating for their capacity for delayed gratification, and if they chose to wait they were given a high rating. The theory was that these results would translate into other areas of life as the children grew up: the children who waited, for instance, would most likely turn into adults who enjoyed academic challenges and didn’t always take the easy route.

But a recent interview with Mischel casts a different light on the original study. Discussing his findings with Alix Spiegel of NPR, Mischel pointed out that a second part of the test is often left out of modern retellings. When Mischel told the children ahead of time that they could “pretend the marshmallow was not really there,” they tended to wait—often up to 15 minutes—for the additional treat.

“It’s a very small change that’s been made in how the child is representing the object—is it real or is it a picture? And by changing the representation, you dramatically change her behaviour.”

The deeper point of the Marshmallow Test, then, was to show that people—even small children—can enhance their capacity for delayed gratification just by “reinterpreting the way they frame the situation around them.”

This means we can also change the way we view academic challenges. Imagine a scenario in which you’re assigned a ten-page essay on a topic you find uninteresting, and instead of trying to make it interesting for yourself, you’re tempted to do a shoddy job and call it done. Here are a few things you can do to turn things around for yourself:

1. Imagine you’re going to have a conversation about the topic with someone you want to impress.

Nothing’s more rewarding than a personal reward. Whenever possible, find a way to connect academic challenges to personal challenges and the rewards will be tenfold.

2. Pretend you are only allowed to write one page on the topic.

At first, you’ll feel relieved. One page! You can do this. But in reality one page is just long enough to get your academic juices flowing, and chances are you won’t be able to include everything that comes to mind without going over your self-imposed limit. Before you know it, you’ll be enjoying the writing and stacking up the pages.

3. Imagine you’re the only person for the task.

Sometimes we’re limited by the thought that others might have more, or better, things to say on a topic. Instead of assuming you can’t contribute anything substantial to the discussion, imagine you and you alone have been asked to voice your opinion, and that there are throngs of readers waiting eagerly to hear your remarks. If you can’t quite get your imagination to run that wild, ask a few friends to agree to read your essay once it’s finished so you feel like you have a real audience.

How to View Academic Challenges as Rewarding

“Students’ difficulties in basic academic skills are often directly related to their beliefs that they cannot read, write, handle numbers, or think well—that they cannot learn—even when such things are not objectively true,” write education researchers Pajares and Schunk of Emory and Purdue Universities respectively. “That is to say, many students have difficulty in school not because they are incapable of performing successfully but because they are incapable of believing that they can perform successfully—they have learned to see themselves as incapable of handling academic work or to see the work as irrelevant to their life.”

2. Expect that things won’t be easy.

Sometimes simply resetting your expectations is all it takes to start viewing academic challenges in a more positive light. When we expect tasks to be easy, and they turn out to be difficult, we tend to want to give up. But if we approach tasks with the more realistic expectation that they might challenge us, we give ourselves the necessary mental preparation to persevere when things get tough.

If learners “heighten and sustain their efforts in the face of failure,” says Markham, “they more quickly recover their confidence after failures or setbacks, and they attribute failure to insufficient effort or deficient knowledge and skills which are acquirable.”

3. Shoot for your zone of proximal development.

Developed by Soviet psychologist Lev Vygotsky, a learner’s zone of proximal development (ZPD) is the mental range that defines your capacity to master new concepts based on your existing background knowledge and/or skill sets. It’s basically the Goldilocks paradigm applied to an academic setting: Make sure tasks aren’t too easy or too hard, or you’ll give up out of boredom or frustration.

“In the middle of every difficulty lies opportunity,” said Einstein. Needless to say, that belief served him pretty well in his career. If you approach each academic challenge with the mindset that there’s something to be gained from it, you’ll start viewing it in a more positive light.

“When students lack confidence in their capabilities, they are likely to attribute their failure to low ability which they perceive as inborn, permanent, and not acquirable,” Markham notes. “For them, failure is just another reminder that they are incapable. Students who doubt their academic ability envision low grades often before they even begin an examination.”

He’s describing an aspect of what psychologists call the fundamental attribution error, or the tendency to attribute failures to personal flaws rather than situational factors. Just because you received a poor grade in your biology class in secondary school doesn’t necessarily mean you’re terrible at biology; it could simply mean you didn’t study effectively, or didn’t find your instructor engaging enough to keep you interested. The point is, don’t sell yourself short. Our abilities aren’t set in stone; they are highly dependent on a variety of factors, from how often we use them to when and how and where we do.