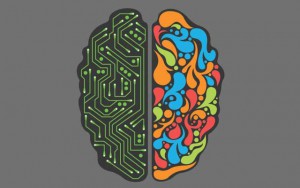 “Truly creative people don’t just ‘let it all hang out.’ They are meticulous and picky and fussy. They work hard to produce something harmonious and aesthetically satisfying.” –Joseph S. Salemi

The old notion of the intellectually liberated creative genius, guided by intuition and strokes of inspiration rather than careful calculation, is, as it turns out, not only unrealistic but inaccurate. New research sheds a surprising light on what’s going on inside the brain when we create, and suggests that the “free thinking” paradigm provides an incomplete picture at best. We discuss some of the implications below.

Two Opposing Parts of the Brain

Researchers at the University of Haifa have found that developing a creative idea requires the simultaneous activation of two completely different—and seemingly opposing—networks in the brain: an associative (or spontaneous) network and a conservative network.

The associative network, located in the anterior medial region, is where you’d expect creativity to unfold: it’s the part of the brain responsible for “free thinking,” open-mindedness, and drawing connections between seemingly disparate concepts. For example, when writers use similes or metaphors as literary devices, they’re activating their associative network. It operates on a more sub-conscious level, too, such as when we daydream or imagine future events.

In the first part of their study, participants were given half a minute to come up with a new, original and unexpected idea for the use of different objects. Answers which were provided infrequently received a high score for originality, while those given frequently received a low score. In the second part, respondents were asked to give, within half a minute, their best characteristic (and accepted) description of the objects. During the tests, all subjects were scanned using an FMRI device to examine their brain activity while providing the answer. For participants whose originality score was high, the researchers found increased brain activity in the associative region of the brain.

But when it came to providing creative solutions—not just original but also reasonable and applicable—the associative network did not operate alone. For the answer to be creative, a more “conservative” region, related to administrative control, was also involved.

“Creativity is our ability to think in new and original ways to solve problems,” the researchers explain, “but not every original solution is considered a creative one. If the idea is not fully applicable it is not considered creative, but simply one which is unreasonable.”

One way of explaining this is that creative thinking requires “checks and balances.”

“On the one hand, there is surely a need for a region that tosses out innovative ideas, but on the other hand there is also the need for one that will know to evaluate how applicable and reasonable these ideas are,” says Dr. Naama Mayseless, who led the study. “The ability of the brain to operate these two regions in parallel is what results in creativity.”

What’s more, the stronger the connection (the better these regions work together in parallel) the higher score the answer received on measures of creativity.

“It is possible that the most sublime creations of humanity were produced by people who had an especially strong connection between the two regions,” Mayseless notes.

Thinking Inside the Box

“A box is a frame, a paradigm, a habit, a perspective, a silo, a self-imposed set of limits; a box is context and interpretation. We cannot think outside boxes.” –Mark Chussil for Harvard Business Review

Joel Chan and Christian Schunn of the University of Pittsburgh’s Learning Research and Development Center, along with Steven Dow at Carnegie Mellon University, have published findings that not only support Mayseless’s, but also take it a step further.

Collecting data through OpenIDEO, a web-based crowd-sourced innovation platform intended to help people address a wide range of social and environmental problems like human rights violations and job growth for youth, Chan and Schunn found that traditional notions of thinking “outside the box” don’t often apply to creative situations in the real world.

Examining whether these solutions were conceptually “near to or far from” the posted problems, the researchers plugged them into an algorithm that had been vetted against human judgments and found to be adept at determining idea distance. The algorithm showed that the vast majority of ideas that made the list were closely related to the posted problem.

In other words: “Instead of seeing a bigger effect of far inspirations,” Chan says, “I saw that ideas built on source ideas more closely related to the problem tended to be selected more often. And I saw the same pattern across 12 very different problems—ranging from preventing human rights violations to fostering greater connectedness in urban communities to improving employment prospects for young people.”

Unlike most creativity studies, which tend to span a short period of time and test a small pool of people, Chan’s study lasted over ten weeks, included 350 participants, and examined thousands of ideas. “Creativity studies typically have many participants solve ‘toy’ problems or observe few participants solving real problems,” he explained. “In our study we had both, lending greater strength to our conclusions.”

“For people needing fresh inspiration for a problem, these findings imply that you shouldn’t just go off and talk to random people or read things totally unrelated to your problem.” These might yield novel ideas, Chan explains, but not necessarily useful ideas.”

Where Do We Go From Here?

These findings might not seem earth-shattering, but they can affect the way we approach creative endeavours in our day-to-day lives. Here are a few recommendations for changing your creative routine based on the research.

Toni Morrison once said that she began writing novels when she’d run out of books to read at her local library. In essence, she “wrote the book she wanted to read.” The same thing happens when we know all there is to know about a given topic. It’s the main driving idea behind Masters’ theses and doctorate research: to find out which questions have been answered so that we can ask new ones.

2. Consider the resources you have before seeking new ones.

This isn’t some backhanded admonishment about wasting a perfectly good box of crayons on a fancy set of colored markers. It’s to say that the resources you currently have at your disposal might, for various reasons, actually be better suited to your task than the ones you don’t yet have. Think of all the times you tried to use the newest, best, state-of-the-art materials and ended up going back to the old tools because you trusted them more or had a better creative track record with them or they just felt right in your hands. Again, new isn’t always better.

3. Be sure that your form has a function.

You hear this one a lot in writing circles: Don’t experiment for the sake of experimenting. If you’re going to do something different, such as eliminate quotation marks from dialogue in a short story, don’t do it just to be different (or to mimic Cormac McCarthy); do it to create a desired effect, such as a muted mood or a more immersive reading experience. The same goes for creative efforts in other disciplines: If you really want to produce something that stands out, make sure it stands out for a reason.