Why Being A Journalist Is The Best Job In The World

Ever wondered how a successful journalist forges their path to success? Renowned Journalist and media personality, Shelly Horton shares how she did it and why she loves the industry.

Hello I’m Shelly Horton and I’m a journalist. I truly believe being a journalist is the best job in the world - I have it.

Presently I run my own video production company, ShellShocked Media, where I make native video for clients and produce my own online video projects. I’m also a regular on Channel Nine three times a week, with opinion segments on Today, Today Extra and Weekend Today.

Now let’s be serious, journalism is a tough industry to be in at the moment

Print is slowly dying; newspapers are making people redundant while once loved magazines are closing down. TV is feeling the pinch thanks to on-demand viewing and binge-worthy Netflix productions. Radio has competition from podcasts.

But the one area that is booming is online journalism. And video content is king.

As your profession changes, you have to change with it or you’ll be left behind. In society it’s not the smartest or strongest – it’s the most adaptable who survive.

I’ve been working as a journalist for 23 years and I’ve never been unemployed.

The thing I love the most about journalism is its adaptability 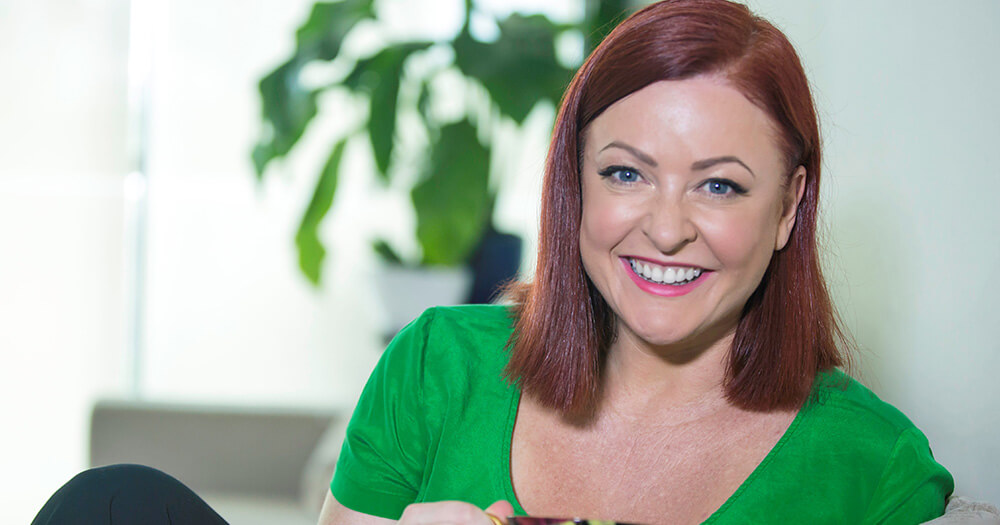 Yes I’ve had a lot of jobs but that’s what I love about journalism. Every day is different and the industry has so many interesting facets.

I believe it is all thanks to my motto “adapt or die”.

Back in 1993 I finished a journalism degree at University of Queensland. I moved to Melbourne and got a job at ABC Radio becoming the only female reporter covering the crime round. I listened in to the police radios, attended crime scenes and walked with police on murder hunts. During my four years on that round I saw seven dead bodies and instead of being repulsed I was fascinated. My life felt like an episode of CSI.

I was very happy at ABC but I’d always wanted to work in London so I booked a one-way ticket and set off.

I got a job at Channel One, which was a 24 hour local news station – a bit like Sky News. My job sucked, I was a line up producer, basically checking spelling and making sure the stories were ready in time.

But when the sports presenter turned up with laryngitis, I was asked to fill in. The next day the boss gave me my own entertainment show! It was my big break! 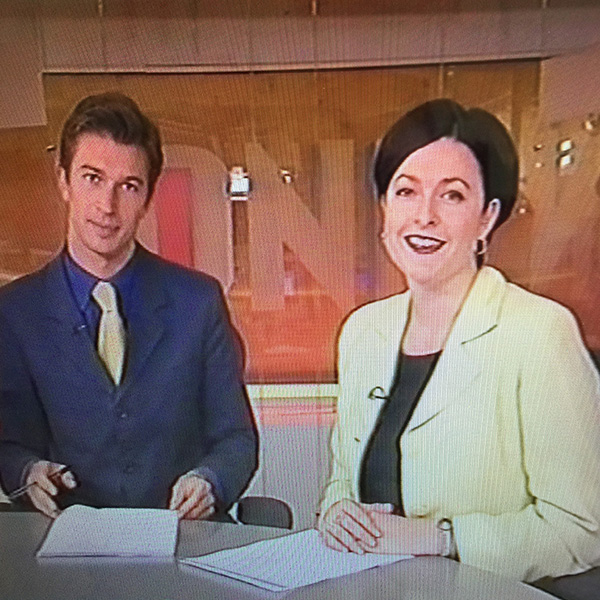 Excuse the poor quality photo and the helmet hair but it was 1997 in London.
Photo credit: Shelly Horton

Then nine months later the entire station closed down. You don’t become a journalist if you want stability.

I decided to come back to Australia

I landed a job as a field producer at Channel Nine on the Australian version of Entertainment Tonight. Now I’d never been a TV field producer before but I figured I’d done radio and TV studio work and, well, adapt or die.

Then ET America poached me to be their South Pacific Producer. I went to Borneo for the first ever Survivor; I interviewed all the big stars, including Tom Cruise, Matt Damon and Dwayne Johnson. 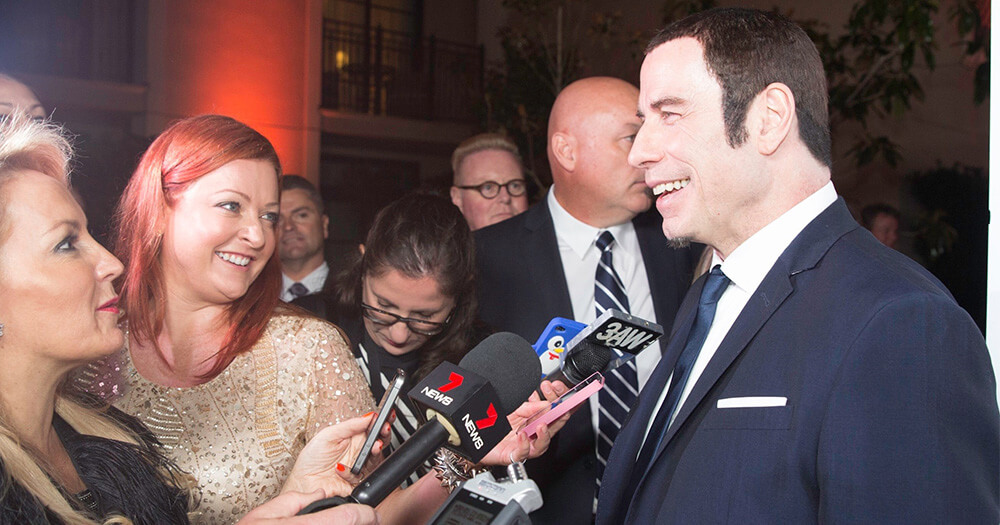 I got a job as a producer on A Current Affair but after a year of chasing dodgy repairmen, I jumped ship and moved back into the loving arms of Aunty as a newsreader on Triple J.

Then I scored a job as health reporter on George Negus Tonight on ABC TV. ABC always has tight budgets and my years of field producing meant I was valuable as a presenter/producer. With me they got two jobs in one salary. I was very happy there, but all good things come to an end and after a few years the show was axed.

I started getting some regular spots on the Today Show - back when Steve Leibmann and Tracey Grimshaw were hosts – yes that’s how old I am. Then entertainment spots on Mornings with Kerri-Anne.

Then out of the blue I was offered a job as a gossip columnist at the Sun Herald. I didn’t even do a single print subject at university. But I adapted my skills and stayed in that job for six years. I attended about 1500 A-list parties.  That job gave me some once in a lifetime experiences; I got to attend both of Oprah’s shows at the Opera House, I was in the audience of Ellen and a guest at the Emmys.

At the same time Channel Seven poached me to switch stations so I started doing entertainment spots on The Morning Show and Sunrise.

Meanwhile there were some major redundancies at Fairfax 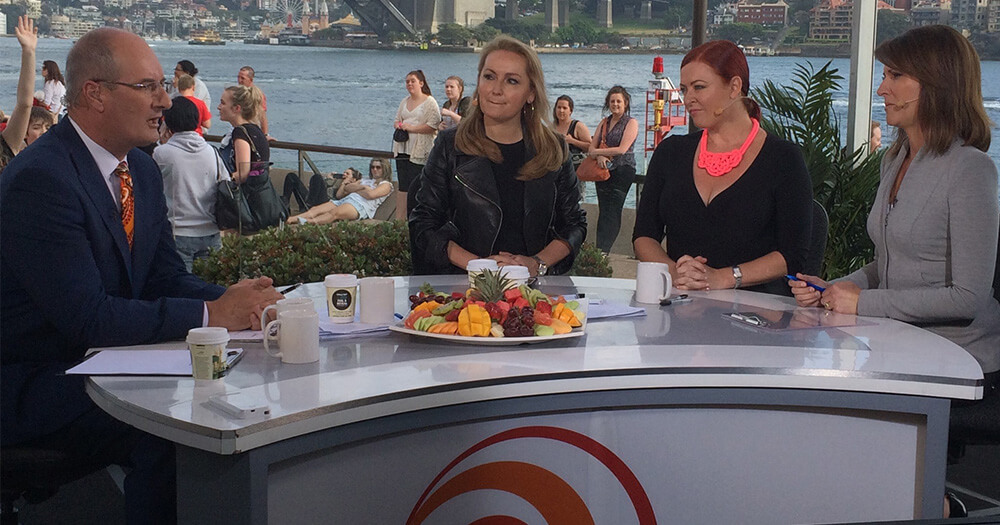 Never has “adapt or die” been more relevant or poignant. Grown men were crying at their desks because they wouldn’t adapt to the new digital-first world.

I became National editor of Life&Style – so I had to learn digital and learn it fast. It was baptism by fire and I shed more than a few tears. The thing with digital is there are no deadlines. Everything needs to go up NOW. It’s relentless and exhausting. But I learned those damn digital skills. Because I knew I had to. Not because I wanted to.

Then out of the blue I was offered a job as co-host of a new digital platform called HealthyMEtv. It was perfect, combining my love of presenting and my desire to be in the digital space.

After a year they didn’t renew my contract. I was shattered.

But I picked myself up

I got a job at mamamia.com.au as host and producer of Mamamia TV.

Native refers to sponsored content that doesn’t necessarily mention a brand but works around the theme of the product and sits comfortably with editorial stories.

As a journalist at first I wasn’t sure about native. But I had to adapt, as it is quickly becoming a favourite of advertisers. In America advertisers spent $US7.9 billion last year on native video, and in just five years it’s expected to grow to $US21 billion.

I saw a gap in the market so I decided to take a leap of faith. I quit my job and formed my own native video production company, ShellShocked Media.

I’m now presenting and producing videos for clients like Target, McGrath Foundation, Vagisil and Triumph. I’m co-hosting the controversial health web series Things You Can’t Talk About On TV, I’ve launched my own ShellShocked Media Hyvio channel (a competitor to YouTube) and I got headhunted to go back to Channel Nine.

Is this what I thought I’d be doing when I started in journalism 23 years ago? Hell no.

It’s a crazy ride with no set path to success, so forge your own path. And remember - adapt or die.

Inspired by Shelly's story? Learn more about forging your path in Writing and Communication here.