According to The Block host, Scott Cam, the Real Men Wear Pink campaign is about tradesmen, workers and women getting behind the National Breast Cancer Foundation’s awareness campaign.

“We all know that individually you can donate to a breast cancer cause,” he says, but now people can participate in the awareness month – with a bit of a twist. Scott is calling on people to be part of this campaign by ‘wearing pink with pride’ or nominating someone else in your workplace.

If you are ‘man enough’ to wear pink, nominate yourself and start fundraising today.

“An individual can start by buying a Bisley shirt and wearing it at work. By doing this you’ll be donating $3 from every pink shirt that’s bought to the foundation.”

But don’t just stop there, Scott says. “Encourage your workmates to get involved.  Each company can form their own little mini foundation,” he explains, with the idea being that you can have a “Real Men Wear Pink Day at work.”

He carries this thought a bit further, saying, “tradesmen are tough enough to cop it on the chin – if somebody bags a tradie for wearing pink – it doesn’t matter because they’re already tough – so the pink shirts aren’t gonna make them any less tough!”

Bisley Workwear has come up with a concept with the Breast Cancer Foundation and it’s a “cracking idea” according to Scott.

“Imagine the sort of the money that can be raised from Real Men Wear Pink Day if we can continue?” he asks. Scott is urging people to go to realmenwearpink.org.au and to buy a shirt to support this great cause. 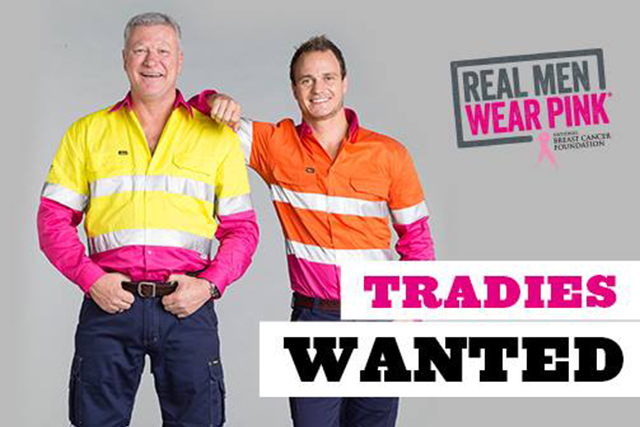 Many Aussie families have been touched by cancer.

Scott’s family has personally been touched. “My mother in-law has had breast cancer and my mother has had a couple of different cancers, but not breast cancer, specifically. Cancer’s everywhere and it affects the entire family. If your mother gets breast cancer or your sister or your wife, well, it’s a tragedy.  They will need support and we (as a society) need to find the cure.”

Open Colleges also spoke to Scott Cam about how he prepares himself for success. Many would know that prior to finding fame and fortune on TV – he was a hardworking carpenter for over 30 years. Here, Scott shares his business, motivation and career tips with us.

Is your “strong work ethic” the secret to your success?

“I certainly do believe I have a strong work ethic.  In fact, I think that’s probably the most important thing in life to have.”  Scott says that even from a young age, he’s tried to send the message to his own kids. “I’ve really instilled that idea into my own children over the years, it’s the focus on a strong work ethic that sets you apart.”

“(With my own kids and others) I’ve always talked about working hard. I’ve shown them where hard work can get you and the benefits of always turning up on time and getting the job done.  I’m never late.  I never asked for much.”

Those that work hardest – stand out in the end.

“I think that is the advantage for me in the (TV) job I’m in was the work ethic I already had from coming from a trade background into ‘TV land’ – they were probably a little bit surprised by that!”

“A strong work ethic gets you a long way in life, so I recommend it to all young people.  You’ll be a standout at work if you’re the one marching across the room, doing some hard work.”

Set a positive mindset and prepare for success.

“My number one tip — by a thousand percent— is a positive attitude!”

“I hate negativity and I always like everything to be positive and moving forward in a positive way.  Of course, working hard is a big one.  I love people that are hard workers and push themselves.”

The importance of being nice.

“I just like people that are nice!  You know the most important trait that I value in a work context is just ‘be a nice person’.  Think of others and you’ll go a long way.”

Scott’s three steps for setting and achieving a goal:

“Number one – it’s about being positive and having a great attitude towards your goal. That way, your goal will manifest itself through that positive attitude.”

“Number two – make sure you try to ‘fit in’ within your working environment, be positive and nice to people.”

“So those are the three main things I talk about – being positive, working hard, and being a nice person.”

5 graduation speeches that will inspire you