A work placement in animal care: chatting with Meranda and Rabea 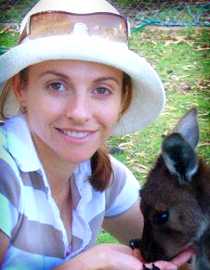 Meranda and Rabea have two major things in common. Number one, they share a love of animals, and number two, they are both studied of the Certificate III in Companion Animal Services at Open Colleges.

Even though they have been doing the same course at the same time, Rabea and Meranda live thousands of kilometres apart. Meranda Findlay is in Victor Harbour in South Australia, a city on the coast of the Fleurieu Peninsula, about 80 km south of Adelaide and Rabea Ford lives in Upwey in Victoria, about 32 kilometres from the CBD.

An early love of animals

Even though they live so far apart, both ladies are focused on learning all they can about animals in a professional context. Both have dreams and desires to make animal care their career and both have shared a love of animals since they were young.

“Growing up on a hobby farm I was exposed to a lot of animals of different varieties,” says Meranda, “On the farm we had geese, poultry, horses, pigs, dogs, cats and even lizards… I loved my lizards growing up as a kid. My dad is a very big snake lover. I grew up with animals all around me, so this passion was with me from a young age.”

Rabea tells a similar story, “I grew up with cats as a kid,” she explains. “Now I have two dogs, two guinea pigs and a cat.” An animal lover like Rabea, Meranda has a whopping 24 pets on her property, including a cat, two dogs, fish, hermit crabs, cockatiels, chooks and ducks. 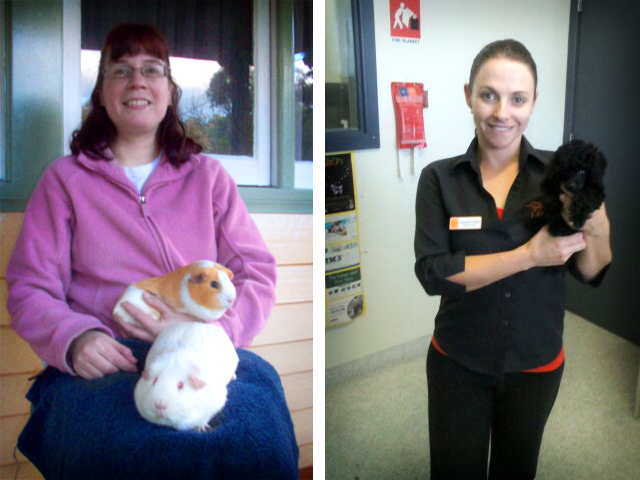 Both Open Colleges students have done previous work with animals. Meranda was a vet nurse, she worked in hospitality for 10 years but always had an underlying dream of wanting to work with animals. Rabea has volunteered at the RSPCA for about two and a half years and prior to starting her course and was successful at finding a work placement at a shelter called Animal Aid.

“Animal Aid is an animal shelter in Coldstream Victoria,” explains Rabea. “They have a variety of animals there; cats, dogs, rabbits and guinea pigs.” Although she got there in the end, finding a work placement took some time. “I persisted,” says Rabea on the challenges of finding a suitable placement, “I also spoke to somebody who said Animal Aid would take me on as a student.”

A structured work placement is a requirement of the ACM20117 Certificate II in Animal Studies. This is how students can gain the practical skills they will need to work in the animal care industry. “I have a list of skills logs that I have to demonstrate,” explains Rabea, “and they all have to get signed off. I have videos to do for most of the units as well.”

Online students like Meranda and Rabea do a set number of hours at a workplace that can help them to gain the skills they need. They work with an assessor and have tasks that they complete, including uploading videos of themselves doing things like washing and grooming their animals.

“Someone takes the video of me, doing my tasks,” explains Rabea. “I have done a bit here at home with a couple of my animals. The tasks show me giving my animals a bit of a brush and a pat or checking their nails and their eyes and things like that.” 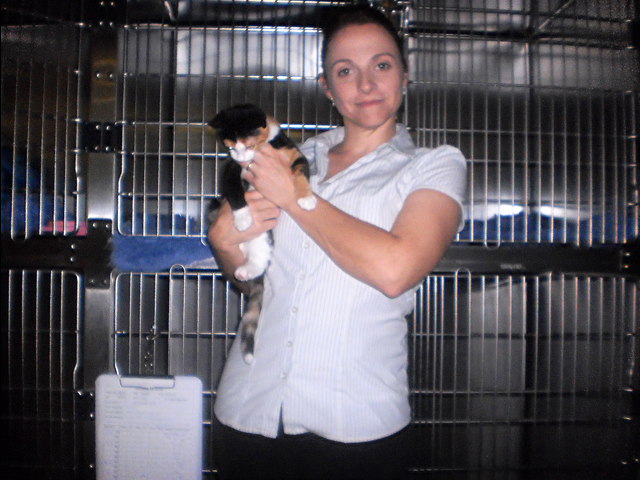 Meranda at her work placement at a veterinary hospital

Finding a work placement can be a challenge but Open Colleges  has a dedicated team of people working to assist students to find a suitable place. “I did my work placement at a veterinary hospital where I eventually gained employment,” says Meranda. “While I was there we did have a lot of people coming in asking for work experience. I guess I was lucky. I got in, showed my passion and my dedication. They were very happy with the work that I did and a after couple of months, they offered me a position. I think that if you show you are passionate and dedicated to what you are doing then you can go places.”

Rabea has similar hopes. “As a volunteer and a work placement student I plan to stay at Animal Aid,” she says. “And after that, once I have finished the course, what I will probably do is to see if there are any jobs available anywhere.”

Rabea has been doing her course online for the last six months and Meranda finished the whole certificate in just under a year and a half. “I found the course excellent,” the student explains. “I absolutely loved it. I learnt so much from it. And it was one of the most rewarding things that I’ve ever done.”

Meranda felt inspired right from the start of her course. “Basically, you just have to allocate the time and then you just follow the direction,” she says. “Just take it step by step and have lots of contact with your trainer. I think you also have to be very self-disciplined, you have to allocate the time, research as much as you can and ask for help wherever you can, particularly as you’re not in a class environment.” 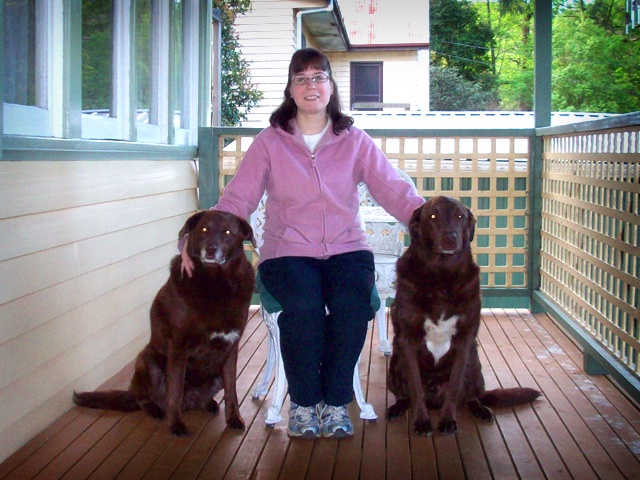 Rabea at her home with her Labrador cross Kelpie dogs, Cindy and Rusty

Success with the help of your trainer

Rabea says that she was able to contact her trainer when she had a question about the course. “It was a bit overwhelming in the beginning because I haven’t done anything online before. Now that I’m a little bit further into the course it’s a little bit easier. I contact my trainer perhaps two or three times a week.”

Meranda had a similar experience, explaining, “I had a lot of contact with my trainer who was wonderful. She got back to me really quickly. If I did get stuck on anything I would send her a message, usually within 24 hours she would get back to me. She was really kind and friendly and a wonderful trainer.”

Success with the help of other students

“You can gain that friendship with other students and help each other out. It makes it feel more like a class environment,” she says.

“I did have a couple of online friends who were at the same stage that I was. Some of them would contact me and say, ‘I don’t understand this question,’ and we would help each other out. By communicating with some of the other students, it really helped me out.”

Both Rabea and Meranda also enjoyed the flexibility and convenience of studying a course online. “The flexibility was fantastic,” says Meranda. “It worked around my kids, I could study when they were at school. It was really good to finally be able to do something with animals and not to have to travel to a classroom environment, or to Adelaide. I wouldn’t have been able to do it if it wasn’t online.”

These two students both have dreams to work in animal care in the future. “I would like to be working with animals or even educating people,” says Meranda. “I was hoping to find a role in a pet shop, educating people on how to look after their animals better. Obviously I still have a lot of education myself yet to go!” Meranda says she is interested in animal welfare and animal rights and wants to educate people on how to respect and care for their furry friends.

Rabea is “still working out which part of the animal shelter I like the best,” she says.  Her course is helping her to decide where she would like to take her skills. “I have found that so far grooming has been my favourite,” the student says. “The town where I live is actually quite small. There is a vet clinic down the road. There is a pet shop which is up the road and they also wash dogs.”

Recently, Meranda was able to put her new skills into practice when the shelter she worked for took in an injured native Australian echidna! “The echidna had just been hit by a car,” Meranda says. “We stitched up its mouth, it had a broken jaw. It was interesting to get to work with a wide variety of animals including wildlife.”

Down the line, Meranda says she might even want to work, “… at a wildlife park, or maybe even taking on another course as well.”

She says she found her course, “wonderful, absolutely wonderful. I loved it. It was challenging but it wasn’t hard. I found that I had lots of passion for it. The fact that there is a work placement is great as well – because you can do the theory but you need that practical to put the things that you’ve learnt into motion. I think that those two things went hand in hand and made the whole experience really good, very educational and rewarding.”

Rabea mentions that studying her certificate online was one of the best things about her Open Colleges course: “Yes,” she admits, “it’s been important that the course could fit around my life.”

If you are thinking of working in animal care, roles can be competitive. Gaining accredited, professional skills can be a great way to enhance your resume and demonstrate your passion for the industry. Like Rabea and Meranda, doing a work placement can be an essential way to work out where you want to take your career. Open Colleges has several animal care courses at different levels. Search animal studies courses here.

Words to Live By – Work