Like most of us, Nick loved cartoons as a kid. The difference is, Nick really loved cartoons. So much so, he decided to create his own, using his significant talents. Nick is from the beautiful area of Broadbeach Waters on the Gold Coast in Queensland and he says that as a child, he often felt inspired by the characters he saw on TV.

“As a child I grew up watching many cartoons,” says Nick. “They fuelled my creativity as I engaged myself in the colourful characters and stories that could only exist in a fictional universe.”

Nick says that he always had a vivid imagination. “Cartooning gave me the ability to pour my imagination onto paper for the world to see, and when an audience connects with it, it’s truly an amazing feeling like no other.”

To develop and explore his talents further, Nick decided to do an online course with Open Colleges, the Certificate in Freelance Cartooning and Illustrating.  The course took him roughly one year and six months to complete. Nick will graduate once his last assessment is graded. 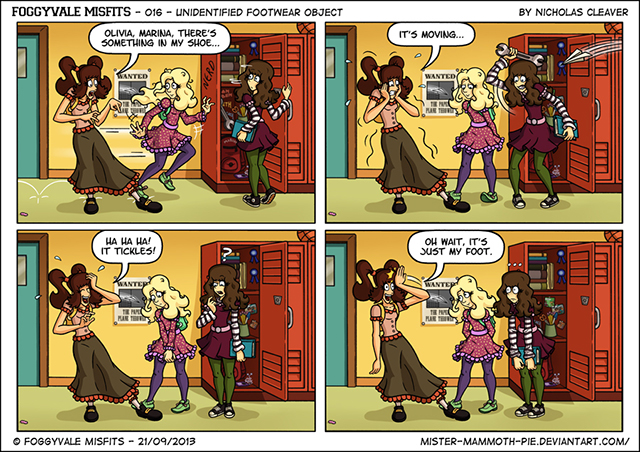 “I see cartooning as my only ‘real’ talent,” explains Nick, “so I’m very passionate about it and never take it for granted.”

The course Nick did is ideal for people who are considering a freelance career in commercial illustration or cartooning. It teaches students how to bring perspective and proportion to their illustrations and how to introduce style and text into their work. The course is also designed to bring a commercial edge to students’ created images, something that Nick’s cartoons certainly seem to have.

“I feel the business and marketing side of the course has been a great asset enabling me to approach potential clients with confidence,” says Nick. “In my spare time I like to watch sitcoms as inspiration for writing my comics. I also find dinosaurs, UFOs, aliens and space very fascinating; they make me wonder about the mysteries of life. There’s a lot of imagination flowing under my roof!”

Nick’s course is a self-paced one, as all Open Colleges’ courses are. “I found this certificate to be very flexible, enabling me to study around other commitments in my own time at my own pace in the comfort of my home.” The flexibility was a major benefit for Nick, he says.

“I could definitely rely on my trainer for the help I needed with my assessments. She always responded promptly to my enquiries. She also provided wonderful feedback.”

Nick explains a bit about how he creates the amazing images seen here. “As far as my artistic process goes,” explains Nick, “I start by drawing some quick storyboard sketches for a reference, then I sketch out some simple shapes, stick figures and action lines before drawing up the scenes in full detail with a 2H pencil.” 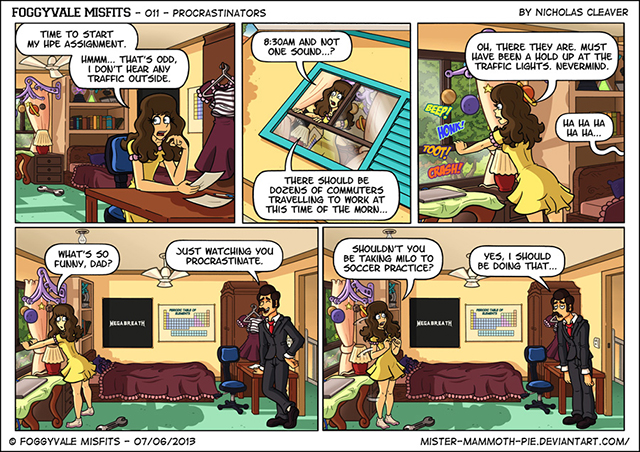 The work doesn’t end there. “Then I trace over those pencil lines with a black PaperMate Kilometrico ballpoint pen (nothing too fancy). After the drawing process, I scan them onto my laptop and make a few adjustments to the image in Photoshop before adding colour using Paint Tool SAI.”

Nick has big goals and aspirations for the future, as he explains. “I’ve always felt that syndicating an animated television series would be the final frontier in a cartoonist’s career, and it would be my dream job to turn my webcomic series, Foggyvale Misfits, into an animated sitcom as big as The Simpsons. It won’t be easy, but I remain optimistic!” he says.

Nick’s dreams don’t end there, either. “In five years’ time I would like to be publishing my comic strips in a magazine,” says Nick. “I have years of comics and ideas planned ahead for Foggyvale Misfits, so it would be great to put together a book of my collective works and sell them at comic conventions as well.”

Nick also credits the support he receives at home for his outstanding work. “I spend most of my time at home working on my art, surrounded by the loving support of my mother and sister.”

Nick mentions that he would suggest the Certificate in Freelance Cartooning and Illustrating to other potential cartooning stars. “The Open Colleges experience has been a very positive one for me and I would strongly recommend this course to anyone interested in cartooning and illustration.” 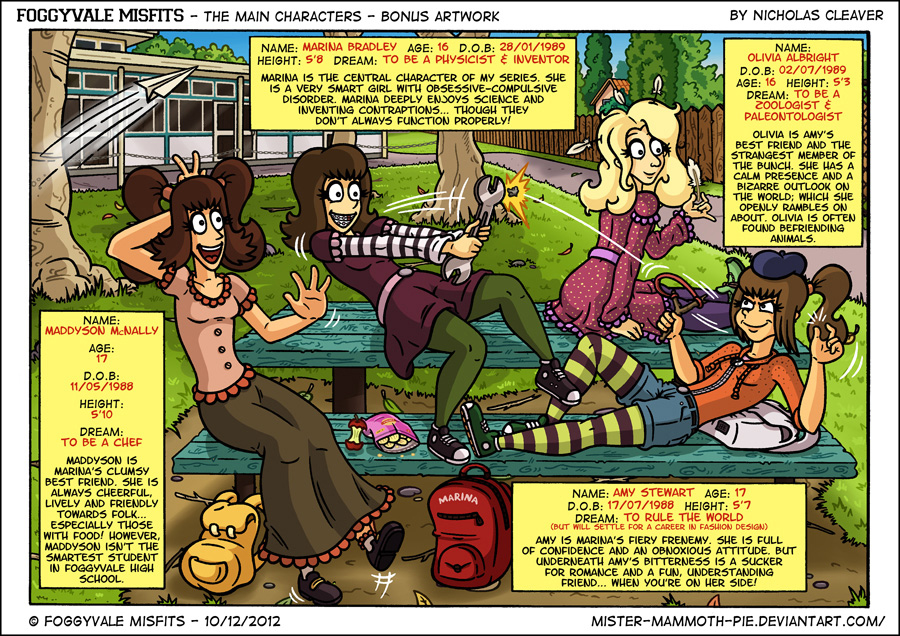 So, if you have ideas and talents that you want to bring to life, Open Colleges has a range of flexible, online courses that you can start any day of the year. You can even pay week by week and do your course while you continue on with your job, or other commitments. Have you seen the new Foundations in Graphic Design course, Aspire Step Engage? How about the Illustration & Drawing Made Easy Certificate or the CUV40311 Certificate IV in Design (specialising in Graphic Design)? If you’d like to check out the course Nick did, here’s the link to the Certificate in Freelance Cartooning and Illustrating. Good luck on your journey!