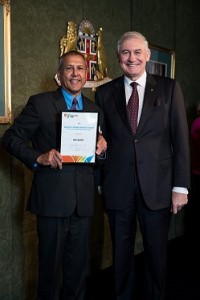 **Open Colleges does not currently offer any travel and tourism courses**
Matt Raj Mal, an Open Colleges tourism student from Terrigal, NSW, was recently nominated for and won a Minister’s tourism award. Here he shares his story with us.

For over 20 years, the New South Wales Minister for Tourism has been giving outstanding tourism students the chance to participate in the Minister’s Student Achiever Awards in Tourism. Each year there is a ceremony held where the awards are presented for people who have demonstrated consistent academic achievement, and who have the interpersonal attributes and personalities that indicate that they will be contributors to the hospitality industry in the state.

Paul Haddad, Open Colleges’ Learning and Assessment Manager, identified that one of Open Colleges’ students Matt Raj Mal might make a suitable candidate for the award and spoke with Matt’s trainer, Julie Hayes about potentially nominating him. Julie agreed that Matt would be an excellent candidate.

“I called him and interviewed him,” Julie says, “at which time I heard about the community service things he does and realised he was an excellent candidate.”

Matt Raj Mal is originally from Fiji – in fact he was even a City Councillor there many years ago. He now lives in Terrigal, New South Wales, or “God’s own country in Gosford” as he lovingly refers to it.

Matt has recently finished his online course the SIT40207 Certificate IV in Tourism which he completed in seven months.

“I think a Certificate IV level can sometimes take up to two years,” explains Matt, “so to complete it in seven months was great. Determination has a lot to do with it.”

Matt has always been interested in travel and the tourism industry. “Tourism is one of those mind-challenging subjects,” says Matt. “You can be sitting at home and seeing the world, particularly when you’re doing assignments, and you can discover, with others, what this world is all about.”

Last year, Matt found himself with some time between personal and professional projects and decided to investigate the tourism industry after doing some travel of his own.

“It’s a new thing that I took on because I just wanted something to do and I’d been to Cambodia, Vietnam and Laos,” Matt explains. Matt formed a connection with a Vietnamese local tour guide, who suggested that Matt might be able to represent him in Australia. 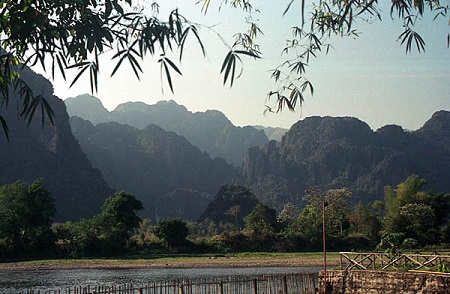 A picture of the Laos landscape in Vang Vieng

“So I thought,” Matt explains, “if I’m going to do something like that I might as well get to know the trade a little bit better. So I fished around online to find out what was available. I looked at TAFE and universities then I came across Open Colleges. I rang up and spoke to (the Enrolment Consultant) and next thing I knew, I had enrolled. I received my learning materials and seven months later – well – there you are!”

Matt was attracted to the flexibility of the course and the fact that it was self-paced, meaning students like Matt who want to complete their studies in their own time do not have to wait for the rest of the class to catch up.

“Education in any form is a triangular situation,” Matt explains. “You’ve got the student, you’ve got the support at home (your family) and then you’ve got the trainer or the teacher. When the three get together and do their parts, there will always be success at the end.”

Support for his online course was also essential to his achievement. Matt says that he quickly got the hang of how to study online.

“You are looking at four walls rather than somebody standing in front of a class,” Matt points out. “The first assignment you do, you start from scratch. But with a little bit of a push here and there from my trainer, I managed to find the right direction. I started doing my research and I took it as a personal challenge. I thought to myself, if I am doing this as self-directed learning, I may as well excel, or otherwise not do it!”

Matt’s trainer Julie, believes that it is this attitude that has been a contributing factor to his success, both in his course and for his award. “Matt is a deserving winner of the Minister’s Student Achiever Awards in Tourism and I give him a big round of congratulations. His enthusiasm and consistent effort made it a pleasure to work with him as his trainer.”

Matt was surprised at his initial nomination, saying, “The recent award was unexpected. My phone rang and Julie asked my permission to nominate me for this award that was coming up. After a brief discussion about it, I said sure, why not?”

Years ago, when Matt was serving as a City Councillor in Fiji, he even met Queen Elizabeth II.

“I was a bit tongue-tied before I was presented to her,” says Matt. “She stood in front of me and protocol says that a royal must speak to you first, before you initiate conversation. Because I was the youngest Councillor she said one magic sentence which really opened me up. She said, ‘So, are you the junior here?’ and she’s so perceptive and after that I couldn’t stop talking.”

This Open Colleges student has a history of community work and achievements. He was president of the Ettalong and Umina Lions Club and served in Surf Life Saving Australia for ten years. He also spent a period as a director at Central Coast Football.

Matt is quite clear about his dreams for the future, too. “What I would sincerely like to do is a two-way tour operation in Vietnam, Cambodia and Laos,” says Matt. “I think the people of Vietnam travel a lot and I am laying the ground work to get some more tourism happening in New South Wales as well.”

This tourism student has spent a lot of time researching the potential avenues for tourism in certain regions. “When you research back into the travel habits of the South-East Asian region you can see that there was a lot of Japanese tourism in the Gold Coast in the 60s,” Matt explains.

“Japanese tourism was responsible for driving a lot of the infrastructure in the city. Then after this wave of Japanese tourism, we saw a wave of Chinese tourism. Now there are countries like India setting up these tourism opportunities with Australia. I think the next big tourism wave within the next ten years could be from Vietnamese travellers. Countries that have been set back economically for a while are now coming up and have more dollars to spend on travel.”

“I had a great chat with a couple of students, just to encourage them. I responded to them, because I knew how they felt,” says Matt. “I said, ‘carry on, keep it up!’ When you know that at the end of the day if you really get stuck you can always contact your trainer, knowing that someone is out there who will respond to your queries helps a great deal.”

This award winner also wants to credit the support he received at home to his success. “At home I had the space,” explains Matt, “and I was given the opportunity to spend a lot of time doing my research so I set myself a timetable and worked from my office. At times I was up until 4 or 5 in the morning so I was definitely burning the midnight oil! But I really was focused on finishing my course.”

What are the career options in Travel & Tourism?