The Truth about Procrastination – And How to Beat It

By Marianne Stenger February 15th, 2015 No Comments Other 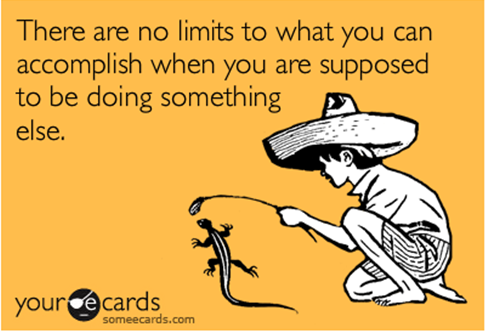 Do you ever get the feeling that everything conspires against you the minute you have a deadline on the horizon?

Facebook posts are unusually interesting; the kids need a ride to school, although they hate being dropped off; and just about anything from going for a run to cleaning the toilet suddenly seems more enticing than the report that’s meant to be handed in by the end of the day.

Procrastination tends to be shrugged off as nothing more than a lack of time management skills, but new research suggests that the real problem might be slightly more complicated.

Chronic procrastination, which is thought to affect around 20% of the population, can be defined as the voluntary delay of an important task, even when we know we’ll have to pay the price later on.

Studies show that such chronic procrastination can be the cause of a host of problems, from lower grades to higher stress levels to poor health, and even substance abuse.

One study indicates that while putting things off does provide temporary relief from stress, it only exacerbates the problem in the long-term.

The researchers found that chronic procrastinators got significantly lower grades, and were more likely to justify their delaying tactics by making excuses like “I work best under pressure.”

“The results show that procrastinators don’t work better under pressure, but it may be the only way they work,” said Bruce Tuckman, author of the study and professor of education at Ohio State University.

“They don’t have any idea how well they might do if they didn’t procrastinate.”

“To tell the chronic procrastinator to just do it would be like saying to a clinically depressed person, cheer up,” noted Joseph Ferrari, professor of psychology at DePaul University

He explains that procrastinators are somewhat selective in their rationalisations, and often choose the ones that make it seem like putting off their assignment or task is going to be a good thing for them.

“Procrastinators say they are waiting for the best time to do an assignment, but what they are really waiting for is such a high level of anxiety that it forces them to do something,” he said.

Another interesting finding is that chronic procrastinators score lower on tests of self-regulation, which is the ability to control one’s own actions to finish a task.

Procrastinators also tend to actively look for distractions and are especially fond of things that don’t require too much commitment, such as repeatedly checking their email or scrolling through news feeds on Twitter or Facebook.

Researchers believe that these distractions are used to regulate certain emotions, such as a fear of failure; procrastinators would rather have people think they didn’t put in enough effort than think they lack the capabilities to complete a task.

This was shown in an experiment with students who were asked to complete a math puzzle. Some were told that the puzzle would measure their cognitive abilities, while others were told that it was simply a meaningless and fun exercise.

Before starting the test, the students were given a period of time during which they could either practice for the test, or pass the time by playing games.

The researchers found that the chronic procrastinators delayed their practice when they thought the puzzle was designed to evaluate their cognitive abilities, but not when they were told that it was a meaningless exercise.

But if this is the case, what are some possible ways of preventing these unwanted delays?

Researchers believe that these distractions are used to regulate certain emotions, such as a fear of failure

“To tell the chronic procrastinator to just do it would be like saying to a clinically depressed person, cheer up,” noted Joseph Ferrari, professor of psychology at DePaul University and leading international researcher in the study of procrastination.

Some practical ways to counter procrastination could include breaking tasks up into smaller and more manageable assignments or setting personal deadline, but researchers note that addressing the emotional aspects of procrastination can be more difficult.

Blocking access to distractions, for example, by going to a quiet place or switching off your phone while studying, can help, but this too requires self-regulation, which procrastinators lack in the first place.

Some research suggests that finding something positive or worthwhile about the task itself may fill the need to find short-term mood fixes and can help procrastinators focus on the here and now.

Ferrari believes that shifting the focus from punishing lateness to rewarding the early bird can also help procrastinators to see the positive side of getting things done on time, or better yet, early.