The Psychology of Social Media: Can We Leverage It For Learning? 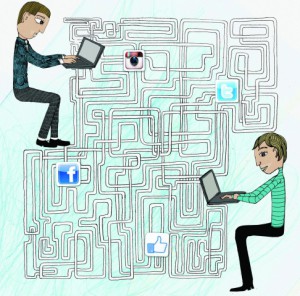 Why is social media so addictive? In a word, dopamine. But not the way you think. Traditionally, we think of dopamine as it relates to the “pleasure centre” of the brain. When you enjoy something or receive a reward of some kind, it’s dopamine that makes you feel good. At least, that’s what we’ve thought since 1958, when dopamine was first discovered by Arvid Carlsson and Nils-Ake Hillarp at the National Heart Institute of Sweden.

But the latest research says it’s not about experiencing pleasure at all. It’s about seeking it. And this could have interesting implications for educational practice.

According to Dr. Kent Berridge of the University of Michigan, dopamine is much more aligned with anticipation and motivation than with satisfaction. It causes us to want, desire, seek out, and search. It increases our general level of arousal and our goal-directed behavior. It fuels our desire to “want” food, sex, money or more intrinsic rewards like self-satisfaction and a sense of purpose.

An entirely different system, called the opoid system, produces the experience of pleasure and “liking.”

“From an evolutionary stand-point this is critical,” says psychologist Susan Weinschenk. “The dopamine-seeking system keeps us motivated to move through our world, learn, and survive. It’s not just about physical needs… but also about abstract concepts. Dopamine makes us curious about ideas and fuels our searching for information.”

Pleasure certainly plays a role in human motivation, nicely illustrated by our obsession with social media: If it’s the “wanting” system that propels us to scroll endlessly on Facebook and Twitter, it’s the “liking” system that responds to the instant gratification of instant messages, texts, and information access. But research shows that the brain actually shows more stimulation and activity when we are anticipating a reward than when we actually receive it. If you destroy dopamine neurons in rats, for example, they can walk, chew, and swallow, but will starve to death when food is right next to them. They have lost the desire to go get the food.

More and more, research is showing us that, although wanting and liking are related, the dopamine system doesn’t have satiety built in. You can have enough pleasure, but you can’t can’t have enough anticipation of that pleasure.

“Dopamine is also stimulated by unpredictability. When something happens that is not exactly predictable, that stimulates the dopamine system.” And social media is the perfect catalyst for this. “Our emails and tweets and texts show up, but we don’t know exactly when they will or whom they will be from. It’s unpredictable. This is exactly what stimulates the dopamine system. It’s the same system at work for gambling and slot machines.”

When you hear the “ding” that you have a text or see that little red notification at the top of your Facebook page, it enhances the addictive effect of the medium.

“The dopamine system is especially sensitive to “cues” that a reward is coming. If there is a small, specific cue that signifies that something is going to happen, that sets off our dopamine system.”

The question is, if seeking behaviour is such a huge part of human motivation, how can we better incorporate it into our educational systems? Imagine reaching a point where students anticipate math homework just as eagerly as they anticipate posting a status. Now that we know more about the way rewards work, it’s time to shift our instruction accordingly.

Anticipating Learning Instead of ‘Likes’

Anticipation, not pleasure, is the ultimate drug. But does it matter what we’re anticipating? Does it have to be physical, like sleep, or emotional, like the social belonging we seek from Facebook “likes”?

In 2009, scientists at the National Eye Institute found that we obsess over cognitive rewards, too, like the expectation of receiving information.

In their experiment, Ethan Bromberg-Martin and Okihide Hikosaka placed monkeys in front of a computer screen and trained them to perform a saccade task, in which they learned to direct their gaze at specific areas. The monkeys were first given the option of choosing between one of two colored targets. One of these targets would give the monkey advance information about its future reward. The advance information came in the form of visual cues, one representing a large reward and the other a small reward. Choosing the other initial colored target revealed cues that were randomly associated with reward size, thus possessing no informative value. After only a few days of training, the monkeys showed a clear preference for choosing the informative colored target.

Like high-school seniors waiting on their SAT results, the monkeys wanted to know, and they wanted to know right now. The trick is to replicate this seeking behaviour in an actual educational setting.

There are plenty of resources out there to help teachers “increase dopamine levels” in students, but most of them are based on outdated beliefs about dopamine and pleasure. What we need are more strategies designed to enhance anticipation, not enjoyment.

Research in fields besides social media confirm this idea. For example, we now know that anticipation is at the heart of musical experience. A Stanford research team found that peak brain activity happens not while we’re hearing notes, but rather between musical movements, when anticipation is highest. Even people who aren’t musically inclined are actively engaged, at least subconsciously, in tracking the ongoing development of a musical piece, and forming predictions about what will come next.

So what can we do to boost the anticipation of learning? Below we offer a few pointers.

1. Believe the good things you hear about video games.

When it comes to heightening anticipation, video games reign supreme. Students can look forward to earning points, solving problems, and making it to multiple levels. Look for programs that feature depth and variety of content, like the old classic Where In Time Is Carmen Sandiego?

If there’s an exciting unit coming up next month, mention it. Get students thinking about it and they might just find the mystery appealing. They’ll appreciate the material you’re covering now, too, because they know it will lead to something.

The pop quiz is a cheap trick to inspire fear in students. Why are we trying to frighten students into learning instead of exciting them with the prospect of it? Try a pop quiz “show,” where students get to sit in the hot-seat and answer questions or compete against other teams.

Half the appeal of social media is the opportunity to present yourself to others, and anticipating their reactions. So let each student have their own personal profile page for others to peruse. Students can include photos, a few lines about their course goals and backgrounds, perceived strengths and weaknesses in the subject, favourite quotes, and ongoing posts with links to resources they find helpful. You might also try installing a “like” or “favourite” button into your online course platform so students can express themselves and anticipate feedback from others.

5. Talk about the value of “feeling accomplished.”

We read books because we enjoy the moment-to-moment experience of it, but also because it’s fun to snap another one shut and cross it off the list. That’s reward-driven anticipation at its finest. Let’s introduce students to the concept of fulfilling a larger goal by focusing on a smaller one first.

The dopamine system loves small cues. Think of a few very simple ways to signify a fun upcoming assignment, like using colour coded font or wearing a different tie each time you give a lecture on a different topic. To keep students attentive during a long lecture, use music to organise and define the concepts you’re covering. Assign different topics their own song or part of a song, and play it briefly before you start talking. They’ll know what’s coming next time and it may even help them retain the material better through association.

7. Let students judge each other.

The advanced creative writing workshops at my university were very popular, selective, and always had high attendance. Why? Because we got to judge each other’s work. People love expressing their “likes” and “dislikes” and eagerly awaiting the opinions of others, so let’s give them what they want. Give your students as many opportunities as possible to assess each other’s work and offer constructive feedback.

8. Play up the visual element.

We look forward to not just reading but also seeing updates from our friends on Facebook, Twitter, and Instagram. Social media has made it even clearer that we are all visual learners, so be sure to incorporate lots of images into your lessons. And I’m not just talking visual aids or clip art. Place images at the centre of your lessons and teach around them. Every teacher should be looking at the visual literacy gained through social media and applying it to academic subjects as well.

It may seem counterproductive, but it’s not. Technology has not made us dumber; it’s simply changed the way we obtain and use information. Now that we can instantly look up the answers to our questions on Google, we have more time to analyse, evaluate, and make connections. As an eduactor, you should encourage that information-seeking urge in your students as much as possible. Besides, it’s no longer what you know, but what you can do with what you know. That’s where the lesson should lead.

10. Present every lesson as a privilege.

Students know they have to learn. But they don’t know that they “get” to learn. Even teachers are guilty of passively relaying information from a lesson book without thinking about how it will be received. We need to treat learning as an opportunity, not a given. That’s what breeds anticipation.

Learning is one of the greatest rewards we have. It’s a shame that social phenomena like Facebook and Twitter continue to be seen as separate from–and worse, distractions to– a ‘real’ education. We can learn a lot about learning from the way people use these tools. Let’s keep this in mind as we move forward in the Age of EdTech.