The Power of "I Don't Know" 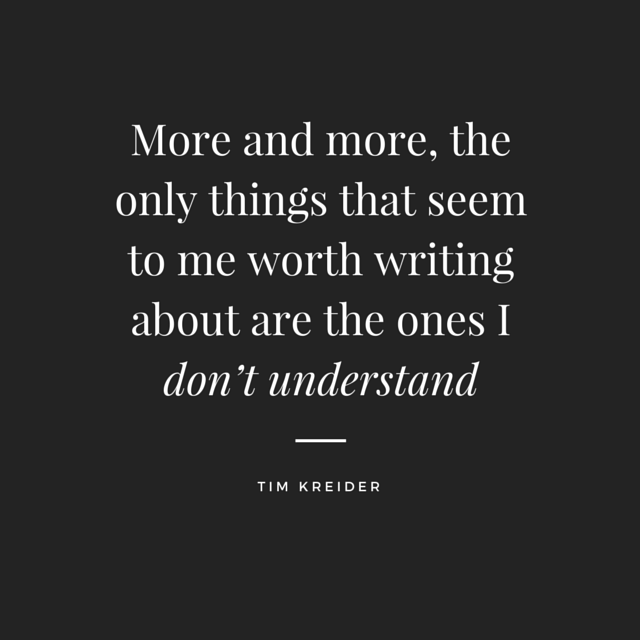 We have a real problem with intellectual humility in this country. Or should I say, lack thereof. It’s frowned upon to be uncertain, to lack expertise, to meet a question with another question. If we don’t know the answer to something right away, it’s viewed as a weakness rather than a strength. And sure, this may be the case if a question requires simple arithmetic or rote memorisation, but it’s not the case when questions dig deeper.

In a 2013 interview with National Public Radio, Leah Hager Cohen, author of I Don’t Know: In Praise of Admitting Ignorance (Except When You Shouldn’t), said, “This year’s graduating high school class will be the first generation to have grown up entirely under the No Child Left Behind Act, so this is an entire generation of kids that’s been raised in an educational environment where there’s a premium on knowing the right answer, being able to fill in the correct oval on a test. I worry that we may not be teaching enough the value of experimentation and failure and risk-taking and the process of inquiry.”

Michel de Montaigne, widely considered the first essayist, suggested that being aware of your own intellectual insecurity at least puts you one up on those who aren’t. “But,” he conceded, “I don’t know.”

“It’s that implicit ‘I don’t know’ at the heart of Montaigne’s essays–his frankness about being a foolish, flawed and biased human being–that [scholars] think has endeared him to centuries of readers and exasperated more plodding, systematic philosophers,” says Tim Kreider, author of We Learn Nothing.

But most of us don’t want to be endearing; we want to be right. We want the solemn respect that comes from knowing a lot. We want to be the kings and queens of trivia, the human encyclopedia of our social circle, the person other people call “smart.”

What’s so great about not knowing?

For one thing, we open ourselves up to deeper learning when we admit we don’t know. A pedagogical method called Socratic questioning encourages teachers to put questions before answers in order to promote students’ critical thinking. It includes, for example, the following exercises/questions:

In short, we need students to think about their own thinking, whether they believe they’re right or not.

Along with Socrates, Thomas Aquinas was known to constantly test his thinking by systematically anticipating, considering, and answering every criticism of his ideas that he could conceive of. In so doing, he inspired others to appreciate a kind of systematic cross-examination of the self, which helped ensure rational and objective thinking.

In the 13th century, when Aquinas was a Master at the University of Paris, the standard method of critical thinking and knowledge development was disputation. This was a method of debating that required opponents in a debate to present not only their arguments in support of their point of view, but also arguments which opposed their point of view. Designed to prevent personal bias, this method is still used in some educational circles today.

On thinking more carefully, Kreider says: “The more someone knows about any given subject, the likelier he is to include a lot of boring, hard-to-follow caveats, complicating factors and exceptions in discussing it. Which is why, for example, climatologists, who have actually studied the data and know how to interpret it tend to carefully hedge their claims, declining to assert any direct causality or make predictions, whereas professional obfuscators will confidently assure you that global warming is a lot of alarmist hooey.”

In other words, if you want to look “smart” (or actually be smart), don’t act so certain all the time.

Another benefit of saying, “I don’t know” is that it represents a call to action. You’re more likely to learn something if you realise you need to conduct a little research.

“One way to give power to an ‘I don’t know’ attitude is to teach internet literacy early and often, giving students the power to seek out answers themselves,” says Heather Wolpert-Gawron, award-winning middle school teacher, blogger, and author of Writing Behind Every Door: Teaching Common Core Writing in the Content Areas. That way, “I don’t know” can really mean, “Wait! Let me find out!” Wolpert-Gawron adds: “The phrase, ‘I don’t know’ is one that both honours confusion and stimulates the process of clearing it up.”

On the flip side, when you let someone teach you something by admitting you don’t know the answer, you earn their respect and boost their academic confidence.

“Think of that student…that tells you something, to which you respond, ‘I did not know that! Thanks for sharing that with me,'” says educator George Couros. “Once they realise they were able to teach something new to the person of ‘authority’ in the room, it creates a much more powerful dynamic in the relationship. Adults are no different, especially when they feel they can teach the ‘expert’ something that they didn’t know. To gain trust, we have to give up power.”

So we’re starting to see that being smart isn’t all about being right. It’s about being curious. Let’s take a look at several ways to convey the value of “I don’t know” to your students and get them saying it on their own:

If you don’t know the answer, you’re about to learn something new. That’s never a bad thing. Pretending you know the answer, on the other hand, ensures that you never learn the actual truth.

Voluntarily learning from others is one of the best way to build relationships. People like to teach other people, so indulge your peer or colleague the next time you don’t know the answer and they do.

Actively realising you don’t know the answer, and planning to do something about it, is one of the keys to successful self-driven learning. Saying “I don’t know” should invoke interest, not indifference.

When one person admits they don’t know, others feel more at ease to speak up. Discussions are great for deeper learning because they provide objective points of view, so take advantage of the opportunity to engage your peers.

Immediate answers close up our minds to further possibilities. When we kep our minds shut tight, we end up making a lot of assumptions about life, many of which could be dead wrong. Let the power of “I don’t know” keep you in line with the truth.

When we say “I don’t know,” we don’t necessarily mean we have no idea; often we mean we’re not one-hundred percent sure. When we’re unsure whether we know or not, we spend more mental effort to try to figure it out. That’s why it’s important to admit to ourselves when we aren’t certain–it gets us thinking harder than if we assume we do or don’t know.

Stop trying to be right all the time; it’s not the goal of an education. When we know our own intellectual limits, we can increase the efficiency of our learning and save ourselves from blind overconfidence.

When you admit you don’t know to someone else, they’ll find it easier to trust you when you do. Alternatively, if you make a habit of pretending to know and end up being wrong too many times, your credibility will suffer.

The deeper you plumb an issue for answers, the closer you get to that kernel of truth. It takes effort to go beyond the shallow waters, where you seem to have arrived at a solution, and realise you’ve only just scratched the surface.

Here we are, in an era where more information is floating around than ever before, some reliable and some not. How do any of us really presume to know what we know?

“Whenever someone writes to me politely to task over some unfair generalisation, self-contradiction or unexamined blind spot, my riposte is usually something along the lines of: ‘Hm, yeah, I guess you have a point there,'” Kreider says. “I don’t always agree with me; I certainly don’t expect everyone else to. Being treated as some sort of authority, not only by TV and radio hosts but by people who write to me for advice, is more alarming than flattering; it makes me wonder whether all the alleged sages I’ve ever admired, from Lao Tsu to Marcus Aurelius, were big fat fakes like me. I suppose it’s possible that all those other columnists and talking heads really do know whereof they speak and I’m the only who doesn’t know enough to fake it. But I have my doubts.”

Being an expert, then, means you can admit when you have no expertise. And these moments are often the most enriching.

Kreider again: “Real life, in my experience, is not rife with epiphanies, let alone lessons; what little we learn tends to come exactly too late, gets contradicted by the next blunder, or is immediately forgotten and has to be learned all over again. More and more, the only things that seem to me worth writing about are the ones I don’t understand.”