Teaching Metacognition: Insight Into How Your Students Think Is Key To High Achievement In All Domains 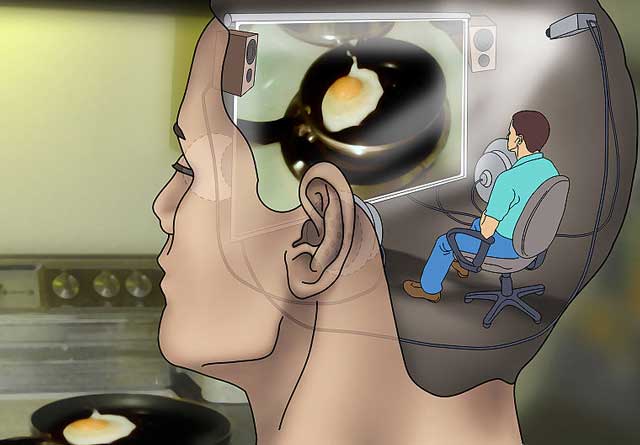 A few years ago, I came across some interesting research by cognitive psychologist Ronald T. Kellogg. He claimed that the mark of an expert writer is not years of practice or a hefty vocabulary, but rather an awareness of one’s audience. This made sense to me, and I wondered if it were true in other disciplines as well.

As it turns out, the difference between novices and experts in a wide variety of fields can be attributed to a single trait, the trait that prompts great writers to consider their readers: the ability to step outside of yourself.

The defining characteristic of intelligent novices seemed to be an ability to control and monitor their own thought processes. This suggested that there was more to expert performance than just domain-specific knowledge and skills (though many of us still hold this mistaken view today).

“People tend to be blissfully unaware of their incompetence,” lacking “insight about deficiencies in their intellectual and social skills.” They identified this pattern across domains—from test-taking, writing grammatically, thinking logically, to recognising humour.

Cognitive scientists called this new element of expert performance metacognition–the ability to think about thinking, to be consciously aware of oneself as a problem solver, and to monitor and control one’s mental processing.

Metacognitive practices help us become aware of their strengths and weaknesses as learners, writers, readers, test-takers, group members, etc. A key element is recognising the limit of one’s knowledge or ability and then figuring out how to expand that knowledge or extend the ability. Those who know their strengths and weaknesses in these areas will be more likely to “actively monitor their learning strategies and resources and assess their readiness for particular tasks and performances.”

The absence of metacognition connects to the research by Dunning, Johnson, Ehrlinger, and Kruger on “Why People Fail to Recognise Their Own Incompetence” (2003). They found that “people tend to be blissfully unaware of their incompetence,” lacking “insight about deficiencies in their intellectual and social skills.”

They identified this pattern across domains—from test-taking, writing grammatically, thinking logically, to recognising humour, to hunters’ knowledge about firearms and medical lab technicians’ knowledge of medical terminology and problem-solving skills. In short, “if people lack the skills to produce correct answers, they are also cursed with an inability to know when their answers, or anyone else’s, are right or wrong. This research underscores the importance of metacognition in expert performance across all fields.”

There is now an undeniably solid body of research supporting the role of metacognitive thinking in becoming an expert.

“Metacognition is the underlying thought process of experts that enables them to learn from experience and ultimately to act on their intuition,” writes Mark E. Quirk, E.d.D., in Intuition and Metacognition in Medical Education: Keys to Developing Expertise (2006).

Feeling sceptical? Below is just a brief glimpse of the evidence backing metacognition in nine different fields. 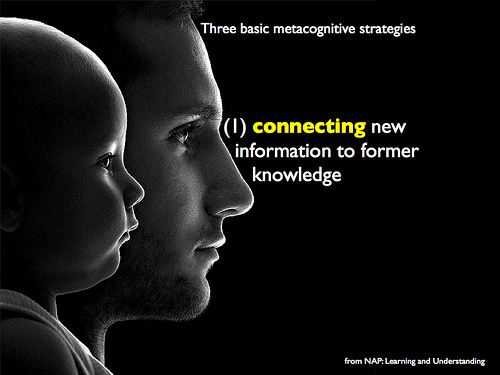 Researchers at Aksaray University in Turkey conducted a study in 2011 to determine the relationship between fifth-grade students’ metacognitive skills and their achievement in mathematics. A total of 242 students from six different institutions participated in the study. A Turkish version of the Metacognitive Knowledge and Skills Assessment was used to measure metacognitive knowledge and skills.

A study published in the Scandinavian Journal of Educational Research focuses on how expert and novice computer programmers compare in terms of their metacognitive knowledge and task-specific awareness. Novices and experts were individually presented an updating program, written in COBOL language.

The data about metacognition was mainly derived from subjects’ interviews and thinking-aloud protocols. Results showed that experts were superior to the novices in their metacognitive knowledge of the program task and of the working strategies. Experts had a definite conception about an ideal working strategy, and they also seemed to work in accordance with this. Furthermore, experts had more adequate awareness of their work than novices.

The authors conclude that “experts have a close interaction between metacognitive knowledge, task-specific awareness, and cognitive monitoring. Among novices, this kind of relationship could not be found.”

Experts have a close interaction between metacognitive knowledge, task-specific awareness, and cognitive monitoring. Among novices, this kind of relationship could not be found

Their verbalisations were audio recorded, transcribed, and coded

Even in the medical sciences, researchers have begun to differentiate the expert from the novice in specific competency areas other than solving cognitive problems. In his article Quirk writes: “The expert ‘medical communicator,’ for example, would rely on interpersonal expertise to elicit the patient’s and adjust patient education to fit the patient’s needs and values… In essence, the novice medical student learns to think, and the expert student learns to think about his or her thinking.”

He adds: “Metacognition is a critical feature of the emerging paradigm for clinical learning that shifts the emphasis in medical education from application of knowledge learned [in class] to preparing students to effectively practice medicine and learn from their experiences.” 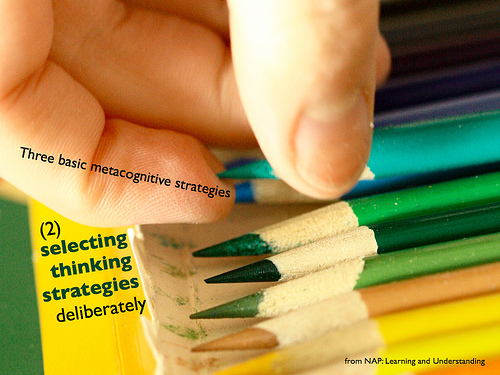 Parsons (1987) proposed five developmental stages leading from childhood to an art expert state. The first two stages involve concentration on personal preference, depicted content, and colour. The third stage is characterised by concentration on emotional experiences. Finally, the fourth and fifth stages require art-specific training and experience, and are characterised by style and form as well as critical reflection of the art historical concepts applied.

When Winston and Cupchik (1992) compared experts’ and non-experts’ reactions to high art versus popular art, they found that non-experts often justified preference judgments with reference to personal feelings (“this one makes me feel happier”), whereas experts gave more reasons related to style, such as “more dynamic.”

Augustin and Leder (2006) tested groups of art history and psychology students at the University of Vienna and found similar results. Psychology students tended to label works of art as “pleasant/nonthreatening” versus “negative/threatening,” whereas art history students chose labels such as “spontaneous,” “expressive,” or “intuitive.” Here’s what the authors had to say on their finding: “It might be reasonable to infer that for experts, emotions are more important with respect to the artist and the act of creation of the work.”

According to more than one expert on the topic, the difference between novice and expert writers is a consistent awareness of one’s audience. Kellogg (2008) identified the most advanced level of writing mastery as “knowledge-crafting,” wherein the writer shapes what to say and how to say it with the potential reader fully in mind. The writer tries to anticipate in different ways how the reader might interpret the text, and takes these into account while revising.

As Sommers (1980) observed in journalists, editors, and academics, “experienced adult writers imagine a reader (reading their product) whose existence and whose expectations influence their revision process.”

In one of her early studies of expert versus novice writers, Sommers found that professional writers routinely and spontaneously revise their texts extensively and globally, making deep structural changes. They express concern for the “form or shape of their argument” as well as “a concern for their readership.” By contrast, college freshmen made changes primarily in vocabulary used to express their thoughts.

In a 2001 study published in the British Journal of Music Education, twenty-two professional musicians and fifty-five novices were interviewed about their practicing. The novices were also tape-recorded learning and performing a short piece. The professional musicians demonstrated extensive metacognition in relation to their preparations for performance encompassing technical matters, interpretation, and issues relating to learning itself, e.g. concentration, planning, monitoring and evaluation.

In 2011, Bathgate et al wrote, “Many [musical] experts employ highly tailored practice involving metacognitive processes, but novices rarely engage in frequent and explicit metacognitive strategies during practice. As a result, novice progress may be impeded through repetition of systematic errors and ineffective techniques. Our study provides evidence of the effectiveness of teaching metacognition to novice music students through weekly lessons.”

In their study, thirty-five adolescent students of six instructors were randomly assigned to metacognitive focus or existing practice teaching conditions. Students receiving metacognitive teaching achieved higher performance ratings when compared with students receiving control instruction, even though practice time did not vary between groups. These results suggest that having students explicitly verbalise and reflect on their learning process produces more efficient practice and greater end performance. 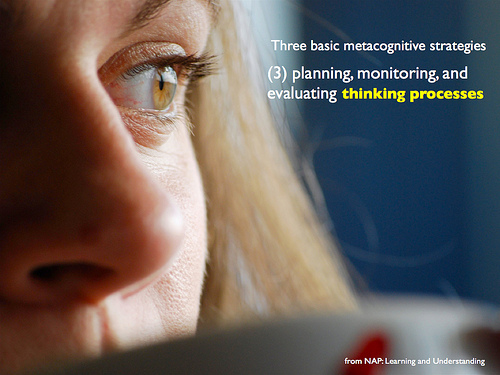 The Journal of Teacher Education documents a study conducted by researchers at Marymount University on the main difference between novice and expert teachers. The thinking and decision making of expert and novice teachers were compared before, during, and after teaching. The novices were five student teachers, and the experts were their five cooperating teachers in a suburban elementary school. The expert teachers thought about learning from the perspective of the student and performed a cognitive analysis of each learning task during planning, which they adapted to the needs of students during teaching.

In contrast, novices used specific lesson objectives to form structured lesson plans that they did not adapt to meet student needs during teaching.

A study led by a team at University at Albany, State University of New York found that beginning teachers typically focus on themselves as teachers, not on student learning as do more experienced teachers.

A similar study led by a team at University at Albany, State University of New York found that beginning teachers typically focus on themselves as teachers, not on student learning as do more experienced teachers. “This shortsighted view of teaching is explicit in novice teacher comments regarding technologies which, in the novice discourse, get cast as being in primary relationship with teachers and their plans, not the learners and their learning,” the authors write.

“This is also in keeping with teacher education research that found that novice teachers reflect on and analyse their craft on intuitive rather than empirical grounds as do experts (Reynolds, 1992).”

In the 1980s, John Bransford, an expert cognitive psychologist, tried to learn physics from a textbook with the help of an expert physicist. He kept a diary of his learning experiences and recorded the skills and strategies most useful to him (Brown et al. 1983). Among the things he listed were

These are all metacognitive skills; they all involve awareness and control of the learning problem that Bransford was trying to solve. Bransford might have learned these skills originally in one domain (cognitive psychology), but he could apply them as a novice when trying to learn a second domain (physics).

This self-experiment led Bransford and his colleagues to examine in a more controlled way the differences between expert and less-skilled learners. They found that the behavior of intelligent novices contrasted markedly with that of the less skilled. Intelligent novices used many of the same strategies Bransford had used to learn physics. Less-skilled learners used few, if any, of them.

The less-skilled did not always appreciate the difference between memorisation and comprehension and seemed to be unaware that different learning strategies should be used in each case. These students were less likely to notice whether texts were easy or difficult, and thus were less able to adjust their strategies and their study time accordingly.

Less-able learners were also unlikely to use self-tests and self-questioning as sources of feedback to correct misconceptions and inappropriate learning strategies.