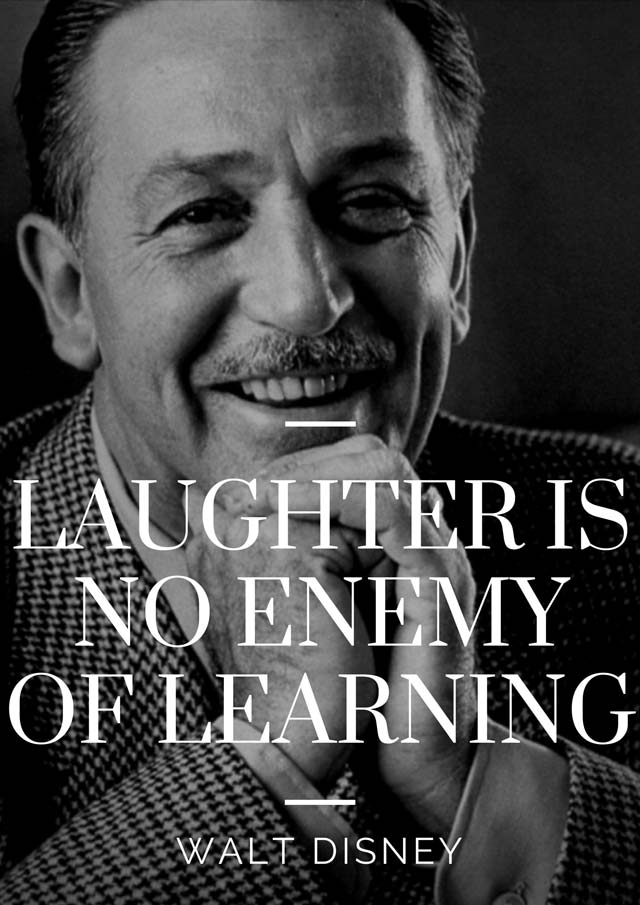 Defined by psychologists, a joke is an “incongruity that is recognised and resolved in some way.” But we don’t need a rocket scientist to tell us when to laugh. There are countless types of humour, some of which we appreciate more than others, and rarely do we stop to ask why we find a particular joke funny.

What if someone told you the reason you found a joke funny was because you had a high IQ? Or, alternatively, because you had a low IQ? You’d probably stop and think about the joke a little harder. The truth is, once you do start analysing the conceptual nature of humour, you quickly realise how similar it is to the way intelligence operates (through pattern recognition, but we’ll get to that later).

Science tells us there is a relationship between humour and intelligence, and while it may not be as simple as “slapstick=slow,” knowing how the two are related could prove to be a key factor in understanding the human learning process.

Begin a teaching career with an online Certificate in Education Support

Forty years ago, scientists were already asking this question. Hauck and Thomas, testing eighty elementary-level students, found a very high correlation between humour and intelligence (r = .91), but, of course, that was back in 1972.

So how has the picture evolved?

In 1990, biologist A. Michael Johnson published a study in Perceptual and Motor Skills that connected humour ability to problem-solving skills. Subjects rated 32 jokes for funniness and solved 14 visually-displayed mental rotation problems. Subjects with faster mental rotation times tended to rate the jokes as funnier, which suggests that the right hemisphere of the brain–often associated with problem solving ability–plays an important part in humour comprehension. Johnson’s findings were consisent with previous studies of patients with right-brain lesions, who struggle to distinguish between punchlines and non sequiturs when selecting joke endings in a multiple choice task.

In 1995, Holt examined the relationship between humour and giftedness in students. He suspected that intellectually gifted students would possess a more advanced sense of humour, noting that “many theories believe that the key concept of humor is understanding incongruity, and this involves a mental process similar to problem solving.” The results confirmed his suspicions, as gifted students recognised and produced more jokes that relied on word play and resolving incongruity.

Around the same time, researchers from the Department of Psychology at Case Western Reserve University in Cleveland, Ohio found differences in the comprehension, production, and appreciation of humour among students with learning disabilities.

The researchers found that children without handicaps comprehended the cartoons better than did the students with intellectual handicaps. Interestingly, though, they found no correlation between intelligence and humour production–in this case, the ability to complete captionless cartoons.

“The current study lends support to the prediction that effective humor production acts as an honest indicator of intelligence in humans,” the authors write.

In 2010, researchers at the University of New Mexico gathered 400 university students (200 men and 200 women) and tested them on abstract reasoning, verbal intelligence, humour production ability (rated funniness of captions written for three cartoons), and mating success. The results showed that both general and verbal intelligence predict humour production ability, which in turn predicts mating success. The authors go on to suggest that humour evolved at least partly through sexual selection as an intelligence-indicator.

One hundred and sixty-five college students viewed cartoons and either rated captioned cartoons for funniness or selected one of four captions and rated the combination for funniness. IQ was found to be positively related to comprehension. In addition, students who recognised the jokes as complex appreciated them more, and students who struggled to process the jokes appreciated them less.

All of this is fine and good, and proves that intelligence often results in a more advanced sense of humour. But what about humour’s impact on the brain? Is it a two-way street? Can cultivating a sense of humour actually make you smarter?

[Learn more about comedy in learning.]

“Humour is not about comedy; it is about a fundamental cognitive function,” says Alastair Clarke, author of The Pattern Recognition Theory of Humour. Here’s where the pattern recognition theme comes in.

Clarke defines humour in terms of pattern recognition–our ability to understand relationships and impose order on competing stimuli. “An ability to recognise patterns instantly and unconsciously has proved a fundamental weapon in the cognitive arsenal of human beings.”

Recognising patterns enables us to quickly understand our environment and function effectively within it. Language, which is unique to humans, is based on patterns. And humour, conveniently enough, is based on language.

Alastair Clarke explains: “The development of pattern recognition as displayed in humour could form the basis of humankind’s instinctive linguistic ability. Syntax and grammar function in fundamental patterns for which a child has an innate facility. All that differs from one individual to the next is the content of those patterns in terms of vocabulary.”

Stanford researchers have even begun to understand specifically how humor activates different areas in a child’s brain. Findings reported in the Journal of Neuroscience show that some of the same brain circuitry that responds to humour in adults already exists in 6 to 12 year-olds.

In one study, children watched short video clips while their brains were scanned with functional MRI. In children, as with adults, the funny videos activated the brain’s mesolimbic regions–the area that processes rewards.

“(It is) in a less mature state than adults, but it is already present in children ages 6-12,” says neuroscientist and child psychiatrist Dr. Allan Reiss, who led the study. “That’s really interesting.”

There was also high activity at the temporal-occipital-parietal junction, a brain region that processes incongruity or surprise. “A lot of humor is, in fact, incongruity. So you expect something to happen and then all of a sudden there’s a twist, something completely different happens and that’s what makes many jokes really funny.”

The process of resolution requiring the integration of conflicting alternatives is a model of frontal lobe function, while the emotional pay-off suggests an analogy with other phenomena (such as music) that link psychological expectancies with the brain mechanisms of reward.

“If you can interpret a difficult situation in a humorous way, as opposed to just ‘this is a terrible fate befalling me’, that could make a significant difference in how your brain and body responds to the difficult situation,” Reiss says.

Recent research has shown that the stress hormone cortisol damages certain neurons in the brain and can negatively affect memory and learning ability in the elderly. Researchers at Loma Linda University have delved deeper into cortisol’s relationship to memory and whether humor can help lessen the damage that cortisol can cause.

Gurinder Singh Bains et al. showed a 20-minute laugh-inducing funny video to a group of healthy elderly individuals and a group of elderly people with diabetes. The groups where then asked to complete a memory assessment that measured their learning, recall, and sight recognition.

Their performance was compared to a control group of elderly people who also completed the memory assessment, but were not shown a funny video. Cortisol concentrations for both groups were also recorded at the beginning and end of the experiment.

The research team found a significant decrease in cortisol concentrations among both groups who watched the video. Video-watchers also showed greater improvement in all areas of the memory assessment when compared to controls, with the diabetic group seeing the most dramatic benefit in cortisol level changes and the healthy elderly seeing the most significant changes in memory test scores.

“Our research findings offer potential clinical and rehabilitative benefits that can be applied to wellness programs for the elderly,” Dr. Bains said. “The cognitive components — learning ability and delayed recall — become more challenging as we age and are essential to older adults for an improved quality of life: mind, body, and spirit. Although older adults have age-related memory deficits, complimentary, enjoyable, and beneficial humor therapies need to be implemented for these individuals.”

Study co-author and long-time psychoneuroimmunology humor researcher, Dr. Lee Berk, added, “It’s simple: the less stress you have the better your memory. There are even changes in brain wave activity towards what’s called the “gamma wave band frequency,” which also amp up memory and recall. So, indeed, laughter is turning out to be not only a good medicine, but also a memory enhancer adding to our quality of life.”

Perhaps the biggest clue we have from science is the fact that it’s so difficult for machines to create good humour. Engineers have been hard at work for decades designing robots that tell jokes. Among the efforts are JAPE, the Joke Analysis and Production Engine; STANDUP, the System To Augment Non-speakers’ Dialogue Using Puns; LIBJOB, the light bulb joke generator; SASI, a sarcasm-detecting program; and DEviaNT, the Double Entendre via Noun Transfer program, which finds the perfect spots in natural language to insert “That’s what she said.”

Plus, for computer programmers looking for just the right witty acronym for the next big comedy computer, there’s the HAHAcronym Generator. But what have most of these attempts have revealed is that computers have a hard time telling anything but “dumb” jokes.

“Computers excel in working with simple, fixed data sets,” explain Joel Warner and Peter McGraw, authors of the book The Humor Code: A Global Search for What Makes Things Funny. “It’s why most joke-generating programs have so far focused on puns and other wordplay, since finite word lists and specific definitions are easy for computers to scan and parse. But most comedy trades in concepts that aren’t simple or fixed at all.”

The best comedy, they say, draws from a wide world of attitudes, assumptions, morals, and taboos–most of which aren’t even mentioned in the joke, just subtly hinted at.

“So if we aim to have computers truly ‘get’ jokes–much less to come up with their own and know when and to whom to tell them–we’re essentially going to have upload into them all of humanity. Plus…it seems pretty clear that good comedy breaks the rules and revels in the peculiar. And that’s exactly the sort of stuff computer programs aren’t very good at.”

Certainly, machines and human brains can’t be compared any more than apples and oranges, but these findings do hint at a sort of truth to the humour-intelligence theory. If human intelligence is capable of creating and interpreting humour in a way that computer programs aren’t, then maybe higher intelligence does indeed correlate with better humour.